From Denmark With Love

British forces have denied rumours that they released a plague of ferocious badgers into the Iraqi city of Basra.
Word spread among the populace that UK troops had introduced strange man-eating, bear-like beasts into the area to sow panic.

UK military spokesman Major Mike Shearer said: "We can categorically state that we have not released man-eating badgers into the area."

But the assurances did little to convince some members of the public. One housewife, Suad Hassan, 30, claimed she had been attacked by one of the badgers as she slept.

"My husband hurried to shoot it but it was as swift as a deer," she said. "It is the size of a dog but his head is like a monkey," she told AFP.

When it comes to being jumpy I am inclined to award Iraqis some leeway, because living in a swirling sandstorm full of camels and IEDs would put anyone on edge. Still, I'm surprised they believe the British are brash enough to release badgers into the melee. Everyone knows that badgers are quite harmless, even adorable creatures which do little but eat eucalyptus leaves and nap. Why, I do not believe that eucalyptus trees can even grow in Iraq without kangaroos to cross-pollinate them. I'm astonished by how difficult this hoax was to debunk. Despite its clearly improbable premise, most Basrans believed it. This story had more legs than many Marines. 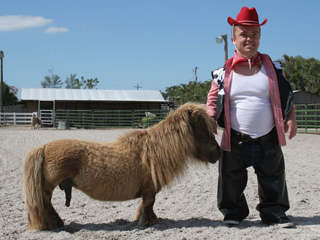 Surely this is the face of fearHowever, even if this tale isn't true, introducing another enemy into Iraq might not be a bad idea. In the Matrix man and machine truced in order to fight a common foe. A clone army of dangerous but disadvantaged adversaries might do the trick. However, I think they mustn't be badgers, for we've already established their nonviolent nature and introducing a cute creature into the fray would surely cause PETA and Camp Casey to fuse into some terrible antiwar superborg.

Since Iraqis are already fearful of vicious fleetfooted dog-monkey hybrids, I propose we harness this extant animosity and clone an army of Wee-Man. He has the proper proportions and features, and I'm sure he's been out of work since YouTube made Jackass obsolete. Diplomacy and direct action have both failed. Perhaps pugnacious pygmies riding skateboards and Shetlands through the sand is what we need to bring this ragged republic to life.

More News You Needn't Know Next