From Denmark With Love

Article: Chinese "elephant man" to go under the knife

When I first saw this video I was in class with the volume turned down. Without the benefit of background information, I could only assume I was watching a documentary about a graverobber who was apprehended while wearing Anna Nicole Smith as a hat. Of course, after discovering the poor man was riddled with a rare disease I felt mortified. Shunned for his looks by all but bloodhounds and endlessly accosted by thrill seekers and literalist hunters alike, his has been a life of lonesome contemplation. What did I do to deserve this? Is there a God and is He merciful? And where, in this massive melting quesadilla of a face, is my nose? It's been running for two years now and I think I may be drowning. 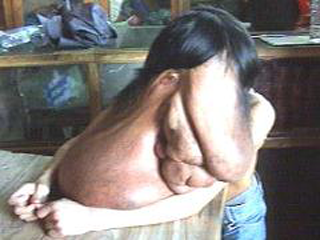 ruh roh rhaggyLuckily, recent reports say that Huang Chuncai came through surgery just fine. Though it was an expensive procedure, he's already making plans to capitalize on his newfound fame. Next week, Huang will kick off a tour to promote his new book on breaking up entitled How To Move On (With Your Other Half Gone).

But Huang isn't the only one reaping rewards: E! reports that his tumor just landed a lucrative role as Meat Loaf's body double. But even if these separate ventures fail, there's always the option of a wildly successful reunion tour. Heavy cosmetic surgery and a backing track will solve nearly anything in show business: just look at the Rolling Stones. Yes, there is no place for Huang to go but up, as his spine, freed from weight and shadow, unwinds and blossoms up towards the streaming sunlight, from whence all beautiful things, and also skin cancer, inevitably arise.

More News You Needn't Know Next