Avast, It Be Sunday! 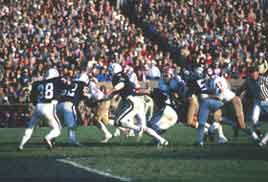 When I realized last week that I was going to be the one who had the shining opportunity to write the Super Bowl Sunday update for the site, one thought ran through my head: why didn't I realize that earlier? I mean, I write the update every Sunday, so of course I was going to write for the Super Bowl. A good deal of time passed, and then I was struck by another thought: I really don't know anything about football, or sports in general, for that matter. I'm not really a physical activity kind of guy. I haven't left this chair in going on three days and the only muscles in my body that haven't atrophied to the point of scientific curiosity are in my fingers. Take that as you will. My football knowledge is basically limited to the Patriots, and my Patriots knowledge is basically limited to the fact that they won the Super Bowl last year. I considered writing about the Pats, but I came to the conclusion that their chances of winning this year were severely hampered by their lack of participation in the game. Due to what must be some sort of NFL conspiracy, New England was conspicuously missing from the Super Bowl. In their place were the Buccaneers and the Raiders, two teams that I knew jack about. What was I going to write about. I thought long and hard. Buccaneers... Raiders... Buccaneers... Raiders... Buccaneers... Raiders. Then it hit me. 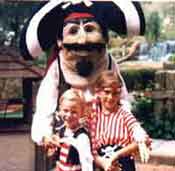 Watch out, kids! There's a pirate behind you!

Pirates. The two teams are from opposite sides of the country, but by some strange "coincidence," both of them are practically huge, steroid-addled advertisements for the dastardly, eye patch-wearing parrot-loving terrorist of the seas. While companies have to shell out hundreds of thousands of dollars for a few seconds of commercial time during the Super Bowl, every play from the initial kickoff on will be free publicity for peg-legs everywhere. I can't make any worthwhile predictions about which team is going to win the game, but I can tell you that one thing is certain - this is just the beginning. It's clear to me, and since all that I say and do is right, it should be clear to you, as well, that today's game is the start of a pirate uprising. By tomorrow, it will be impossible to enjoy a cruise or even a day of fishing without being boarded by a marauding bunch of hook-handed ocean bandits. Coastal towns will face endless cannon attacks and occasional pillaging. The age of the pirate is upon us. Luckily, since I have to fill considerably more space on the page in order to keep my job, I came up with a few small rays of hope. If one or more of these ideas are put into action, we may yet weather the pirate storm. 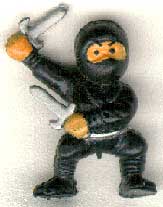 The pirates have a control over the oceans that not even the Vikings can challenge. However, extensive research done by reliable sources has made it clear that pirates do have one foil - ninjas. And if there's one thing that making up statistics has taught me, it's that New Jersey has more ninjas per capita than any other state in the Union. I don't exactly know why that last one is true, but then, there are many mysteries to today's modern ninjas. In any case, that's why it makes perfect sense to base the NFL's first all-ninja football team in Trenton. Since they are ninjas, the team would not be concerned with the glory of Super Bowl victory. Their minds would instead be as focused as their lethal strikes on their ultimate goal: eliminating the pirate teams once and for all. The Deathninjas' lightning-fast killblows will undoubtedly bolster NFL ratings while simultaneously resulting in the maiming or death of every Raider or Buccaneer in the game. Of course, the DeathNinjas can't play in the NFC and AFC simultaneously, so one of the pirate teams will have to be allowed to survive long enough to make it to the Super Bowl. Unfortunately, that means we'll have to suffer the rule of the pirates for a full year, but the utter devastation of the remaining team by the Deathninjas at the most televised game of the year will send a clear message to swashbucklers everywhere - you're not wanted here. It won't be long before the actual pirates, by which I mean the ones who don't so much play football as they do loot harbors and merchant vessels, turn tail and run. As for the ninjas, without any enemies left to battle, they will kill themselves honorably. That really works out for the best. After all, who the hell would follow a football team based in New Jersey?

Here's what we know about pirates:

1. There's nothing they love more than booty.
2. They get most of their news from tavern gossip.
3. With all their plundering, pirates have little time to listen to modern music.

We can exploit this information to set up a trap that not a one of them will be able to resist. What we have to do is slip a little rumor into the pirate news circles - easily accomplished by a well-placed drunkard - that the contents of a certain building are one hundred percent bootylicious. The building in question will be none other than the home of music group Destiny's Child. I make the assumption that, like all bands, all three members of Destiny's Child live in the same house. By the end of the day, the girls' home will be swarming with every cutlass-brandishing water-bandit that ever set foot on a ship. That's when we firebomb the bejesus out of the house. Bam! No more pirates, and better still, no more Destiny's Child. I swear, if I hear "Say My Name" one more time, I'll stick forks in my eyes.

Sure, we all know that pirates want treasure. Our treasure. But what do they do with the treasure once they have it? They're thieves, it's not like they're that concerned about collecting money in order to buy things with it. Instead, the moment they get their hands on some treasure, be it a chest full of gold doubloons or a change purse, they sail off to some island to bury it. The idea, I think, is to bury treasure so that other pirates can't get it. Maybe there's some point at which all the pirates unearth their ill-gotten goods and compare who managed to get the most, like some sort of contest or something. I can't say for sure, I'm not a pirate. Now, with the boost that the Raiders vs. Buccaneers Super Bowl is going to give them, some pirates are inevitably going to get their hands on some treasure, no matter how much we try to fight them off. It's best if we just let them have whatever they want. In fact, I think we should set out some large treasure chests on the docks of our nation's largest ports. Now, it may seem like we'd be letting the pirates win, but we'll have an ace up our sleeves. Each chest will be equipped with a remote-controlled rocket. Since no one has any interest in space travel any more, NASA has nothing better to do than strap rockets to treasure chests, so this won't be too tough. When the pirates bury the chests beneath the sands of their hidden islands, we'll activate the rockets, sending the chests flying up to the surface and forcing the pirates to bury them again. At that point, we'll just blast the chests right out of the sand again. It's a cycle that can go on for days, but eventually, the pirates, who are too paranoid to abandon their booty, will die. I'm not sure how, exactly. Maybe they'll starve to death. I don't know, I haven't really worked that part out.

These methods aren't foolproof, but they're the best I could come up with on short notice. We don't have much time to prepare for the pirate menace. At 6:00 PM (7:00 Central time), the game will begin that will herald the end of our comfy little civilization as we know it. There's nothing left to say except to get ready for the worst. Oh, and Raiders - 24, Buccaneers - 17.