NFL Protests Have Made My Rowdy Friends Significantly Less Rowdy 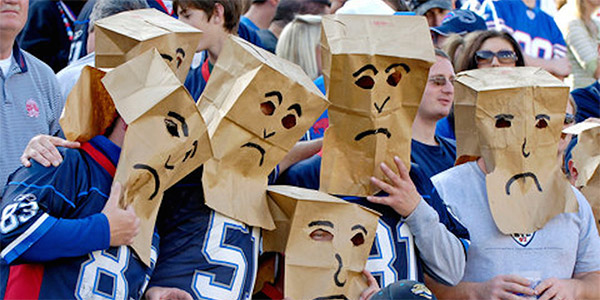 Fellas, it's that time of year once again: Of course, I speak of those all-too-brief 17 weeks known only as "football time." It's the annual season where a man can retreat to his favorite easy chair, sit back, and absorb hours upon hours of pigskin action that conveniently includes eight minutes of commercials for every three plays so you have plenty of time to go to the bathroom or make a beer run. And often, we are joined in this thoroughly American past time by our friends, who often arrive rowdy, or naturally grow rowdy over the course of a game. But if science were to invent some sort of "rowdiness meter," and I pray one day they do, it would show that our rowdiness levels are at an all-time low this year.

When I want to unwind after a long week at the chili factory, the last thing I want to think about is politics. The second-to-last thing I want to think about is chili, but I've made my peace with those Hormel commercials. Now, I'm not sure why all these NFL players are kneeling, and I frankly don't care to find out. But I do know it is immensely disrespectful thanks to the informed newsmen who told me so. In fact, I have stopped kneeling in church after learning that meant I was actually telling God to "sit and spin" or some such thing. After refusing to convince our priest of this, I roamed our community, looking for a house of worship that wouldn't allow these vile insults to our Lord. We finally found one, and even if it's 60 miles away and the service mainly involves passing around a box of dangerous spiders, I'm proud to have washed my knees of kneeling forever.

And it's not just me. Whenever the gang comes over, I can see all of these protests taking the wind out of their sails. Normally, when the anthem would play at the beginning of a game, we'd pass those seconds once again arguing who would swap wives with who if the wives would allow it, or tossing pork rinds into each others' mouths in a game not unlike basketball. But now our revelry is rudely interrupted by the horrifying sight of men kneeling quietly while some lady is going on about ramparts and things. I'm not exactly sure what ramparts even are--I believe they're fancy horses that kings ride on--but right now, our boys are fighting for those things and several other things. I could never serve thanks to my debilitating hammer toe, but I still respect those brave boys and whatever they're doing over there in those sand countries. And I do my part by replacing the magnetic yellow ribbon on the minivan annually.

Football used to be fun--now my buddy Stan Peppercorn doesn't paint his face and entire body before coming over to watch the game. The wife may like this change because Stan no longer gets paint on the toilet and bathtub when he vomits in the toilet and falls asleep in the bathtub, but I've always argued it's easy enough for her to clean up. Dub Dobson used to be the star of game night with his special recipe, a bag of Fritos and a jar of Fritos bean dip, but now he only brings several Chinese takeout containers for himself that he eats out of, trough-style, in complete silence. Frankly, I can't think of anything worse than our current situation. Maybe getting killed by an authority figure and then having said authority figure face no punishment. But that's a big maybe. If things don't go back to the way they were, we may have to do something drastic. But we all agreed we'll only switch to soccer if we can't figure out a suicide pact that we all agree on. So, fingers crossed.