To Hell with Me

I thought for sure I had a few decades left in me, but I guess that was just wishful thinking on my part. Had I known death was so imminent, I might have lived a better life and avoided pirating so many mp3s. The last place I imagined retiring was Hell.

Hell is a tough pill to swallow. Besides the constant chaos and pandemonium, there's a lot of naked people screaming and getting tortured horrifically. I wish they would keep that sort of thing confined to certain areas, because there is some seriously amazing scenery. I almost wish I had a camera, but I guess I'll be seeing these sights every day. 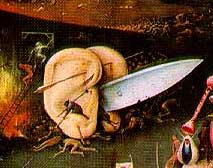 One of the first things in Hell to catch my eye was a crazy parade float. It was these two enormous ears pierced together by an arrow, and with a humongous knife sticking out from between the two lobes. I guess they must have some pretty creative businesses or clubs or whatever here, since the float was obviously the result of great care and effort. I wanted to get a closer look but it was surrounded by all these naked dudes writhing around and moaning. One of them was tearing out his eyeballs. I'm not really cool with that whole scene, so I decided to move on. Besides, there was a huge marching band headed my way and they looked kind of menacing to say the least. 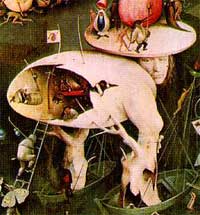 Whenever you're in a new place, the best thing to do is get a lay of the land. It helps to do that from a higher vantage point. I learned that from a TV survival show, and while I wasn't lost in the jungle, it seemed just as practical here. I took a look around and the highest point near me was this giant with his backside cut off and his insides were all hollowed out. Lucky for me, there was a ladder leading up into his insides. I politely waited my turn as some fellow lost souls made their way down the ladder, then climbed up.

When I reached the top I was left severely disappointed. The view was far from reassuring. In fact, it was downright depressing. In every direction there was naked flesh being burnt, stretched, and stabbed. There were weird animals all over the place. I bet a cryptozoologist would shit his pants in excitement here. Too bad somebody trained these animals to be jerks and carry knives.

I looked down at the frozen river below me and saw that some poor sap had fallen through the ice. He was trying to get back on his boat, but not having much luck. I figured I had better go see what I could do to help, so I climbed down the ladder and moved toward the ice. I had to turn away when this little armless ferret guy with a bow and arrow started coming towards me. I'm all about helping out when I can, but no way am I making enemies with a creature like that. Something tells me that guy wasn't going to drown anyway. I'm pretty sure you can't die in this place. If you could, everybody would have checked out already. 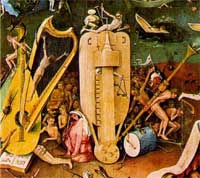 Needless to say, I was feeling pretty bummed out and was looking for a little excitement. There was some kind of wicked jam band playing not too far from the shore, so I moseyed on over to check them out. Unfortunately, they were pretty terrible. I give them a lot of credit because they were playing under difficult circumstances. A lot of them were being stabbed or eaten and their instruments were just fucking ridiculously oversized. Even with all that craziness going on, I bet if this band showed up at a GWAR concert, they would be laughed at for looking too normal.

Still, I hung around for most of their set, which was kind of avant-garde and hard to get into. They reminded me a bit of Philip Glass I guess, but with gigantic classical instruments and a lot more screaming in agony. I mostly stuck around because there was this little egg dude hanging out, and he seemed pretty cool. I called him a little egg dude, but he was pretty huge for an egg. He was short, though, so he's just Lil Egg Dude to me. I didn't get much of a chance to talk to him, but he seemed like somebody that I'll probably try to hang out with later. I bet he's got some great stories.