The day starts off like any other. The guard at the front gate apologizing as he pricks my finger for DNA analysis, a security measure we instituted after one of our rivals hired some third-rate con man to get mutilated by a plastic surgeon and pass himself off as one of our data analysis clerks.

The poor guy's hands shake as he presses a white disc no larger than a dime against my finger and collects a droplet of blood. I'm not bothered one bit but I stare him down wordlessly, imagining myself as Superman using heat vision to cut through a diamond that I really hate. Instilling fear into the hearts of your subordinates keeps them sharp. 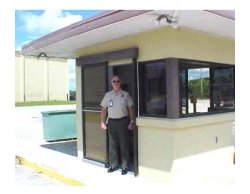 The guard swipes the disc through a holographic display which lights up green, disabling the sentry guns flanking my car. The four-foot thick steel gate rises until it's precisely one centimeter higher than my front hood. As I pull forward, the gate follows the contours of my Jaguar, snapping shut the instant the back bumper is clear. Our staff has long since given up on bumper stickers, as they're routinely sheared clean off. Initially there were some complaints but they were dealt with. Now the prevailing wisdom is that bumper stickers are sort of tacky to begin with, and certainly not worth, say, losing an eye.

My assistant waits for me in the narrow hall of the Observation Walkway, her hands behind her back and a pleasant smile on her face. No clipboard or PDA. She keeps everything in her head, which is why I like her so much. If I have to pull a burn-and-run one of these days, only one piece of evidence will need to be incinerated.

"Good morning, mister Forrester." This is where a writer usually inserts the name of the character that's speaking, but I never felt compelled to learn hers. Her light blonde hair - almost white - has been cut in a bob and she's got small tits, if that helps. "Shall we begin?"

I nod and step onto the moving platform with her. The Observation Walkway is really just a thin corridor that circles the compound's perimeter, with a twenty-foot thick outer blast wall made of god knows what to the right and a floor-to-ceiling bulletproof glass window overlooking the every room in the facility on the left.

"Everything going according to plan?" I ask, adjusting my tie. A lingering droplet of blood from my finger clings to the Parisian silk. Nice. Four hundred dollars down the drain.

"All teams are reporting nominal progress. A few broken bones in the storage level, but we're still well within this quarter's injury projections."

Turning to my left, I take in the first of the facility's test chambers. A brick wall has been constructed on one side of the room. Fifty yards away, a minivan secured to bright yellow tracks that lead directly into the center of the brick wall. In the place of a crash test dummy, a humanoid figure made entirely of bricks sits behind the wheel. The van lunges forward and collides with the wall at forty miles per hour. As one clipboard-wielding scientist opens the door to survey the damage, chunks of brick spill to the floor. The man brings a hand to his mouth, but he is unable to hold back the vomit.

"Next time," I tell my assistant, "replace the minivan with a car made of bricks. And have that man killed."

And so it continues, each test chamber a different story. A lone brick suspended carefully in a wind tunnel that floods with bricks instead of wind. The particle accelerator retrofitted to send two brick particles on a collision course at the speed of light. The 20-piece brick drumkit.