Soon, a voice over the intercom. One of the holdovers from my predecessor's administration is causing trouble. Try as I may to work these people into the new way of doing things, they never cease being a pain in my ass.

Five minutes later I'm in my office, sitting across from a low-level IT guy by the name of Mason. Young dude, ridiculous emo haircut with those spikes in the back and long hair that's moussed down straight in the front to look like he just came in from the rain. I don't know whether people are being ironic or serious with this shit anymore, so I just assume they're all idiots.

"Mr. Forrester," he begins, "when you first showed up you asked us to trust that all of the changes you made were for the best. That our work was important."

"Well, that's the thing. All this work with the bricks..." he twirls one hand in the air and squinches his eyebrows. "I don't understand any of it. No one out there knows what we're working toward. What's the end result? No offense, but this has become the worst public library in the state since you took over. I took a job here to help people discover Proust and instead I'm doing God knows what with bricks."

"Proust was a hack, and his best ideas died with him a hundred years ago!" I slam my fist on the desk, bringing the total number of Proust-induced dents on the surface to four.

"Whatever. I'm telling the media everything I know about this place. Something shady's going on here. I can't piece it together, but I'm sure someone out there can."

"No, wait." I fumble for a hidden button below my desk and press its well-worn surface. "Maybe you're right. Perhaps I've taken this place in the wrong direction. Forgotten what the library business is all about."

Mason grasps the arms of his chair, halfway between standing and sitting back down. He's still young, idealistic enough to think he can change things. 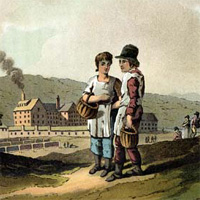 "I'd like to make things better." I stall, being very careful not to focus on my assistant as she pauses in the doorway behind Mason. In her gloved hand is a cyanide-covered brick. If he turns around, she'll either have to duck back out and lose her chance or lunge forward and take him head on. "Do you know how I plan to do that?"

"How?" Mason takes his seat once again, and my assistant closes the distance, the brick raised high above her head.

The brick comes down, giving the blood droplet on my tie a few unexpected guests. It's a good thing I keep a spare change of clothes in the office.

"Have the cleaners remove Mr. Mason's teeth and fingers," I say as I blot Perrier on a handkerchief and wipe at my face. "Then dump the body at one of the abandoned factories on the outskirts of town. Under a pile of some sort of cheap building material that can be found most anywhere. Something that's relatively small but heavy and uniform in nature. Something that can be stacked."

"Hrm." I stand naked at my window and watch as malnourished children no older than eight years old unload bricks from the backs of trucks streaming in from every corner of the world. The corner of my mouth contorts in a sneer. "Cinder blocks."