Last week, former Stanford University swimmer Brock Turner was released from prison three months early. During his trial, he promised to go on a speaking tour to warn fellow students about "drinking & promiscuity." Here's some highlights from his tour. 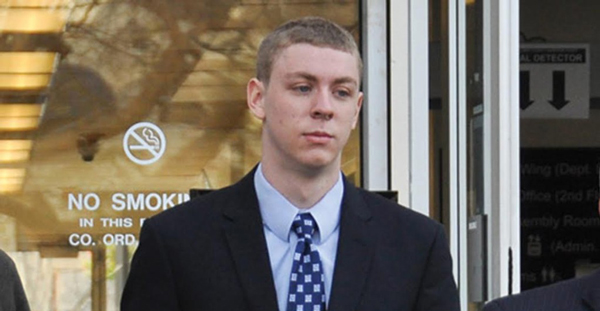 4:30pm: A pickup truck filled with water pulls up to the venue. Up from the water emerges BROCK TURNER, who was holding his breath the whole time!

4:35pm: Brock's mommy and daddy towel him off and help change him into his "innocent boy" clothes.

4:45pm: Brock's street team unfurls a banner that says, "Sobriety: Don't Take NO For An Answer!"

5pm: Brock Turner air-swims across the stage, kicks over the mic stand and screams, "Are you ready to learn the absolute basics of human interaction?!"

5:05pm: Brock Turner give chocolate gold medals to those who know the difference between a 'rapist' and someone who was only convicted of 'assault with intent to commit rape.'

5:10pm: Brock pulls out a bottle of vodka marked, "Crime Juice." He throws it in a garbage marked, "Your Future." Confusing!

5:11pm: The first of Brock's three mandatory snack breaks for his favorite foods, such as pretzels or chips.

5:15pm: Brock talks up the amazing careers still open to convicted sex offenders, like speaking at colleges about how not to do the thing you did.

5:20pm: Audience member asks, "Will your dad still give me $20 if I leave early?" Brock responds by calling the man "a puss-dawg," offers to "throw down." Later, his mom will say that he did not do this.

5:30pm: Brock reads a heartfelt, tear-filled apology to "the one he's hurt the most in all this...the fine sport of swimming, and it's inventor, Kevin Swimmington."