Hey, you're the new number cruncher, right? First day on the job is always a little awkward. Follow me, I'll point out everyone you'll be working with.

You've met Alice, my assistant. She knows more about this place than I do. If you need help with anything, talk to Alice. If she's not available, leave a message with one of her secretaries. I can never remember their names, but all twenty seven of them have graciously agreed to collectively assume the name "Erin". 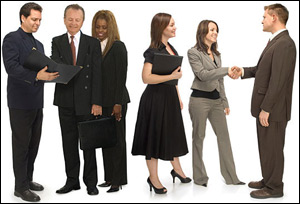 There's Cooper! Great guy, that Cooper. You know how people like to roll discarded sheets of paper into balls and toss them into the trash like they're making game-winning basketball shots? That's Cooper's job. Just give all your unwanted paper - or any actual basketballs that you're looking to dispose of, I guess - to him and he'll take care of the rest. The guy to Cooper's left is Adam. His job is to pick up all the shots that Cooper misses and properly dispose of them.

Sam is the head of our experimental weapons division. When you have a few minutes to spare, I highly recommend that you ask Sam for a guided tour of his work. He's got trebuchets conducting behavioral studies on chimpanzees, switchblades making dioramas of volcanoes - with dry ice and everything. It's amazing!

The stern looking guy guarding that supply room? He's Travis, and he oversees the distribution of all construction paper, glitter, dry macaroni, paste and safety scissors. Don't even think about slipping one by old Travis.

There's Leonard, our in-house lawyer. Right now we have him looking into the legality of seeking council from a man whose entire collection of law books were stolen from the flea market. Progress has been relatively slow, but the last time I spoke to Leonard he seemed very pleased that he was able to get into the fourth book of the Left Behind series without having read the first three.

Albert over there takes care of all the horses. His assistant, Crowley, trains them not to panic when we place glass bubble helmets over their heads and submerge them in water.

See that woman with the aviator cap, goggles, and the long white scarf swung over her shoulder? No, the one with the red hair. That's Claire, our biplane pilot. We don't have a biplane yet, but we figure it's a good idea to have a pilot ready for when we get one. The other pilot is Samantha, she just flies our corporate shuttle.

The guy with the glasses in the corner is Neal, our IT guy. If you see a clown hanging around, tell Neal immediately.

You've probably noticed the platinum plated device adorned with glowing, otherworldly crystals of varying shapes and gravitational pulls. That's our fully-functioning hologram recorder and projector. The woman that's frowning at it is Kim. Her job is to figure out what we're going to do with the thing.

Owen is the guy wearing the headset. He's our operator. We haven't had any injuries requiring surgery in months, so mostly he just sits there playing Xbox games.

As you can see, Kirsten controls Office Bot: The Bot That Tries To Deliver Mail. Office Bot is great. Sure, he's four times as slow as a human, and his egg-beater hands shred more letters than they deliver. We still love him, though. The guy tagging along with Kirsten is Vincent. He's gauging the relative efficiency of the current fuel that Office Bot uses: American currency. Unless we see some improvements, we might have to make a switch to gold.

Ah, here's your desk. You've seen pretty much everyone, aside from a few dozen members of the espionage division that are out on assignment. Now, are you ready to help me find out why this hot dog cart can't seem to make a profit?