Charlie Sheen's PR group has been waging a valiant attempt to blur the lines between the actor's drug-addled, physically abusive real-life behavior and the fantasy of a good-natured normal guy whose perfectly innocent actions have been misinterpreted by the entire universe for seemingly no reason. 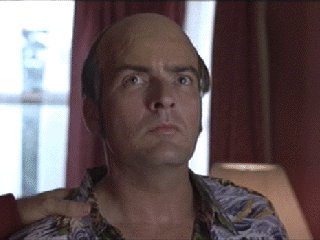 When the actor was recently rushed to a hospital after throwing a 36 hour porn-stars-and-cocaine party, his publicist actually claimed that he had simply laughed too hard while watching television, aggravating an existing hernia.

The fact that he entered rehab immediately after leaving the hospital obviously backs up this story, as he probably wanted a room that was free of potentially harmful televisions.

Last year, when Sheen's drug abuse problems were being discussed in the media more than ever and his life appeared to be in danger, his manager claimed that he "went to Charlie's house, entered a side door and saw Charlie sitting on the couch eating a turkey sandwich, saying, 'Way to knock, dude.'" When asked if his life was in danger, the manager says "Charlie looked at me like I was nuts." This perfectly clean, plausible, and not in any way fabricated story proved that no drug use was going on in that timeframe.

You have to admire the sheer gusto on display when a PR team helps a troubled client distort reality, effectively helping his or her self-destruction along by minimizing a dangerous situation and giving the illusion of control to someone that has lost the facility to make decisions.

Being the helpful sort, I've come up with a few wholesome stories that Charlie Sheen's PR can whip out when their client makes his next public fuckup.

Charlie Sheen gets super high and runs his car off the road, responding emergency workers discover a trunk full of cocaine bricks.

"Contrary to reports, Charlie was not intoxicated. He simply made the mistake of tuning into a radio station during its nightly broadcast of lullabyes. He fell asleep instantly, as any of us would.

As for the cocaine, that was an unfortunate mixup. Being a stand-up guy, Charlie was simply delivering props for one of the crew members of his hit show. The cocaine bricks were fake, but an error in the manufacturing process apparently resulted in the harmless white powder turning into actual cocaine."

Charlie Sheen gets into a heated argument with NASA, then sticks his leg out as a shuttle is launching, tripping the craft and killing everyone on board.

"Charlie is as saddened as anyone by this horrific tragedy. It seems that people believed he was arguing with NASA when he was, in fact, asking if they really wanted him to stick his leg out on the launchpad for added stability.

Amidst the roar of the rockets he had to repeat himself several times at increasing volumes, which must have looked very much like angry yelling.

Unfortunately, despite the efforts of everyone involved, there must have been a communication breakdown, as NASA's instructions to Charlie cost those poor astronauts their lives."

Charlie Sheen finds a wallet on the ground, makes his way to the owner's house, then eats the wallet in front of the horrified man.

"Do I really need to comment? It's quite obvious that this was a simple act of kindness. Returning the man's effort took so much out of Charlie that he had to replenish his spent energy somehow. The man's wallet didn't survive, but isn't it the thought that counts?"

Charlie Sheen secretly confers with the Molemen for several weeks, emerges from their Council Chamber to announce that he has enslaved humanity in exchange for his personal freedom and a copy of Sickman's College Chronicholes Vol. 12, then holds the microphone up to his butthole and strains until he produces a weak fart.

"I just got off the phone with Charlie, and he is absolutely devastated. He believed that he was filming an improv film along the lines of I'm Still Here. Charlie would never knowingly enslave the human race.

He wants all workpen inhabitants to know that this mixup has troubled him for days. I can personally attest to the fact that he hasn't come out of his hot tub all afternoon, and it's impossible to tell where his tears end and the champagne begins."

"I heard this rumor about Charlie being dead, so I popped into his house and he wasn't even there. All I saw was half a turkey sandwich a note saying how sorry he was, presumably for not cleaning his plate before he left. Honestly, I have no idea where you people come up with this stuff!"