The folks at Skymall follow a simple marketing strategy: target people when they're weak. Since commercial air travel makes folks fear for their lives, they'll be happy imagining any future on the ground, even one surrounded by the dumbest products on the planet. As part of their probationary restitution, Nick Arizona and P. Jordan Dimebag sat in on Skymall's holiday focus group and produced the following observational log. We hope this seven-part guide aids in facilitating a festive holiday shopping season! Check out the previous guides here: Part 1, Part 2, Part 3, Part 4, and Part 5. 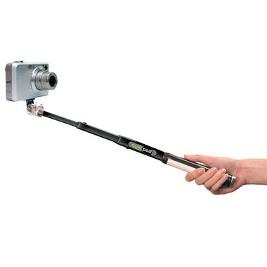 The world's first extendable hand-held tripod, this clever telescoping wand is just 7 1/2" long folded and weighs only 4 oz, yet it extends to 18 1/2 so you can include yourself in photos or videos without relying on strangers. It even has a built-in mirror that allows you to preview each shot. (Skymall)

P: A "built-in mirror to preview each shot"? You already know that every picture you take with this will make you look like some guy hassling the cameraman on COPS.

N: I can't find fault with the QuikPod because I advocate a blanket addition of a truncheon to every modern electronic device. Cellphone? Cellphone on a truncheon. GPS for your car? Poke at it with a truncheon.

P: Sure, this will cut down on Popeye forearms in most MySpace photos, but at least holding your arm out can be played off as casual. The QuikPod is a corporeal reminder you have no friends.

N: That's a small price to pay to be able to pretend you're a nightstick-wielding British bobby looking for Jack the Ripper every time you take a picture. It'll add even more of a poorly-defined Gothic atmosphere to every picture it takes, which would save the savvy LiveJournaler hundreds of dollars in smudgy eyeliner each year.

P: Imagine the Rodney King beatings from the POV of the weapons. Like, they would have gotten off had they not put up pictures of the beatings on their Facebook profile. "Should have set that to private, Johnson."

P: This vastly increases the number of areas you can pull the old "back somebody into something dangerous under the guise of taking their picture" because it brings them that much closer to the precipice. You start with it compressed, then telescope it with each step they take.

N: I like how they play up the security aspect by not asking you to "rely on strangers." I can't help but think that there are few more attractive theft targets than a tourist gingerly holding a $400 digital camera on the end of a long stick.

P: I suppose someone could ease into trusting strangers by holding the QuikPod but having a passerby operate the camera. The moment the camera's owner gets uncomfortable, he zips it out of the Samaritan's hands like a dollar on a fishing pole.

N: And as you grow more at ease, you could extend it less and less until eventually the stranger is eating right out of your hand. You could rub their velvety nose and softly tell them they're a beautiful girl, and they'd whinny with delight.

P: The further technology advances, the closer we are to living the Lady and the Tramp futuristic version of eating the same piece of spaghetti. You could also get pretty coquettish at this point, but that would just be your deeply-ingrained photography skills of not trusting strangers.

N: Technology is taking its cues from carnival concessions. How can you improve on the camera? Well, what about the camera on a stick? It's only a matter of time before we deep-fry that sucker and drop it when we go upside-down on the Gravitrex.

P: Further development of this device may eventually allow us to take photographs from space, but what if the technology gets out of our hands? A society dependent on QuikPod technology is one risking a perpetual keep-away with all of its gadgets. "Help, my pacemaker, it's two-and-a-half feet in front of me! Where's the phone?" And it's the Tantilus myth realized.

N: The worst part about this is you can't reach the shutter. You'll have to set the timer and wait while your camera beeps away the seconds of your life as you stand frozen, a friendless and reviled figure, desperate to hide the shadows of your premature beer belly from AnarrchyGrl89.

P: The only good timed pictures would be of sword fighters. Most people wouldn't even bother with the timer, so their pictures will be of frustrated people who just banged their camera for the umpteenth time, flashing a half-assed smile in the hopes that this time whacking the fridge pushed the shutter button.

N: The QuikPod begs a sister product, the QuikWand, which would let you press buttons on the camera from 10 inches away (8-inch extender $9.95, sold seperately).

P: They'd be non-corresponding lengths so you'd have to get five QuikWands and three QuikPods, and mediocre standup comics would have fodder for another wave of hotdog/hotdog bun jokes.