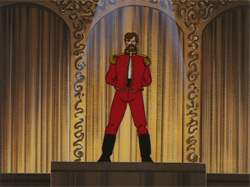 "Welcome to my stupid nightmare!"The Cossacks herd the Joes into the city's golden church, where they are greeted by a man dressed like a nutcracker and claiming to be the descendant of the original bearer of the Great Seal of Alaska. He explains that his great grandfather decided they would live apart from the modern world and it was this isolation that allowed them to thrive. He goes on to claim he wants no part of the Joes and their modern problems. That's all well and good but there are two glaring problems. One, most of the Cossack guards have some type of machinegun, and two, if he didn't want their problems then he probably shouldn't have kidnapped them.

Adding to the drama, the nutcracker king has brought the Joes to the church that holds the real Great Seal of Alaska on a pedestal. It's like dangling packets of Lick 'M' Aid in front of a hyperactive ten year old. Duke tries to explain that all the Joes want is the Cossack's most precious artifact so that they can prevent Alaska from falling under the inept management of Cobra. The nutcracker is hearing none of it and orders the Joes to be taken to the Romanov and "put with the other prisoners."

The Joes find themselves thrown in the ship's brig alongside their enemies from Red October. Gung-Ho throws a short tantrum and Duke blames Red October for ruining their mission and letting Cobra have Alaska. No sooner has Duke wrapped shooting on Big Baby: The Movie than explosions erupt in the Cossack city. 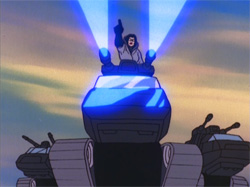 "Cobrraaaaa!"The Baroness is leading an armored Hiss tank assault on the city, blasting apart blue stone and/or ice wherever it crosses her path. Duke and his counterpart in Red October are equally horrified by the tableaux as Cobra forces rampage unchecked through the 19th century city. Imagine drunken Marines in LVACs driving around historic Williamsburg and shooting at reenactors and you have some idea of the carnage.

A few stray shots blast a hole in the side of the Romanov, but the Joes can't escape in time to stop the Baroness. She drives a Hiss tank through the front door of the church and snatches up the Great Seal of Alaska. The Baroness and her victory cackle are cut short by the Cossacks. When the Cobra tanks come under concentrated fire from the surprisingly well-armed luddites, Cobra beats a semi-hasty retreat. 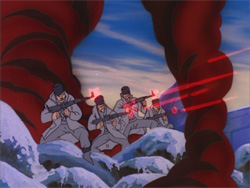 It's like the Amish playing Guitar Hero.Nutcracker king commiserates with Duke and Red October that, if only he had listened, the ruin of his city could have been avoided. Duke seizes the opportunity to pledge that Joe will help rebuild the undiscovered country if only the Cossacks will help the Joes catch up to Cobra and stop them. The leader of Red October similarly pledges his support.

The Joes, Red October, and the Cossacks set out on dog sleds (seriously) utilizing a shortcut through the mountains to get ahead of the Cobra tanks. Once they're well ahead of The Baroness and her armored detachment, the allies set up an ambush with RPGs and laser rifles. That the Cossacks apparently had. The Cossacks that have refused all contact with the outside world since the middle of the 19th century. 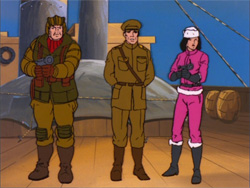 Thos Bolshi scum! The Baroness and her armored column attempt to ford a river and are attacked by GI Joe and their new allies. The battle is short and humiliating for Cobra. Their Hiss tanks are all disabled almost immediately and the battle devolves into hand-to-hand combat on the tanks. Even though the Cossacks are wielding swords not a single person is seen being stabbed or hacked with the blade. Even Cossack cavalry succumb to the curse of GI Joe.

The Joes return to the city with several captured Hiss tanks, but suddenly there is a pressing time issue. I guess the Joes are actually worried that if the used car salesman's deadline is allowed to pass Cobra will forcibly evict every citizen from Alaska.

The heat is on, but Duke has an idea. He asks king nutcracker if the Romanov is seaworthy. With a firm "da" despite the damage suffered in the attack, the Joes ready the steamer for travel. The only problem is that the Romanov is trapped behind ice in the harbor.

No problem for Duke, who aims the cannons of the captured Hiss tanks at the ice and blasts it to oblivion. Nah, don't bother taking the Hiss tanks to Juno, you should take this 150 year old steam ship through treacherous waters. I'm sure it will be faster!

Once the Romanov is underway, the filthy Red October scumbags turn the tables on Gi Joe. Leveling their guns at the Joes, Red October confiscates the Great Seal and announces the ship will be heading to Russia. Not surprisingly, this angers Gung-Ho.

No sooner has this ugly betrayal been revealed than Cobra Rattlers dive from the clouds, launching volleys of missiles at the Romanov. This sequence is really a sad testament to the inability of Cobra to deal with any sort of threat, no matter how feeble. In this case you have five jet turbine aircraft launching guided missiles at a 200-foot long steam ship made out of wood. What is the result of the initial attack? The ship is undamaged and one of the Rattlers is shot down by small arms fire. 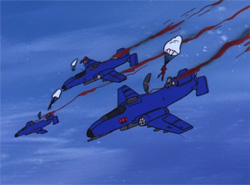 Another sortie for Cobra's elite pilot corps.A single missile strike should have reduced the Romanov to driftwood. The target was so large there was no need for the aircraft to fly within small arms range to destroy the vessel. Even green pilots from a third world country's air force could have achieved better results using aircraft and weapons from the 1950s. There is no excuse for this baffling incompetence on the part of Cobra's supposedly trained pilots.

A second run by the Rattlers does finally produce some hits. A missile lands a glancing blow on the Romanov's smokestack. But the Cobra pilots have no time to savor their miraculous victory as GI Joe Skystrikers swoop from the clouds and decimate their force in seconds. Parachutes open over the Arctic ocean, but Cobra has surrendered air superiority over the battlefield to GI Joe. Without the immediate assistance of Search And Rescue teams, the Cobra pilots are doomed in the frigid waters.

Duke demands that Red October return the Great Seal now that GI Joe controls the skies and they reluctantly agree. Nothing more is said of Red October, but given their betrayal and the deaths of Joe forces in the earlier avalanche I expect GI Joe transported them to POW camps.