The Rambunctious Rhymes of Groggery Gibbonman

Groggery Tirade "Grog" Gibbonman was hailed by his contemporaries as a master of poetic rhythm. His collections of verse have been published in 165 languages. Of particular note are his nursery rhymes, the first printed edition of which was presented to the young sons of Sultan Aleksivus III via messenger as an act of war. 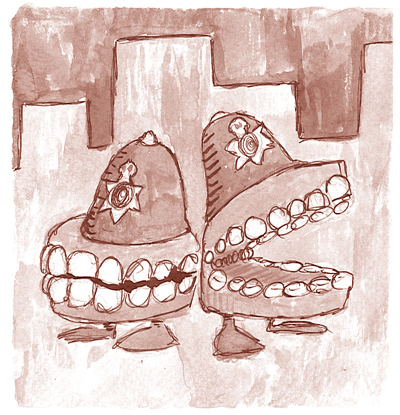 Chomping Teeth and Chattering Teeth
Were hired by the town police
As temporary deputies.

Chomp enjoyed his newfound work
Turned quickly into quite the jerk
And oft-proclaimed he “loved the perks.”

Chatter was much more annoyed
The only part that he enjoyed
Was being drunk whilst thus employed.

But then, at noon one fateful day a robbery ignited.
Chattering Teeth and Chomping Teeth were there with culprits cited.

Chomping Teeth and Chattering Teeth
Fired upon the town police
After killing all the thieves.

Chomp had seen his one big chance.
Took the money, did a dance.
With ten good men’s blood upon his hands.

Chatter looked out on the dead
Then turned his gun on his own head
Instead of jail, just died instead.

And so I say, with great relief.
No longer do we make police
From children’s wind-up plaything teeth. 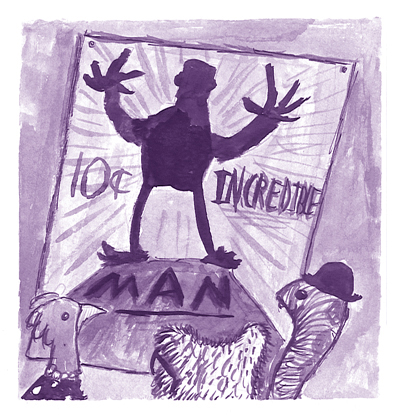 All the creatures came to see a human at the fair.
“Come gander at this specimen so strange!” they hollered there.

“My goodness!” said young Miss Giraffe. “His neck’s so snubbed and small!”
“And how on Earth ..." the mice replied “do monsters GET so tall?”
“His ears are just so tiny” said astounded Dr. Hare.
“His claws are hardly sharp at all!” chimed in Professor Bear.

They came, each beast and bird for miles, each snail and snake and hawk
Paid dimes (five cents for children) for the right to come and gawk
And they watched the human carefully until, I’m sad to say
The human in their circus simply disappeared one day.

“It’s a shame” said Sheriff Cobra. “He was quite the sight to see!”
“And for just ten cents a visit!” Mrs. Porcupine agreed.
And she bagged the Cobra’s groceries, and they both let out a sigh.
For they knew that in the wild a circus-man would surely die.

He was found just two weeks later, having wandered out of town
Underneath the bridge to Birdville, decomposing on the ground
“Such a shame,” Police Raccoon lamented once called in.
“I’ll have to tell the owner that we couldn’t save the skin.”

All the creatures came to see a funeral for the man
Who’d made the circus so much fun, then broke his chains and ran.
The strange machine he came in, made a statue, marked the place
Where “Astronaut James Darson” occupies his final space.
Previous More Front Page News Next