Occasionally someone steps forward with a horrifying account of abuse at the hands of a company's customer service department. While the actions described can seem almost impossibly cruel and absent of any conceivable motivation, they must be taken at face value. It is, after all, hard to believe that anyone would embellish a story to make a company look bad, or to gloss over the narrator's own actions. This is the most shocking tale of customer abuse that we have ever come across.

My laptop broke the very day I purchased it because Apple is a bad company. The body simply fell apart in two pieces for absolutely no reason. My home business (creating anvils and storing them in wobbly stacks right next to my computer desk) requires a computer, and I thought Apple made good ones but I guess I was wrong. Anyway, without a computer I was losing money and this was simply unacceptable.

I brought my laptop into the local Apple Store, which was staffed by a bunch of sneering hipsters. The one girl that was working that day was sort of acceptably pretty, but she looked like a total bitch and I'm a good person so I didn't bother asking her out.

My hands were in the air and I had adopted a non-threatening body posture. Before I could even get a word out, one of the employees grabbed me by the neck from behind and slammed me into a wall. He started screaming at me. I felt very uncomfortable but remained calm and intelligent.

"What the fuck do you want?!?" He followed his question with a slap to the back of my head. 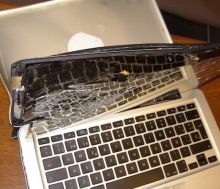 One of his cohorts laughed while menacingly chewing a toothpick. He took out what appeared to be a switchblade and flicked it open, revealing the device to be a comb. After spitting at my feet he began to run the comb through his slicked back greasy hair.

"Please," I reasoned in a submissive tone of voice, "all I want is to have my laptop fixed or replaced. I don't want any trouble."

The first employee roughly snatched the device from my hand. Then he inspected the computer, tilting it at random angles and scratching his head as though he could not fully understand what he was looking at. He appeared to be very stupid, but I did not point this out or let it show in my expression.

After a few moments he violently threw the laptop on the ground, then stomped on it.

"This is our company policy," he explained with a sinister laugh. "We never fix anything or help anyone. Standard procedure is to humiliate people and break their things until they leave us alone. I am stomping on your laptop."

Although I could hardly believe what he was saying, the "genius" (I use that term in quotes because I do not believe Apple employees to be geniuses) produced a confidential document that clearly laid out the policy he had just outlined. It detailed the stomping, the breaking, and the intimidation. There was a signature from Steve Jobs on the bottom, and a motivational quote that read "Our business will only grow if we treat every customer very badly."

The employee told me these policies were a secret and that I would never be able to prove it to anyone or win a court case. I was shocked.

I politely thanked him for his time, and the brute responded by having me escorted from the store for absolutely no reason by two enormous security goons armed with bazookas. I didn't resist at all, but once they deposited me to the ground they shot me in the leg with their bazookas for good measure. Unfortunately I am a very fast healer so there is no longer a scar, and I didn't think to take a picture immediately after the incident.

Three hours later a police car came by the Apple Store parking lot to hassle me. They said that the president of the company phoned in to let them know that I had made a bomb threat. This was absolutely ridiculous. I had never mentioned a bomb at all. Of course, when the police opened my trunk and discovered the bomb that I always keep nearby for personal protection, they ignored common sense and sided with the hipster conglomerate.

They let me off with a warning, but only after holding me still while the Apple employees took turns carving necromantic symbols into my flesh (again, they healed before I could think to take a picture). In turn, I'd like to let you off with a warning: Do not deal with Apple.