Coming Up on the Next Modern Marvels 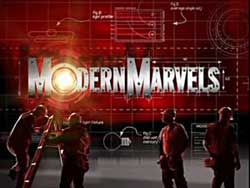 It gives me great pain to announce that I, Hassan "Acetone" Mikal, will be leaving you next month. It has been a pleasure writing for Something Awful for the past 14 years. Posting an article on this web site every other Thursday has really made me feel like I was a part of a wonderful family. I will always remember the one other front page guy I talked to and the countless others that felt it in their hearts to not bother me with their problems. For that I thank you. I also want to thank all of the readers who helped me get this far by calling me a faggot and the rest of you who saw my name above an article and decided to just continue along to the forums. You guys are the best.

The reason I'm leaving is not a crippling addiction to alcohol or an injured kneecap. No, it's not that exciting. The real reason is, I got a new job! Finally, my vocational certificate in microwave repair has paid off. Starting next month I will become the new executive producer of The History Channel's Modern Marvels. It's a dream come true for me, as I've always sat on a foldout bed at 2 in the morning too depressed to sleep watching Modern Marvels and wishing that I've done anything worthwhile in my entire life, with the next day looming over my head like a dark spectre of death as I wonder what horrors it will bring.

The past few seasons have seen their share of critics. Many longtime viewers have suggested that the show is simply running out of ideas. I mean, how many Hoover Dams or Akashi-Kaikyo Bridges are there? Personally I disagree. I've always wondered how they get cereal into those boxes. Cheerios is truly a modern marvel indeed. But The History Channel took some notes from these loyal viewers and hired me to revitalize the series. As a special treat for all six of my loyal readers I'm giving you a special preview of just some of the episodes that will be airing during the 13th season. The rest of you, enjoy your visit to the forums!

The Hoover Dam Revisited
Airs Sunday January 7 at 2:00AM

We've covered the tumultuous history and construction of one of the seven engineering wonders of the world before, but you've never seen it like this! Hoover Dam, once the largest concrete dam in the United States, is still hardening to this day and gaining strength as it cures in order to one day destroy the human race. Only the History Channel can bring you the hardening concrete footage you loser history weirdoes crave!

In the season premiere of Modern Marvels your jaw will drop as the Hoover Dam continues to harden right before your eyes! We'll talk to Robert Walsh from the U.S. Bureau of Reclamation who will tell you, "Yes, that's what it's doing." You'll learn the secret of concrete compression and how you can use it to crush your enemies. When will the Hoover Dam ever be satisfied with its hardness? No one knows, or we haven't bothered to find out. Join us as we revisit the Hoover Dam during Concrete Week, only on The History Channel!

A Gigantic Ball of Twine
Airs Wednesday January 18 at 10:00PM

A one-time frontpage updater for Something Awful, A Gigantic Ball of Twine has gone on to be the most successful person to ever write for SA. He is the largest ball of twine, at least in Cawker City, Kansas, but he's definitely the most lovable. Eleven men died during the construction of the ball made with enough twine to circle the globe 0.05 times. We'll talk to farmer Frank Stroeber about the sacrifices made to create one of the seven roadside wonders, at least in Cawker City, Kansas.

How does a shopping cart get from the assembly line to the grocery store and then tipped over on its side in front of your house? Find out as Modern Marvels takes you into the fascinating world of homeless technology. Learn how a blanket is tied to a stick to create a bindle. Find out how signs are used to maximize panhandling profits. We'll take a look at how a broken down station wagon is turned into home sweet home. How do bums use logistic algorithms to find the busiest freeway exits to beg for money on? We've got the answers and you've got all the time in the world. Seriously, since you've got nothing to wake up for in the morning sit back and enjoy this episode of Modern Marvels. Enjoy it while it lasts because you'll probably be joining these guys soon.

Birds. What are birds? Urban legend suggests that these engineering wonders evolved from walking reptiles. We'll talk to one bird historian who will tell us what birds would think if humans flew around and pooped on their heads. Also we'll ask another bird historian the question you've been dying to know, what the fuck is up with a duck? Finally, we'll talk to another bird historian who refused to appear on our program. The tables have been turned in the war between birds and bees and The History Channel holds all the cards.

It was designed to be the most popular web site that makes the least amount of money on the Internet. Learn how web mogul Richard Kyanka has turned a hobby into a media empire that would cause him to lose money if it weren't for a couple forums ready and willing to buy new cartoon avatars every week. Find out how 3 million page views can earn you tens of dollars with Google AdSense and make you a hundredaire.

Want to lose almost 50% of the cash you bring in to taxes and merchant fees for shit you sell to people on the Internet? Mr. Kyanka will show you how you too can get into the lucrative business of running a web site that doesn't bombard its users with ads that fly into the center of the page and dance around in the hopes that you accidentally click on them. In this episode of Modern Marvels, you'll learn just how expensive sticking to your principles can be!

The challenge: create a pen that is sturdy enough to mark with precision but also soft enough to write on the most private flesh of a woman. How? The Sharpie. The Sharpie has placed enough ink on women's breasts to fill Lake Superior three times. Learn how ink was introduced to felt tip and changed the course of a nation. Introduced in 1964, the Sharpie has gone on to become a popular inhalant for first-timers ever since 7th graders realized it could get them high. Sharpie party at my house, ya'll!

They lined up on the beaches of Galveston, Texas to see a sand castle competition. What they saw that day however, would change their lives. See what sandcastle engineers learned from one of the deadliest sandcastle disasters in history. Other disasters profiled include the bully rampage of Amity Island beach that destroyed six world class sandcastles, the U.S. Open Sandcastle Competition collapse of 1988 and the collapse at Crystal Cove Beach that trapped six miners. Viewer discretion is advised.

We've profiled the technology of one the most ruthless dictators the modern world has ever seen, Adolph Hitler. Now take a look at the technology of one of the oldest, Fidel Castro. In never before seen footage we chronicle the life support machines that keep both Castro and a nation alive and well. Nanomachines equipped with powerful artificial intelligence routines are injected into Castro's bloodstream and go to work, repairing his rotting organs from the inside. Castro is and always has been a man of the people even though forty percent of his body is now robotic. Half-man half-machine, Castro will live on forever, and The History Channel gives you a front row seat.

Scientists predict that it could one day solve world hunger. Fifty years ago it was used as an industrial solvent. Today it makes your belly button smell funny. In the meantime, belly button lint remains largely a mystery. We'll show you its current uses, future applications, and lasting legacy.

Historians debate whether he got up or went outside. How any man could amass such an incredible pile of garbage is nothing less than an engineering miracle. On the season finale of Modern Marvels, we uncover the life of the computer addict that built the largest nerd pile the world has ever seen. We look at the pile from conception to construction to realization. We show you the load bearing McDonald's fry boxes and the foundation poured out of melted Snickers bars that are still hardening and becoming stronger to this day. It's the only episode big enough to end a season of Modern Marvels. (If anyone actually has this image please send me a link to it because I'm too stupid to find it on my own!)

And now I must bid you farewell friends, and I hope you enjoy the next season of Modern Marvels. See you at tha crossroadz...