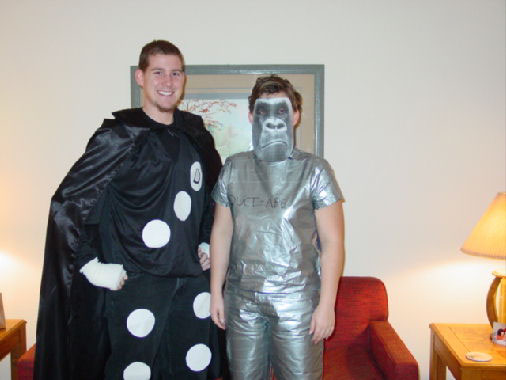 Order, order please! The Supervillain Town Hall Meeting for the month of November is now officially underway. Let the record show that all members are in attendance with the exception of Casually Late Man... no wait, here he comes. Strike that from the record please.

Before we get started, on a personal note I'd like to thank you for appointing me as the master of ceremonies following Stealy Dan's sentence of life in prison for his bungled attempt to rob Fort Knox. Wearing that heavy winter jacket was a great idea in theory, but the building ultimately proved to be too large for even those extra large pockets. I'm sure I speak for all of us when I hope that Stealy Dan is released on good behavior when his parole comes up next month.

For the first order of business, I'd like to bring up a looming threat to our very existence which we've avoided discussing for far too long. No, Owl Cadet, I'm not talking about this building's Hostess Fruit Pie vending machine. Of course I know it hasn't been restocked since August. How could I possibly ignore the headlines you guys have been making with that nationwide series of foiled attempts to rob delicious pies from culturally diverse children? That's a matter you'll have to take up with the maintenance crew, but I'm glad you brought it up since our collective inability to pull off even the smallest of crimes is directly related to what I was about to bring up.

We outnumber the superheroes by a wide margin. Think about it, every hero has a rotation of at least eight villains which he finds himself pitted against on a regular basis, and that's not even counting the small timers who aren't officially recognized by this organization. You'd think at least one of us would have gotten away with at least a minor crime like jaykwalking or copyright infringement by now, but no. Zero percent success rate. So why have we been failing for so long now?

We've grown so accustomed to losing that subconsciously we've already lost before we even begin planning the first steps of our schemes. Instead of committing straightforward crimes that we'd stand a chance of pulling off, we shoot ourselves in the foot with overly intricate gameplans and poor personnel choices. If we only put some effort into things we'd be unstoppable! See, the Nodding Menace knows what I'm talking about.

What do I mean about poor personnel choices? Take you for example, Attica.Your superpower is that you always get caught. Imagine that! Some guys get heat vision, some guys can fly, some are nearly invincible. You? You get caught. You were dealt a bad hand in life, but you persevered and made a name for yourself in the underworld and I respect that. Teaming up with The Human Doormat though... it hasn't worked out as well as you'd hoped, has it? I know you guys have been friends forever, but his superpower is losing every fight he's involved in. Again, I respect what you've been able to accomplish, but don't you see the folly of this matchup?

I'm not suggesting that you split up, but have you ever considered bringing a new guy into the fold? I suggest Opposite Day over there. His uncanny ability to make everything around him act conversely to the way you'd expect would make you guys unstoppable!

I know you've already got a partner, Opposite Day, and I hate to be the one to say this, but I think it would be for the best if you and the Unbeatable Winner parted ways. No one's saying you can't still be friends when you're off the clock, but it actually would be a good idea if you stayed as far away from each other as possible for the rest of your lives.

So does everyone see how adding or removing just one person can affect your chances of being a successful villain? Good! Does anyone object to a team restructuring meeting in the parking lot after we're finished here? What's your objection, Nodding Menace? You don't have any objections? Then why... just nevermind.

Our second order of business is just as much a threat to our existence as the first topic. Whoever keeps setting those fires in our storage room for highly flammable objects, dynamite and airborne viruses needs to stop. Seriously. I realize a number of you are arsonists or have skin made of lava/flames, but there's already a fireproof rest room that was specifically made for you guys. If there's a line for the fireproof room, just hold the urge in and wait your turn. Or heck, set fire to pretty much any room that isn't the most dangerous storage area in the building, okay?

Now for our third order of business, I'd like to... oh wow. That's just weird! I never noticed it until I stood up here at the podium and looked right at you, Captain Not A Spy, but you look just like Captain Justice! I mean it! You have the same facial structure, physique, costume, everything. If it weren't for the fake mustache you're wearing you'd be his twin brother.

Why do you look so taken aback? Sure we all hate Captain Justice, the guy locked us all up at one time or another and knocked like seven of us into vats of acid/radioactive waste. But he's a good looking guy. It's a compliment.

Everyone turn around and look at Captain Not A Spy! You've got to see this!

Wow, your costume isn't just similar, it's exactly the same! You've even got "CJ" on your chest in really big letters just like Captain Justice. We could probably use this to our advantage, like if we had you take off your mustache and spy on the superheroes by posing as Captain Justice. The genius of it is they'd never expect it, since your freaking name is Captain Not A Spy.

Hey, where are you running? Come back, it's just a fake mustache! It's not like you'd have to shave it off, you could put it back on when you're done!

Jeez, what was up with that guy?