More animated talking animals coming at you this week in the form of Rio: Ian "ProfessorClumsy" Maddison heroically stepped in to save Joseph "Jay Dub" Wade's sanity. Meanwhile, Martin R. "Vargo" Schneider thought he'd have a blast with Your Highness and turned out to be incredibly wrong. Finally, Jay Dub decided he'd play it safe and watch two non-animated, only-the-humans-talk films named for their title characters, Hanna and Arthur.

EXPECTATIONS: Every time I visit the cinema these days I am forced to sit through a terrible advert for Orange mobile phones, courtesy of the animated cast of Rio. I have never once heard anybody of any age laugh at this thing, which hardly fills me with optimism. However, with Jay Dub left a gibbering wreck after last week's Hop, I felt the only humane thing to do was to step up myself and endure what can only be an arduous ninety-six minutes.

REALITY: "Has Pixar made a movie about talking birds yet? No? Okay, let's do that before they do. You guys, start drawing birds. You, start rounding up as many celebrity voices as we can get. You, get me a coffee!"

"And should I start working on a script?"

"A what? I don't have time for that now, I have concept art to approve... What the hell is this? I said big eyes, damn it! Big eyes! Humongous eyes! If I don't fill sixty percent of every shot with eyes, the kids won't buy it! Eyes! Dancing birds! Celebrity voices! This is how movies are made!" 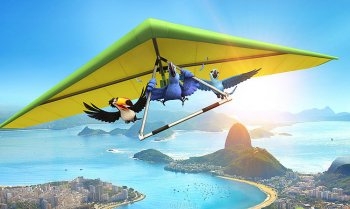 Hilarious animated hijinks! No wait... not hilarious. The other thing. Tedious.The above scene is how I imagine Rio was first conceived, and I would not be at all surprised if I later discovered this to be true. The characters are poorly designed and mostly feel shoe-horned into the story, what little of it there is. Our hero Blu (Jesse Eisenberg) is a blue macaw brought from Rio do Janeiro to Minnesota by smugglers; there he is found and nurtured by Linda (Leslie Mann). One day, Blu's domesticated world is turned upside down when wildlife conservationist Tulio (Rodrigo Santoro) appears and reveals to Linda that Blu is the last male blue macaw in the world and that he needs to return to Rio to mate with the last female, Jewel (Anne Hathaway). Along the way he is helped by an interchangeable cast of characters voiced by will.i.am, Jamie Foxx and Tracy Morgan, and hindered by the incredibly evil Nigel (Jemaine Clement).

Everything trundles along at such a poorly executed pace that things like character motivations get cast aside in favour of endless party scenes. You know how we're always complaining that animated films keep ending with a dance party? That dance party is the entirety of Rio. It doesn't let up for one second to give you time to ponder why the hell the villains in this movie care so much about their particular goal of kidnapping two birds. Presumably they're worth a lot of money, but there has to be a point where you write off your losses. This is exactly why the protagonists in The Karate Kid made no logical or emotional sense. You'd think they could have portrayed something pretty simplistic in a talking-bird film, instead of what they tried to do.

You see, the real villains in this film are three young men who live in a slum and are presumably forced into a life of crime. Why that necessarily involves the smuggling of rare birds is beyond me, especially when they all seem to answer to a damn bird themselves. It's really coming to something when a bird can force you into a life of oddly specific criminal activity for absolutely no reason. But, consider the implications of that. One character in this film is a young orphan who sleeps in a box on a metal roof. We're shown his tragic predicament early on and it looms forever over the rest of the film. Later, he appeals to Linda and Tulio because he wants to do the right thing. Tulio claims he cannot be trusted because he is obviously a little rat slum orphan scumbag, and Tulio knows the dangers of Brazil. Then Linda decides they have to trust him, because she is a wise, enlightened, white American who can reach out with kind arms and an accepting soul; the poor need the rich to grant them redemption, after all.

All those massive eyes all focused on something just off screen to the left there.

It is impossible to dislike the antagonists because the film has such a high and mighty stance over them, and it's also impossible to like the protagonists because they're constantly fluctuating between whining about nothing and partying at the slightest provocation. It's like watching a bunch of college students lord it over a group of less fortunate youths because they assume they must be evil and lazy in order to be poor. It's almost Randian, which is appropriate given what we're anticipating next week.

Is that Rio's biggest crime, or should we be more offended by the fact that this film is simply not in any way funny? There were plenty of kids and other people in the crowd with me, and I can't remember the last time I heard such a morbidly silent audience. If the makers of Rio were less interested in filling the screen with gigantic eyeballs and spent more time working on a script for their celebrity actors to read between real jobs, this could have at least been mildly amusing. The cast members don't even bring much to their roles, apart from the occassional rap session.

Jesse Eisenberg, in particular, is not cut out for voice-over work. After his Academy Award-nominated performance in The Social Network, it is clear that his naturally fast and understated speech pattern does not lend itself well to animated birds. Not that the design work helps at all; some of the characters in this film are even identical, not just in appearance, but in personality. There are only so many times you can show kids a big fat guy with a flat nose who also loves to dance before they start getting them confused.

I really can't imagine anyone warming to this crap when we have Rango still delighting audiences as a hugely superior alternative. Maybe it's about time these animation studios started to realise that it's not all about filling the screen with 3-D eyes; unique character design and heartfelt storytelling actually do resonate with young people.

MINORITY REPORT: I wanted bigger eyes, but the damn artists just couldn't pull it off. They're all fired now, damn them! Where's my damn coffee? I want coffee with huge eyes! - Blue Sky Studio Exec