Come in, Christopher. Take a seat.

I trust your family is doing well? Oh my. An industrial combine, right in the living room? I'm sorry to hear that they only came in second, but that's still quite an accomplishment. If you ask me, the nuclear scientist should never have been allowed in, regardless of how impressive an atom bomb in a Coke bottle may be. Completely goes against the spirit of the contest.

I'm sure you're wondering why we're making small talk in my office, so let's get to it. You're an observant guy, Chris. You know this economic situation has hit the company hard. Some changes simply have to be made around here. No one's losing their job, but there will be a number of cutbacks that will impact your workday.

First, energy. You wouldn't believe how much it costs to keep a single IBM from 1985 running a 2-frames-per-second screen saver for a full year in some forgotten corner, much less an entire company. Our consultant from State Og Business Solutions came up with a solution that will cut our energy costs by one hundred percent, maybe more. 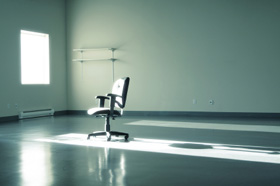 Step one is to remove ourselves from the grid entirely. No outside energy source, no power line which a crafty rival could follow to discover our office's location. As you can tell by the darkness, we completed this first step ahead of schedule.

Step two is to install devices in our office chairs that generate a small amount of electricity every time the seat makes a full rotation. We're going to need everyone to spin all day. No exceptions, no lollygagging.

Yes, you're exactly right. We considered teaching everyone how to type by tapping one key as they pass by with each revolution, but once you factor in missed keystrokes, productivity would be nowhere near acceptable. That's why we're getting rid of the computers.

Well, all of them save for one on each floor, which will be equipeed with voice recognition software. If you want your documents to be error-free, you'd better learn how to yell louder than everyone else that's trying to use it the computer, and for God's sakes never pause or perhaps some of their words will appear between yours.

Let's see, what else have I got written down here? Ah, here we are. The tours.

Tell me, Christopher, have you ever been to Disney World? They used to have this fantastic attraction where you could watch in amazement as animatronic versions of Abe Lincoln and George Washington told you all about light bulbs for half an hour. That really stuck with me through the years - partially because I got my first handy during the show from some Brazilian girl with a lazy eye who was with a whole tour group of like ninety people all wearing orange shirts, but mostly because it made me reconsider everything I thought I knew about historical figures as they relate to mechanical puppetry.

My idea is to reproduce that magic right here in our office. After paying a nominal fee, visitors will take a tour through history with yourself and your coworkers as their guides. Everyone will come in to work in costume as a historical figure and go about their business, then recite a bit of dialogue when a tour approaches their cubicle.

You'll be playing the part of Stevie Ray Vaughn. Take this notecard and memorize it. That way if you lose it, you'll be able to identify it in a pile of other notecards. Then try to memorize the words that are written on the notecard.

Don't look so stunned. It's only eight lines, and if you take a closer look you'll notice they're all the same. If you need any help pronouncing some of the words, let me know. Some people get tongue-tied with "Xenu" and "thetans" for some reason.

The third change, well, it will be difficult. We're going to have to request that all employees return their company cars to the Rolls Royce dealership. We've also decided that the company Faberge eggs are something we really can't afford at this point. Everyone will be asked to return half of their egg by Friday.

You might have noticed the custodial department out in full force today, removing all non-essential workplace materials to further reduce our costs. They've started with the smaller stuff like family photos and carpeting, but by the time you come in tomorrow morning every door and window in the building will be gone, replaced with much cheaper and smaller doors and windows.

I think that just about does it... oh! No, sorry. There is one last thing.

We can no longer afford to feed your Australians, much less keep the Australian Daycare Center going. I'm sorry, Christopher. I really am. No matter how I crunched the numbers, there was just no way around it.