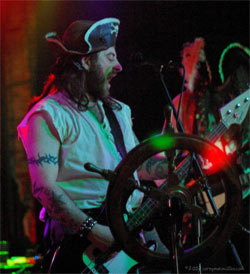 Tony is a good rapper, but now he plays guitar and writes lyrics for us since we stopped pirate raps.Ahoy there! As many of you know, I work in the renaissance faire during the summer. What you may not know is that me and a few of the guys from the renfaire have been spending our weekends practicing various pirate shanties. Doug came up with the idea during last year's talk like a pirate day.

Doug was already in a ninja-themed 8-bit rap group called Ninjatendo and he suggested the idea. We always used to get pretty bawdy with our shanties at ye olde renfaire and it was a natural idea since we all love pirates. Most of us had costumes from Halloween or just for fun or whatever, so we suited up and tried out some raps.

Tony was our lead singer for a while because he is really good with lyrics, but eventually we decided it wasn't quite working out. There were already like three pirate rap groups, so then we decided to form a rock band that's pirate-themed. That's how Avast, Me Hearties was born.

I don't know if you know this, but some of the best rock bands have had pirate themes. Rush was originally pirate themed. David Bowie went through a pirate theme phase in the late 1970s. Even Journey had that Japanese LP version of Escape that was all about cheating Davy Jones and fighting and drinking grog.

The only problem was Tony was a really good rapper and all, but he couldn't sing, so I donned the cap'n's hat and I became Cap'n Lonnie. Tony still writes all our lyrics and he does a great job.

Well, you know what? I am proud to announce that we have just got done playing some gigs with Ninjatendo and a furry Metallica cover band called Furstice for All. I don't know about the whole furry thing, but they rock pretty hard so you can't knock them.

We were all a big hit!

We played our gigs at a place called Pizzeria Uno. I don't know if you've heard of it, but it's by the Applebees at the mall and Doug works there as a waiter and they said on Sundays and Mondays we can play music in the bar area. It's pretty awesome.

They have all this cool stuff on the wall and these ducts and stuff on the ceiling. And the pizza is amazing. I highly recommend the pizza skins. Mashed potatoes and cheddar cheese on a pizza crust? AND bacon? Yes, please! 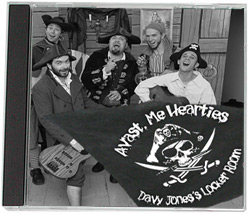 Our album is getting some pretty good reviews from the pirate music websites.Vince who plays the lute a little bit is our big attraction. He dresses up as Captain Jack Sparrow (even though he is only a matey because there can only be one captain) and he is a big hit with the moms who come to Uno.

He works part time at an Autozone and the other part of his time he works at a minigolf place and pizza place where kids do birthdays. I think we might get some gigs there eventually. Vince is constantly taking pictures with women and kids and stuff though and he gets numbers and even hooks up with them.

I mean, I guess he hooks up. He said he goes to their houses for birthday parties, but Vince is a serious wench hound. He has dated like three different wenches since I've known him.

Oh, blargh! I guess I should mention the album.

About three months ago we burned our first disc. It's called Davey Jones's Locker Room and it's sort of a play on the idea of Davy Jones's Locker. It's a concept album. You know, like O.K. Computer?

It's about our pirate ship is being chased by another pirate ship and that ship has ghosts on it and they want to play us in football. In the end we have a big football match with them on the Island of Lost Monkeys. Lots of monkey-themed songs on there as well. They work pretty well with the pirate theme and I am a huuuuuge Monkey Island fanatic.

We also have a song about foods from the 80s that we miss like Ninja Turtle Hostess pies and Ecto Cooler and Mario cereal. Doug suggested that and it was kinda hard to work in the pirate theme, but it's a huge crowd pleaser. Second only to our shanty about robot pirates. 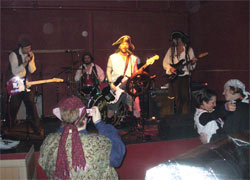 This was from our show Live at Bootycon which is a Missouri area pirate themed convention. Third biggest in the midwest!Also I...I don't know what I'm doing. I don't know anymore. I'm a cook at Bob Evans, I'm 36 years old, and I have 2,000 pirate rock CDs in a box in my car. Most of the other guys in the band are married and don't have time to hang out with me aside from the gigs. Our groupies look like biscuit dough exploding from the seams of one of those tubes. The girls are all jammed into corsets and wearing eye-patches. I like depth perception, ladies!

Think about that for a minute. My sex life for the last year has consisted of signing the cleavage of girls that smell like hot wings. If I'm lucky I can see their bra while I'm doing it, this also happens when I am not lucky.

I had my own apartment up until last month when Bob Evans cut my hours and then that same week my landlord raised rent. I was going to sleep on Doug's couch for a while, but it just made sense to move back in with my mom. I think she needs someone around...but, you know, it's hard to bring one of the groupies home and hook up with her when there is one of my mom's cats staring at us.

I don't know all the names but there is one cat that gets up on this shelf in the spare room whenever I start making out with a girl and it just meows and waves its paw in the air like it's reaching out for something.

I've learned to tune the bastard out, but fat girls can't ignore that shit. It's like the cat is saying their name over and over.

But I'm sorry to bore you with my problems.

Want to buy a pirate rock CD, ye landlubber? Just go to yon Bob Evans any Sunday morn and ask the wench who greets ye for Cap'n Lonnie or Lonald. Unless Nancy is the hostess because she is a real c-word. Just ask anyone else behind the counter and they'll let you into the back area. I have the CDs with me in my car. They're $8.99 or two for $12. Not CD-Rs either, we paid a ton to get real CDs and liner notes made.