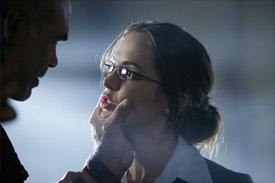 Are we talking first, second, or third-wave feminism?I've been thinking a lot about feminism lately. Must be all the estrogen in the drinking water.

Whenever I start thinking like that my mind naturally ends up thinking about Joss Whedon. He's the self-described feminist behind shows like Buffy: The Vampire Slayer and Firefly.

His most recent effort, Dollhouse (Fox, Fridays at 9/8c), is about a very unusual escort service. Wealthy clients customize their dream dates to order. The Dollhouse programs personalities and skills into one of their "Actives" and sends them off on a fantasy date that never goes according to plan.

Eliza Dushku stars at the high-tech hooker Echo, mind-wiped for the pleasure of dudes around the globe. There are some other people on the show, like that black guy who looks sort of familiar and that guy from Battlestar Galactica who had a baby with a Cylon. No, the other guy.

Dollhouse is only three episodes into the first season, but I am sure there will be a second season and I think I am ready to offer my services as a writer for the series. Mr. Whedon, you don't have to take my word for that, here's a sample from a script I've been working on:

ECHO has arrived after her first brain wiping. She is greeted by TOPHER and BRITISH LADY.

Here are some special panties and a belly shirt you can wear when you're inside the Dollhouse.

Over there are some of your fellow hookers (points to hookers doing Tai-Chi) and if you want to relax there are some couches in a pit over there and we have this dentist chair over here that shoots radiation into your brain.

She's already tried that out.

You wouldn't REMEMBER he he he.

They walk down a hallway and you can see Echo's butthalves moving around in her pants that are really tight. Echo stops at a frosted glass door. You can only see silhouettes inside and one of them looks like a totally badass dude.

He's our most mysterious hooker.