My Future's So Dark, I Gotta Wear Spikes

Back in 198X, our shared history totally split into two timelines when, through a series of unlikely events that can be traced back to a power surge as a young man saved his Dungeons & Dragons character data on an Apple IIe, the entire score from John Carpenter's The Thing became the U.S. national anthem.

Soon the opening ceremonies of sporting events across our once-great nation became drawn out and unsettling. Within a month the world's superpowers were destabilized. Resources were depleted, nuclear fallout ravaged the landscape, and holographic advertisements crowded the major cities, looping their crass and dehumanizing pitches for an audience of soot-faced victims of the unjust and depraved. Our clothes' shoulderpads grew ever larger, a defensive measure spurred by the increasingly harsh environment we found ourselves in. 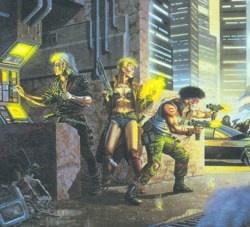 For instance, our flying cars are dusty as hell. Cleaning them is no use. Any surface that you wipe clean will immediately take on a layer of yellow-brown plaque from the permasmog. If you dared to fly above the mess, you'd probably get taken out by one of the 80-foot plumes of flame that shoot from the tops of the skyscrapers.

Besides, even if you could avoid a gnarly mid-air flamebroiling, it's best to keep commutes as short as possible. Remember the resource shortages I mentioned? Well, liquid plutonium is up to almost $3 a gallon.

It's always night. The pollution is to blame for that one too, but no one's in a hurry to fix it since the glow-in-the-dark tubes woven into our hair and clothing really stand out. The only place where it's daytime is in the desert, but I wouldn't go out there. Not for a million floppy bucks. Everyone's wearing leather and screaming and riding around in old landcars with chainsaws and T-Rex skulls welded to them. I'd rather stick to the city. All that yelling would give me a headache in no time.

Oh man, then there are the cops. Every police officer is decked out in full riot gear and shoulder-mounted stun cannons, even the bicycle cops. They ticket pretty much everyone they come across, and push everyone else. They tend to say stuff like:

"Are you talking back to me?" (said to someone that's been silent)

"This is official police business. Move along or I'll shoot." (said after breaking your legs)

"Who you gonna call? The cops? Haw haw haw!" (said with a bit of chili on the corner of his mouth)

Worse than them, though, are the gangs that the cops are too scared to do anything about. They mostly hang out at the city's biggest establishments like the video game arcade and the chain link fence storage yard, sharpening the spikes on their kneepads and peddling holodrugs.

Once they took a reporter hostage and broadcast a video of them punching the dude in the head so hard that he got knocked out. Bet you've never seen anything that brutal in your timeline. Things are mondo-bad here.

There used to be lots of sports, but now there is only Ball. Teams like the Winnipeg Crushers and the Neo York Vivisectors hit each other at high speeds. Sometimes people even break bones! Whole networks are devoted to Ball, 24-hour channels that have the ability to go in-depth but instead air the same half hour of poorly reported fluff and prescripted debate all day long.

Actually, I just realized the news channels do the same thing. Damn.

The worst part of my timeline is the art. When I was much younger my father would take me to galleries to see the works of artists like Van Gogh and Picasso, visionaries with talent to match the ideas they wanted to convey. Now, the only time you hear about art is when someone tries to make a statement by taping a newspaper clipping of Life President Hopmo to a canvas splattered with synthblood.

It's not that things like that shouldn't exist, it's just a shame that they are all art has been reduced to. Since 198X, I can't think of a single artist that has become famous for filling a gallery with art that is just as engaging to look at is it is to think about.

Be glad, alternate timeline self. Be glad that you don't have to live through the horrors of this dark future.