The History of Neon Purple 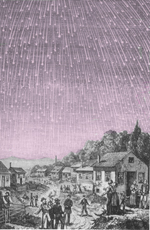 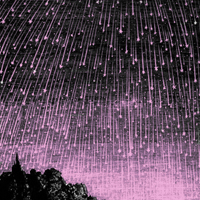 Four years after Dr. Busenitz revealed that gelatinized human muscle creates the color electric blue, another neon color was discovered in Prussia. Early one morning, the residents of the tiny hamlet of Aachenburg were awoken by an intense meteor shower that would later be described by survivors as "Lila Feuer" (translated Purple Fire.) Purple meteors the size of cattle crashed through houses, and in less than an hour, the town was destroyed. News of the destruction and colorful meteors spread quickly throughout the country with rumors of nude, horny alien babes. Relief teams, treasure seekers, and virgins flocked to the site in enormous numbers. When the horde of travelers arrived the following night, they were surprised when the ruins, glowing from radiation, were visible from over a mile away. Little could be done for the few survivors, and the virgins were disappointed, but the treasure hunters managed to collect large amounts of the meteors. These fragments were called Purple Rock and sold as mementos and novelty nightlights, a common birthday present. Soon pieces were found in the majority of all Prussian households.

Within ten years, the majority of the first generation of collectors, sellers, and many of the children who received the rocks had grown sick and died. With no understanding of radiation, the Church deemed the meteors satanic, and guided the monarchy to collect and destroy all fragments. The pieces were ignited in front of the cathedral, and quickly melted and pooled. Amazed by the beautiful liquid, the church rethought their position. The glowing liquid was collected and tested first upon serfs, then on cattle. Once found to be safe, melted Purple Rock was deemed a luxury, thus sending a second generation of scavengers to their death in the Aachenburg wasteland. 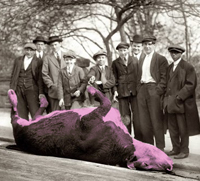 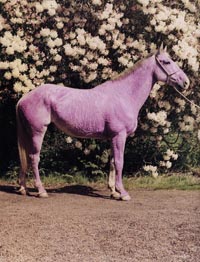 As the pigment's popularity grew, Purple Rock scavengers were forced to mine deeper and deeper into the highly radioactive ruins. Mutation and death was common, causing the price to skyrocket. Much like Electric Blue, the new color was popular with royalty. Kaiser Wilhelm II had his cavalry painted in the pigment every year for his birthday, U.S. President Benjamin Harrison's body was embalmed with Purple Rock, and Queen Victoria is fabled to have performed a Purple Rock enema once a month. Dr. Busenitz attempted to replicate his success with the new pigment, hoping to create a way for the common people to enjoy the color. The results were ultimately unsuccessful.

Due to a global misuse of the mined meteor fragments, mass production of Purple Rock ceased in 1952 due to lack of material. The last known piece of Purple Rock, a car sized fragment named "Fairy Shit" by the alcoholic merchant who found it, "Big Purp" by everyone else, was purchased by Prince in 1984 to coincide with the release of his album Purple Rain (a reference to the devastating meteor shower.) The artist equipped a set of wheels to the stone and planned to ride it from New York City to Los Angeles. The journey received large amounts of press when Prince had to stop the trip in Chattanooga, Tennessee due to what his agent described as groin pains. Since this incident, the medical term for dangerously high radiation to the testicles is referred to as Prince Syndrome.

When asked how he managed to gather enough money to purchase Big Purp, Prince swore that he had "met a chick that cums diamonds N rubies." Skeptics pointed out that it would take a woman thirty years at fourteen orgasms a day to produce enough diamonds necessary to acquire the stone. Prince had a press conference stating his sexual prowess in an attempt to clear any confusion. According to his own research, it would only take three to five years. The event allowed Prince to show his penis to thousands, but it did little to throw off the naysayers. Despite Prince's inability to shirk accusations, for unclear reasons, every critic relented or disappeared by Christmas 1985. 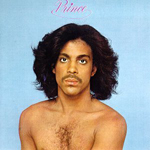 In secret, the artist was a puppet. His stage name was an acronym for the members of a secret treaty formed between Poland, Romania, Italy, North Carolina, and Estonia. The alliance was founded by the three controlled by the U.S.S.R. They believed that the production of Purple Rock would give them the capital necessary to overthrow the soviets. Italy joined for financial backing, and in return they were granted discounted Purple Rock prices once production began. North Carolina thought they were seceding.

Communication between the distant countries was complex and difficult, and any leaked information would mean harsh penalties by soviet watchdogs. The members decided to use Prince's songs to hide messages. The system worked perfectly, and vital information was passed in the open. Notable songs with hidden messages include "I Would Die 4 U" (stating the alliance), the 1989 single "Batdance" (repetitive lyric of "Get the fuck up" used as a signal to shed soviet rule), and "Raspberry Beret" (the governor of North Carolina bragging about an adulterous affair he had in a barn).

Within seven years, the U.S.S.R. was dismantled and the alliance dissolved in 1994. "Pussy Control" was recorded as a lasting reminder to the alliance members that they must "always have pussy control". Production of Purple Rock tapered off to preserve Big Purp. The remaining fragment was housed in Tallinn, the capital of Estonia, until 1997 when the CCC invaded the city and stole the stone. The purpose behind the invasion is unknown, though rumors of a secret laboratory created for the synthisis of a super neon color are common. Prince, released from his feudal serfdom enjoyed the luxury of artistic freedom for the first time. He has not had a top ten hit since.