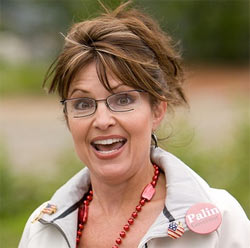 Alaska governor and former Republican VP candidate Sarah Palin resigned from office over the Fourth of July weekend. One of the many reasons she gave for stepping down was the harsh treatment of her family, particularly her Down syndrome son Trig. Something Awful immediately stepped up, assumed responsibility for our actions, and offered an apology to Sarah Palin for any mental anguish we caused her with our Photoshops and Levi Johnston articles.

I tried to convey my heartfelt remorse, but some readers misconstrued the article as an attack against Sarah Palin. I was shocked. Maybe my verbs and adjectives were a little salty. Maybe I worked in a few jokes about John McCain. I never thought it would upset people!

To my dismay, the apology spawned a new round of outraged emails. Since Something Awful supports the community and always seeks to enable it I felt it important to give the "other" side a chance to air their grievances.

Ryan R.'s email was a good example of the average message: a brief eruption of anger and the promise never to return to Something Awful.

I didn't bother replying to Ryan since he stated that he will never visit somethingawful.com again. If he does happen upon this article I would just like to say: Ryan, I sincerely apologize for anything offensive I said about Sarah Palin or her family. There is a place in God's beautiful creation for all living things, no matter how mean or retarded.

A few readers sent me cryptic emails that I had to work to decipher.

It took me a while, but I think I finally figured out what Langston was trying to say.

I give Langston (or whoever made those idiotic images) a lot of credit for going all the way to Dutch parliament to find a conservative woman slightly less white than rice. That desperate grasping shows a real commitment to trying not to look like the quilting room next to where the men-folk are having theyself a klavern.