Dog treats are food items that exist in direct contradiction with a basic law of nature: the law that dogs will eat anything dropped in front of them whether it is meant to be consumed or meant to be stared at with an "ew" facial expression. Unless specifically told otherwise, a dog assumes that the entire world is probably good for eating. So why buy things only for your dog to snack on between meals when it would be just as happy if you accidentally dropped some cereal in the morning?

I don't know, but for some reason I decided to buy a bunch of dog treats and eat them! I can't exactly claim that this was a natural progression from the above question, it was more because I thought it would be funny. But somewhere along the line, maybe when I was microwaving up a bag of dog popcorn, I started thinking about what a waste of money all these fancy treats are.

A lot of them also taste really bad. Which is why I'm going to eat them and make funny facial expressions and tell you how bad they taste. I ate ten of them, but I could only fit five in this article. The rest will come in part two. Enjoy! 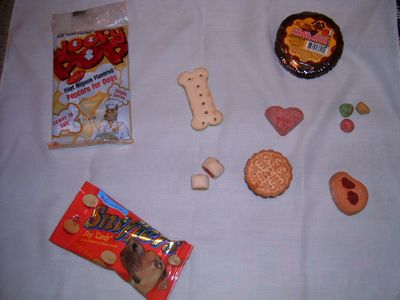 Nutritional Content: Mostly not that scary, although it does have some Chicken Byproduct in it. It's the only one I'm trying today with that ingredient and, frankly, I thought I was going to have to eat a lot more animal byproducts than this. When I was a kid I remember pet food companies used animal byproducts the way Lays uses salt or McDonalds uses animal byproducts. Those were the days&

Appearance: If someone decided to make little models of Skittles out of clay, he would probably make something very close to the Assorted Training Snacks. I like Skittles though, so maybe if I pretend really hard I can make the byproducts taste like vaguely fruit flavored sugar.

Taste: Taking a cue from how I tend to eat candy, I pop all three colors into my mouth at once, then instantly regret it. Not so much because it's a horrible taste, but because it leaves me with just so much Assorted Training Snack in my mouth that I can hardly chew the stuff. As for the actual taste, it basically tasted like I was eating play-dough, which leaves me wondering if my "little clay model of Skittles" theory was all that off. What, like dogs would know the difference?

Conclusion: If you fed your dog little clumps of dirt they'd probably like it just as much and it'd be cheaper. 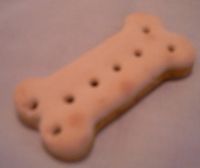 Nutritional Content: Nothing that exciting, although I'm pleased to notice peppermint oil. A mint dog biscuit? I'll take it!

Appearance: It's small, bone shaped, and filled with something that looks like the dried mustard clinging to the top of an old mustard bottle. I hope they put a ton of peppermint oil in this thing. I want it to drip when I squeeze it.

Taste: Oh god the peppermint oil failed me completely. When I first bit in, I thought it was going to be like the Assorted Training Snacks: bland but tolerable. Then a taste kicked in that I can best describe as "like biting into road kill on a hot day" or maybe "like eating a Happy Sammy dog treat". At this point I fail to see much difference between the two.

Conclusion: Sammy has no reason to be happy.

Nutritional Content: Nothing that interesting, although the package does specifically promise 14% crude protein and between 4%-7% Crude Fat. I guess that crude fat ratio is hard to pin down.

Appearance: They look like tiny sugar cookies and smell like cheap barbeque sauce. I'd settle for either, but I'm afraid the taste is going to be some unpleasant combination of the two.

Taste: By dog treat standards, this was Texas barbeque. For once the flavor promised by the package (chicken and cheese) was more or less delivered on. I wouldn't have one every day, but I wouldn't refuse it if I was starving either.

Conclusion: Buy it for your dog if you don't mind the clerk laughing at you for buying something called "Sniffers: Dog 'Candy'".

Appearance: They're heart shaped and come in several different bright colors. I guess when your main ingredient is liver you have to really compensate on looks.

Taste: Not nearly as bad as you would expect. I was preparing for one of the worst in this entire test, but really it was the same bland clay flavor as the Assorted Training Snacks. What we learn here is that it doesnt matter whether you put chicken byproduct or ground pork liver into your dog's food, just so long as you mix it liberally with the most tasteless dough you can find.

Conclusion: If Valentine's Day rolls around and you want to break up with your significant other who you, at this point, hate, just slap some frosting on the Liver Hearts and say goodbye with a plate of cookies. 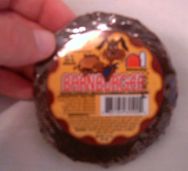 Nutritional Content: Surprisingly, it contains absolutely no beef products of any kind, although it does have poultry fat and "cheese product" which leaves me wondering just what kind of products you can get from cheese anyway. Cheese is already a dairy product, so what more can you do to it except for maybe accidentally leave it out in the sun all day? The cheese on it kind of looks like they did that, so I think I'm just going to discontinue this line of reasoning since I have to put this in my mouth in a minute.

Taste: My dog enjoys eating, among many things, dead bugs, snot covered tissues, and anything that comes out of her own body. All I can say is the Barn Burger manages to cover all of those tastes at once, so I'm sure she'd love it.

Conclusion: When the Jews were wandering for forty years in the wilderness, God fed them mana from heaven. If Satan was in charge of feeding them, he'd probably just drop a whole bunch of Barn Burgers then fly away laughing in his cherry red rocketship fueled with hate and rock music.

Look for the second part in just two short weeks!