We're heading in to the final lap of the J-List and Something Awful contest so you should probably go here, read the rules, and submit your entry. These prizes are ripe for a fit of genius that will not only win you those prizes but the acclaim and esteem of your peers. 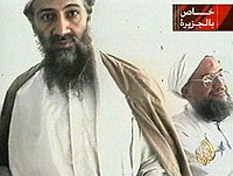 God is Great! God is Great! You know what else is great? The new Britney Spears video where she is a sexy secret agent. In roughly equal measure.It is difficult for me to conceive of something that I hate more than Al-Qaeda. I know, I know, bold stance to take, but the leadership of Al-Qaeda puts out some of the most shrill and annoying propaganda I have ever seen. Every grainy and nebulously dated video features Al-Qaeda people holding or sitting next to AK-47s and telling me why I suck. I'm sorry Dr. Phil-Qaeda, I must have missed your last sit down with Oprah where you unveiled your Allahu Ackbar tips to better living. If belligerent and ignorant demagogues of my own nominal religion send me into a rage how do you think your laundry lists of "why America drools and Islam rules" are going to win me over?

Oh, that's right, you'll win me over because now you have nuclear weapons, according to a second-hand source "very close" to the always honest and forthright Ayman al-Zawahri. Don't get me wrong, atomic bombs are scary things, but the fact of the matter is that the longer it has been since 9-11 the bigger and bigger the tall-tales of Al-Qaeda get. A year or so after 9-11 they were telling America to leave the Middle East and convert to Islam or there would be a rain of airplanes and box cutters on our cities. Then they were going to poison us with toxins and Biblical plagues. And now it's the power of the atom and al-Zawahri is all "I am become death". Maybe he am should become honest with himself first.

Al-Qaeda is no longer the fresh hotness. In fact, Al-Qaeda never was the fresh hotness. So they blew up the World Trade Center and killed three thousand people in one day. Yeah, that was shocking, mostly thanks to television news. Do you know who else killed three thousand people in one day? Just about everyone. In fact, as wars go, killing three thousand people in a single day is not exactly an epic accomplishment. During World War II the US and England firebombed Dresden and killed (according to some sources) over 200,000 people over a three day period, and we were the GOOD GUYS. Let me slow that down and run that by you again Al-Qaeda, we firebombed the refugee filled city of Dresden killing hundreds of thousands of people and history still recognizes the United States as one of the good guys.

There are two things I really look forward to in the future out of Al-Qaeda. One is the increasingly fractured list of demands Al-Qaeda thinks they can make. The other is the spoooooooky threat that inevitably accompanies a new list of demands. Since I'm a pretty helpful guy I have decided to save Al-Qaeda the trouble of coming up with their new threats and demands and have compiled their next three here on Something Awful. All they need to do is get someone who looks vaguely like Bin Laden to put on a camouflage jacket over a robe, sling an AK over his shoulder, and record them on the side of a mountain. The CIA is no good at telling people apart once they put on a turban so Bin Laden doesn't even have to take a break from collecting pop tabs for his kidney dialysis. 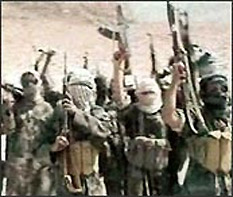 Oooh a bunch of guys yelling and shooting AK-47s in the air!! Sccccarrry! That shit happens weekly in my neighborhood only they don't shoot them in the air. Drunken Puerto Rican gang members bang harder than Al-Qaeda.The Threat: Al-Qaeda has discovered a way to travel back in time and kill great leaders of Western history.
The Demands:The Statement: "Allah is great and will shield and strengthen us from the Crusaders and their Jewish allies. We have now the technology of time and will use this to rain holy vengeance upon the enemies of Islam. Your George Washington will be a trophy on our walls and the blood of a young Jimmy Carter will stain our hands red. Eleanor Roosevelt and Beethoven can not prepare for our assault, for we will come to them in their sleep and cut out their tongues. God is great and his love for his martyrs is infinite."

New Al-Qaeda Message Two
The Threat: Al-Qaeda is in possession of the Sword of Omens, a powerful magical sword forged by the great dwarf smiths of Mol'Draguna and wielded by the warrior king Tyrandus.
The Demands:

The Statement: "We thank Almighty God, who said in his holy book: Ye who believe, take not the Jews and the Christians for your friends and protectors. The Jews, sometimes friends, but not protectors and the Christians sometimes protectors, but never friends. Like Aziq says 'you can be pleased by some of the infidels some of the time but never all of the infidels all of the time.' That is why Allah has granted us the eternal power of the Sword of Omens, which Tyrandus used to slay the Lich Knight Verdinius at the great battle of Night's Breech. No longer will America and its skeletal legions menace our oppressed peoples; no longer will the sepulchers empty into the streets of the Holy City at the whim of the dread sorcerer Bush. We are coming for your Bone Praetorians in Baghdad and no longer will your undead host feast upon the living. Allah is Great! Allah is Great! I mean it when I say that Allah is Great!"

Yeah, you're a real mastermind Bin-Bin. Wake me up when you pull off the Normandy landings, The Berlin Airlift, the super computer, antibiotics...oh, that's right, you're too busy bragging about your bombs and religion. Too bad, huh?The Threat: Al-Qaeda has constructed an invincible mechanical walker droid from thousands of AK-47 parts.
The Demands:The Statement: "Let the United States know that the Islamic nation will not remain silent after this day on bad videogame sequels and panty shots in Love Hina. You laugh at Allah's greatest technology of the AK-47, but we have combined the seemingly simple AK-47 into a masterwork of robomechanics. This Mecha of Mecca cannot be stopped by the bullets of infidels and you will once again realize the might of 60 year old Soviet assault weapons. Our faith has transformed these working stiff's weapons into huge hydraulic limbs, an armored chassis, those GPS things you Americans have, X-ray vision, and lasers. Now you will be the ones who cower in fear at the feet of our God-given technological superiority! Allah is Way Rad! Allah is Badness! Allah is Too Cool for School!"

Far be it for me to pick out one religion to disparage unfairly when I think all religions are equally idiotic. Just as we have women banned from learning in fundamentalist Islamic nations we have schools in America forced to teach "scientific creationism" along with evolution. Islam is a lot newer than Christianity; it still has the whole "crusading" thing to get out of its system. We can look down on Muslims and think of them as blood thirsty, but Christians were just as big a bunch of bloodthirsty little shits. To this day we retain a lot of the vestiges of our "warrior faith" and you will frequently hear the phrase "God Bless" in the same sentence as the phrase "our brave men and women of the Armed Forces". Even our president thinks he was chosen by God to lead this nation, a scary thought considering God is notoriously undemocratic.

Chill out, hang loose, let the laser guided chips and chip sub munitions fall where they may, and don't let Al-Qaeda's ridiculous braggadocio frighten you. Shit will blow up. Roasted, shattered, and maimed corpses will go sailing through the American skies again before all of this is over. When they do take a deep a breath, try to picture Dresden lit from within by 3,000 tons of incendiary bombs, and remember that America truly is number one. We can out-brutalize the best of these amateurs.

I Hate This Dog

Hey there folks, Taylor "Psychosis" Bell checking in with an all-new rom pit review! It's based on some old cartoon that I barely remember, and let me tell you, it simply isn't very good at all!

Unfortunately for gamers worldwide, the gameplay not only doesn’t involve races, but it also fails to be wacky in any discernable way. What we’re left with is a staggeringly dull platformer with an obnoxious hero and simplistic enemies that look like they’re made from construction paper. Throughout the entire game you control Muttley, a fat orange dog with a huge mean streak and a terminal case of the giggles, and you spend most of your time stumbling around trying to kill enemies with your useless bite attack. Muttley can crane his head forward a whole two pixels to attack, and the enemies can only respond to this fearsome attack by happily bounding around and forgetting you even exist. If you’re foolish enough to try to kill any enemies with the bite, there’s about a 50% chance it will work, a 50% chance the enemy will dodge it and a 100% chance you won’t give a shit.

Check out the full review right away, you boob.