Thomas Edison is a historical figure. Thank you, I remembered that all by myself. Didn't even have to look it up on Wikipedia. 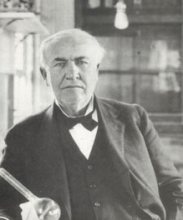 When you think of Edison - as you so often do - you probably picture a smart, industrious guy that invented a bunch of stuff. That's all true, but every now and then you might also be reminded of how much of a colossal jerk he was.

Knowing that Nikolai Tesla's alternating current system was capable of transmitting power more easily and efficiently than his own direct current method, Edison launched a full scale media campaign to confuse the issue in the public's mind. As part of this campaign, Edison attempted to depict AC as a frightening and extremely dangerous source of energy. How did he do this? By taking part in the development of the AC-powered electric chair and by electrocuting animals (including an elephant) with AC.

He didn't kill the animals with electric chairs, mind you. He just used specially designed rigs with the sole purpose of publically killing animals so that he could profit financially.

Edison is, of course, commonly known as the inventor of the light bulb, but in truth he improved upon an existing design. In fact, much of the work attributed to Edison was done by underlings and patented by him. He was, in many ways, the proto-eBaumsWorld. 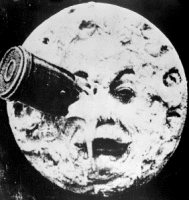 Then there was Georges Méliès. An early French filmmaker, Méliès is featured prominently in Martin Scorcese's new film Hugo. You know that iconic shot of a rocket poking into the eye of the man in the moon? That's from Méliès' A Trip To The Moon, a film which was obtained (as in copied, not bought) by Thomas Edison. Guess what happened next?

Edison released the film in the United States, making a tremendous profit. He did not give a cent to Méliès, who had no recourse due to the state of copyright laws.

A relatively unknown inventor named Bradley Pelsgraft came up with an automated shoe cleaning station. Made of cast iron, this weighty device rubbed Edison the wrong way. Edison didn't have a competing invention, he simply had an irrational dislike for the product. In order to prove how dangerous it was, Edison dropped several off the roof of a skyscraper, killing three people and crushing an old woman's foot.

Years later, Edison tracked down a homeless Pelsgraft and shoved a thumb up each of the poor man's nostrils and held fast until he passed out from exhaustion.

A cartoonist for the New York Times placed a light bulb above a character's head to communicate the formation of an idea. Edison demanded compensation for the paper's use of his invention's likeness. When the Times declined, Edison invented the internet and drove print into irrelevance. 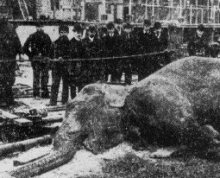 Finding himself with a lot of free time on his hands in his later years, Thomas Edison took up a new hobby. He ran wild through the sidewalks of major cities, tipping the hats off of every man he passed. When prompted for a reason for this outlandish behavior, Edison would feign a deep sleep.

Long known for his penchant for making scathing comments about his servants' calves, Edison fell ill in his later years and found himself unable to hurt their feelings.

With the help of his underlings, he spent the entirety of one winter holiday locked in a room at work on a secret project. When his team emerged, Edison seemed even more pale and sickly than before, but his gaunt face was lit by a smile. At his side stood a wondrous marvel of technology: A mechanical man.

The machine's limbs were designed to move fluidly, its face able to take on human expressions, its voice was clear as a bell. Amazingly, it only required a few turns of the gear on its back every morning to wind it up for an entire day of operation.

"What is the purpose of this fantastic creation?", asked an astounded servant that had been with the family for more than thirty years.

Edison replied by smiling and commanding one of his younger apprentices to wind up the mechanical man.

The wonder came to life, bouncing in place for a few moments, clicking as its clockwork eyes took in its surroundings. Finally, it turned to the servant and stated: