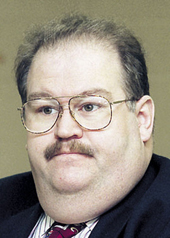 Your local representative, Don Trunbert.Greetings, constituents. I assume most of you are wondering why I called this emergency press conference. But before I continue, I'm going to have to ask you journalists in the front row to lower that tarp. While I would like nothing more than the national attention it would garner, no one is "going Dwyer" this afternoon. The "harried state" and "cursing spells interrupted by screaming fits" promised by my PR firm? All part of an elaborate ruse to draw you here, along with the prospect of free bagels. Well, actually, the bagels are real. But please only eat one, and keep your crumbs away from the roving pack of tuberculitic street urchins that always seems to find its way into any unlocked and heated building with an unprotected food source.


Anyhow, things didn't always used to be like this. Remember the year I left my cancerous wife for a woman with significantly less cancer and oldness? I couldn't crack open a magazine without seeing that infamous paparazzi shot of my mistress and I making tender love on the hospital bed next to Mrs. Trunbert's -- may she rest in peace. And when I left my mistress for my mistress' daughter, well, you've never seen an innocent prom afterparty picture blown so far out of proportion. My point is, no matter which media outlet I turned to, I could always count on hearing a story about yours truly the next day. Hell, a lot of the time I'd just be bored as all get-out and make up some nonsense just to keep my name out there. Like the time I stated vitamin C caused mental retardation, and our district suffered nine scurvy-related fatalities -- wow, talk about making Trunbert a household name!


I don't want to tell you how to do your jobs, but lately, I don't think you've been doing them. Honestly, people; are we really so jaded? Two months ago, I razed all of our local libraries and had each one replaced with a RedBox that only offers Gerard Butler movies. What did I gain for my efforts? Not a peep from the press. And how could we forget that industrial fog that rolls in every night, melting the spinal 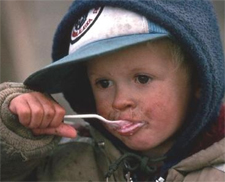 A child with two hands clutching a hungry stomach is a child with two hands that can push a broom. - Benjamin Franklin, Poor Motherfucker's Almanackcolumns of outside pets and causing area birds to grow full sets of sharp teeth and human fingers? All me. I even got this cool watch from the nice people at DuPont which informs me of the nearest escape zone should the fog breach my household perimeter! Months of planning, sitting through endless lobbyist presentations, and cashing giant novelty checks -- what did it get me? Lookie here, I'm eight down in a newspaper crossword puzzle distributed to a region with fewer literate people than the center of the earth!

Okay, smart guys -- get a load of this. I propose that we teach our troubled inner-city kids some responsibility by requiring them to take over custodial services in our schools. They'd earn a few bucks on the side, learn valuable scrubbing techniques, and become accustomed to the debilitating joint and back pain which will soon become their constant companions in a life of fruitless toil in the service industry. Yessir.

What, so no questions on this one? No one's even tweeting this? You, is that camera on? Well it doesn't look like it is. Anyway, moving on, this bold new plan will finally shatter the custodial union -- I think we've been under the thumb of Big Janitor for far too long. And those students who excel in this program may be allowed to advance to my new child solider initiative, which will allow patriotic youths to serve their country several years before they'd be able to fool a desperate recruiter into thinking they're 18. I have talked to several armed forces superiors and they have stated that the child supersoldiers of Africa can easily handle automatic weapons, and also that their still-developing brains have not fully learned to fear death. Why not bring some of that gumption to our neck of the woods? Heck, we might even be able to shut down the obesity ward of the children's hospital.

Yes, you -- ask away. Well, that didn't look like a nose scratch to me. Is that a tweet? Are you tweeting? Listen, vote for American Idol on your own time. Christ I can't bel -- someone get those kids away from the bagels. Okay. Eyes up here, people. Eyes up here. Simon, dim those lights. It's time to bring out the big guns. 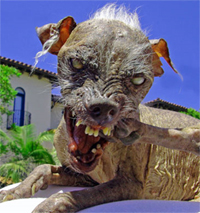 Dogs left in the fog quickly turn into strange beasts the local children have named "fogdogs." I assure you this problem may be in next year's budget.Slavery. Yes, this is going to be my new platform. I'll be the first pro-slavery politician since Strom Thurmond. Are you people even listening? I want to literally enslave every black person in America. Nothing? No response to this? You people do realize what I'm saying, right? This isn't a Twilight Zone scenario where I'm really dead but don't realize it yet, is it? I see most of you are nodding your heads as if to indicate it isn't. Maybe I'm not being clear enough here. We all remember what slavery is, right? Untold suffering, human beings being treated as beasts of burden, babies torn from their mothers, said events being portrayed in a positive light by Walt Disney -- I cannot possibly take a more extreme position than what I am stating at this very moment! Well, I guess if you wanted to split hairs, I could always up the ante say "We should just round up and kill all the n --"

Wait a mo -- getting a phone call. Hello? Yes. This is he. You are? Wonderful. I can be at the airport in two hours. See you then.

Well folks, looks like old Don Trunbert's finally making the big leagues; that's right -- I'm finally being considered a viable Republican candidate for the 2012 Presidential election. Given that I've already used all 108 of my vacation days, I believe several consecutive sabbaticals are in order. In closing, I only hope that you remember me not for my past 17 years of service, but for the series of war crimes I plan to take part in the second I penetrate that most oval of offices. Hail Satan.