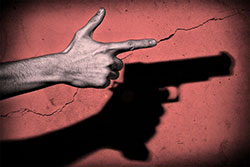 Uh I hate to break it to you, media, but that's not how guns work. Idiots.I'm frequently approached on the street by complete strangers, who pull me aside and casually ask, "hey Rich 'Lowtax' Kyanka, how can America put an end to all the senseless gun violence that takes hundreds of lives every day?" This is primarily why I spend a good majority of my day filing restraining orders.

Before we can solve such a complex and multi-faceted issue, we must first examine the history of this great country of ours, the United States of USA. Our freedom-loving, slave-owning Founding Fathers decided to flee England in 1776 due to the Queen of England being a total bitch, so they loaded up all their shit in the Nina, Pinta, and the Santa Clausingo, and sailed for the country well known for its unbridled freedom, the paradise known as "America." Well back then it was named "Indiantopia," because the Native Americans in those days were highly racist against themselves.

Thomas Jefferson, George Washington, Thomas Edison, Thomas Einstein, Baby Einstein, and Baby Sinclair from "Dinosaurs" took their first steps onto the majestic coastline of Beachwood Beach West, New Jersey, and triumphantly exclaimed, "we are now free from a government that rules with terror and tyranny. Now let us start rubbing blankets with AIDS and hand them out to all the weird looking red people who haven't yet all been relocated to uninhabitable land full of crooked casinos and liquor stores."

Between that moment in history and now, many other important things happened such as: 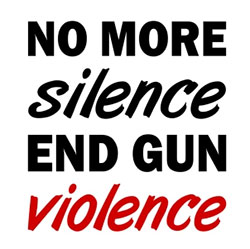 LOL it rhymes, I can't possibly fathom why this didn't end all gun violence.All this leads us to where we are now, which to the best of my knowledge, is right here. If you haven't been keeping up with the news lately, every single paper has a variation of the same story as their headline every single day, such as:

Gun violence has grown so uncontrollably that a recent study concluded for every one living resident of Chicago, three other residents are shot to death every single day, including the aforementioned living resident. This is an incredibly surprising and absolutely unsettling trend that has, in no way whatsoever, been consistently happening in every major US city, growing at a steady rate for the previous six million decades. Scientists predict by the year 2024, service industries will run out of living people to hire, and will be forced to let corpses operate the deep frying machines.

So how do we address this complex, multifaceted issue that affects each and every one of us, assuming each and every one of us are currently dead or in the process of becoming very dead after being shot repeatedly? Politicians have been promoting their own weak, ineffective ideas for decades now, and all of them end up being abject failures, such as:

It's no surprise that the government is unable to formulate a plan that reduces gun violence, and I'm not just saying that because the government is unable to formulate a plan to do absolutely anything successfully ever. This is where we, the private citizens, more specifically me, the private citizen, steps in. While taking an absolutely humongous dump on the toilet this morning at 4:00 AM, I started contemplating how unbelievably smart my brain atoms are, and it would require absolutely no effort on my part to solve this whole gun violence deal, despite the fact that I was, at the time, unbelievably drunk.

So without further ado, I present to you my surefire (ha ha get it?!? It's stupid!) way to eliminate all gun violence in the US and return us to the glory days when everybody was nice and cordial to each other. That's why it was called the "Civil" war, you know.

HOW TO ELIMINATE ALL GUN VIOLENCE IN AMERICA, BY RICH "LOWTAX" KYANKA, AGE 42

GREAT IDEA #1: Force all gun manufacturing companies to begin production of guns that, when used, insult the user's penis. Like there could be a little mp3 player with a speaker in the grip, and when you shoot a bullet, the gun says "hey buddy, your dick is probably gross and smells weird and curves in a totally fucked up way." Then the criminal will instantly stop shooting and get into an argument with his gun, at which time somebody else with a gun (and earplugs) shoots him to death.

GREAT IDEA #2: The government should form a business partnership with every company that prints dictionaries, and continually change the word "gun" to mean something completely different every other day. Imagine the scenarios:

Then the evil criminal, unable to deal with the shame he has brought upon himself and his family's good name (his name is "Bob Illegal Criminal"), will have no choice but to chain himself down in a basement and eat worms for the rest of his life, much like popular gay rights icon the Babadook. 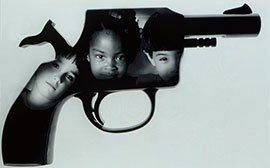 This gun is pregnant with triplets.GREAT IDEA #3: Hire Santa Claus to break into everybody's homes and replace all their guns with those stupid ass shitty presents his asshole elves made in the North Pole in all those crap 50s Christmas movies. Santa pretty much has global clearance for breaking and entering, so why not take it a step further and let the fat old bearded fucker replace somebody's Glock with a tiny garbage wooden toy horse that no child in the history of the universe has ever even vaguely desired? The only possible issue that may arise here is Santa getting shot by gun owners, but let's be honest, he's wayyy past his prime anyway. It's fucking 2018 and you seriously believe children want jack-in-the-boxes? Jesus Christ, no wonder our kids are growing up to hate humanity.

GREAT IDEA #4: Round up all the people who do not own guns, then allow government firing squads to shoot them to death before the evil gun criminals have a chance to do the same. Most gun violence is due to either personal disagreements regarding personal hygiene, or with the main goal of causing a person who was previously living to become dead. If the government just takes a courageous stand and announces 99% of the population will be summarily executed, the criminals will lose all motivation to shoot them! Have you ever tried shooting a corpse before? It's dumb as fuck and a complete waste of time! Owned by logic, gun criminals!

I firmly believe that my groundbreaking, revolutionary ideas will permanently solve the waves of gun violence sweeping our streets, like a street sweeper except instead of having broom bristles on the bottom of it, there's just a whole bunch of firearms and it doesn't really clean up the streets as much as it confuses every party involved. If you work for the government, please hire and offer me a lucrative job position with plenty of benefits, such as getting paid regardless of if I actually show up at the office ever. Just like our Founding Fathers, I, too, refuse to wear pants in public.