The passionate touch of another human is one of this life's few pure joys. Every embrace heightens our senses, an intoxicating chill that affirms our very existence. Making love is a beautiful thing, unless you are an ugly person or the skin on the back of your leg does a weird thing when you squat.

If you had to explain all the complicated feelings and sensations wrapped up in attraction and love, how would you do it? Artists of all types have tried for thousands of years. While the great ones managed to evoke some emotion, none have really been able to sum it all up. It just doesn't seem possible.

Well, I might have found something that comes pretty damn close. 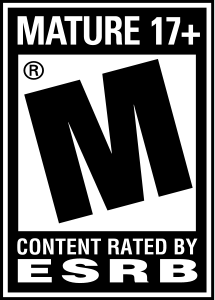 The ESRB is an organization that inspects the contents of video games. They write up a terse summary of everything that might be considered offensive or inappropriate for children, then slap their rating on the front of a title's box. Through these detached, nearly alien explanations of the events that take place in video games, I believe that we have the most insightful perspective on what it means for a human being to make love.

- ESRB description of Devil May Cry

"One level takes place inside a strip club, which depicts women dancing on poles or performing lap dances in front of male clients; some strippers wear small pasties over their nipples. Other sexual material includes a female character briefly reaching for a man's groin, and a woman stripping down to lingerie in front of Agent 47 (e.g., 'I love a hard man . . .'). During some missions, characters can be observed snorting cocaine off a table or smoking from a bong near marijuana plants. The words 'f**k,' 'sh*t,' 'p*ssy,' and 'c*cksucker' can be heard in the dialogue."

"Most female fighters are dressed in revealing outfits (large amounts of cleavage); their breasts sometimes jiggle while standing or fighting. Some bikini-style costumes (with thin strips of cloth) barely cover fighters' bodies, exposing large amounts of breasts/buttocks; one hologram-like figure appears to be nude—though her reflective skin obscures any discernible details (i.e., nipples or genitalia). In Photo mode, players can zoom in on fighters' cleavage or underwear as they pose for the camera."

- ESRB description of Dead Or Alive 5

"One female boss character (a human-spider hybrid) is depicted nude—though without any discernible details (i.e., no nipples or genitalia); during one attack move, she briefly caresses her breasts while straddling on players' character."

"Firefights are highlighted by realistic gunfire and exaggerated explosions; injured characters scream and emit large blood splashes when hit. Players can also perform 'cinematic kills' that include zoomed-in camera angles and slow-motion effects (e.g., stabbing a man in the thigh before slashing him across the chest)."

"A variety of scenes depict a supernatural villain who harasses female characters and makes sexually suggestive comments (e.g., 'Come, come and sit on daddy's lap. We'll have fun exploring each other,' 'You can be a cunning linguist, my dear,' 'I'm dying to leer at her longingly,' and 'Mmmm, the height of ecstasy, licking a nubile maiden's wounds!'/'No, hey stop . . . I said stop it!')—accompanying licking sounds can be heard off screen. In one sequence, a character moans as she is massaged by another woman; suggestive dialogue can be heard throughout (e.g., 'Don't carry any of those impure thoughts,' 'Ahh, I'm so sensitive to this . . . Ahhhahahahaha! I can't take it anymore!'). The words 'sh*t' and 'b*tch' also appear in dialogue."

"During the course of the game, some of the dialogue contains suggestive remarks (e.g., 'Would you bang that?'); in one cutscene, a character jokes about Davis's love life while making a thrusting gesture. A city billboard depicts a faded advertisement for a strip club (e.g., Sassy Twins). The words 'f**k' and 'sh*t' can be heard in dialogue."

"During one sequence, a distraught demon-like creature seizes Dante's right hand and slowly guides it across her bare chest; during another, 'shade minions' in high heels moan lustfully—in the Lust level—as tentacles protrude from their stomachs, their lower regions. As for the nudity: a tapestry-style (hand-drawn) image of a topless woman embracing a man; the same art-style depicting a slave woman—breasts exposed—lying on the floor with the guilt-ridden; a naked woman on a stone slab levitating in the air (only her breasts are fully defined); the aforementioned topless Cleopatra; and a bluish devil/demon in boss-battle mode—its penis visible during the flying and fire-spewing, the standing around (there are equivalent physics applied to female/male body parts)."

"Players can also initiate brief romantic encounters between characters: dialogue choices are made, leading to kissing and caressing on a bed—sexual activity is implied. In one of these sequences, an alien character's buttocks and breasts are briefly depicted."