That's So Punny, submitted by sosumi. Only hermaphroditic shut-ins, smelly and bearded Linux geeks with Monty Python posters on their wall, and those too retarded to even control their bowels enjoy puns. Another very similar breed of bottom-dwelling human suckfish exists solely to create painfully inane and unfunny webcomics. If you crossed these two hereditary lines tangled in the sewage encrusted sump-rotor that's causing the gene pool to back up and smell like shit you would create a sort of Internet comedy CHUD. Slinking through the pipelines of the Information Horror Skyway, these creatures would be too hideous to live and too prone to multiply to die. Thus far we've been lucky, as the only living specimen of the punny-crazy/webcomic hybrid can be found at "That's So Punny" and based on that site he isn't going to be spawning any time soon. 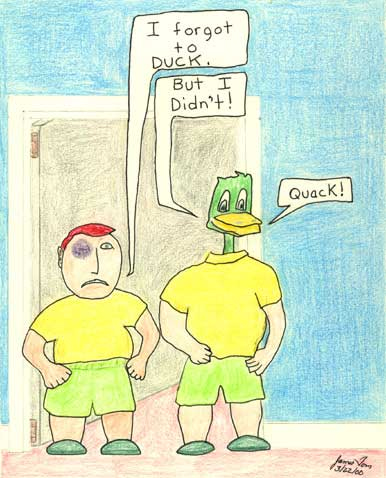 My name's James. I work and live in the Silicon Valley and draw cartoons as a hobby. I also enjoy writing and will someday publish a novel.

Not surprisingly a quick browse of the non-comic portions of the site revealed that he was a fairly hardcore Christian. I say not surprisingly because these comics are so awkward and unfunny they could have only come from a highly religious person. You see there's a slider in the brain of every human being. On one end of the spectrum you have "funny" and "enjoyable to be around" and on the other end you have "really religious". James somehow wedged his so that it went about 9/10ths of the way over to religious and then fell into a black hole consisting of anti-comedy from which not even the smallest particle of LOL can escape. He also can't draw worth shit and includes a quote from George W. Bush amidst quotes from Jesus, Carl Jung, and William Blake; which makes two more reasons why I want to shove him down a flight of steps. That brings the total to...how many comics does he have on his site? Whatever that number is plus two.

But hey, he's writing a novel! No one who sucks could possibly write a novel.

"You know I would," Margie answered without hesita- tion, making me wish that I had just met Margie and at the same time glad that we've known each other as long as we have, for it is said, that we are the sum of our total experiences, so if I hadn't known Margie I'd be a different person today and maybe she wouldn't like that man as much as the one she knows now and maybe I wouldn't care for the woman she would be having not known the likes of myself.