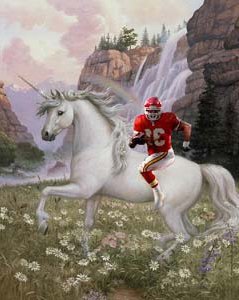 Since Kevin "Fragmaster" Bowen has been banished to the Island of Misfit Toys for embezzling from the Bandwidth Fund to support his growing poker addiction, it leaves the responsibility of being the front-page "sports jerk" squarely on my shoulders. I know full well that sports are really stupid when you think about them, and are merely a distraction to keep people from rioting or using their brains; nevertheless, I enjoy gladiatorial events immensely.

As a Dungeons and Dragons nerd, it is an easier transition than you'd think to get into the sporting realm. Like D&D, it's full of statistics to memorize and compare all night long alone in a shed. Sports fans are just as bad as dice rolling geeks, but without the stigma of social mockery, Kobold encounters, or Cheeto mustaches.

But I digress. If you are reading this right now, then you were wise enough to pay $14.99 for my Super Fantasy Football Strategy Pack, a total inside track for your weekly fantasy football changes and updates. You didn't buy into those sub-par fantasy packages offered by Yahoo or ESPN. They are staffed with old women and drug abusers who pick random names out of a hat and run away with your hard earned money and then spend it on lawn decorations and smack.

You can be assured that I have done my homework, and have friends in the locker rooms of every stadium in the nation. These "friends" may just be rats, but they will not fib about the latest hot rumors floating around the clubhouse, nor about the various snacks kept in the players' lockers. Yes, I speak to rats. That's just how complete and in-depth this fantasy package really is. Let's get this party started.

UPGRADE: Jake Plummer
After years of trying to grow a mustache, Jake Plummer has finally completed this epic project on his upper lip -- an undertaking that rivals the building of the Pyramids and Panama Canal. But fantasy fans that have Plummer on their roster know that it was well worth the effort, for this mustache has given him the magical power of divine wisdom. This newfound power decreases the chances of Plummer throwing an interception at the goal line or fumbling the ball at the worst possible moment. This is good news for fantasy players who are lucky enough to nab him in the 10th round this year, or in a trade for a sandwich. Take my advice, never trade while hungry.

DOWNGRADE: Priest Holmes
After various failed settlements and appeals, Priest Holmes has lost the sexual harassment case that I filed against him last year. It was filed after a shocking post-game incident that occurred while I was working as a towel boy in Kansas City. For his saucy advances, Priest will be fined $50,000, and will be suspended for 3 games. If you don't have Larry Johnson, then pick him up, but try to avoid flirting with him by slapping his behind with a towel and leaving your hotel key in his jock strap. It seems to give players the wrong impression.

UPGRADE: Deuce McAllister
Deuce hurt his ACL and will be out for the rest of the season. The reason this is an upgrade instead of a downgrade is because, after the injury, his great uncle passed away and left him a haunted mansion as an inheritance. With his time off, Deuce is leading a team of ghost hunters into this castle, and their exploits will be featured on the Sci-Fi channel in time for Halloween. Don't drop Deuce so fast, because he's got some ghosts to bust! (Busting a ghost is 5 points in some leagues!)

DOWNGRADE: The Detroit Lions
The offensive line for the Detroit Lions is so weak and slow that they've been replaced by tackle dummies. Although this is buying Joey Harrington a few more seconds, he is still throwing 10 feet behind his receivers. Also, Charles Rogers was found in a treehouse with Ricky Williams, smoking pot out of a makeshift honey bear bong and reading naughty comic books, adding even more suspension time to his current punishment. To make matters worse, the Lions defense, who have been playing very well this season, filed for separation from the team on the basis of irreconcilable differences with the offense.

DOWNGRADE: David Carr
Speaking of offensive lines, David Carr of the Texans has been sacked so many times that his teammates have taken to calling him "spud". Medical experts predict that he only has ten sacks left in the season before he suffers major brain damage and/or death. If you have any Texan players, drop them, because it is expected that the team will flee to South America for the rest of the season and hide out with the old Nazis and banished dictators.

News and Notes: The latest news on your favorite fantasy players. 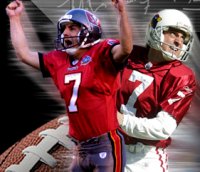 The Grammatica Brothers open a Restaurant: This season the famous pair of kickers, the Grammatica brothers, have opened an Italian restaurant called "The Leaning Goalpost". Patrons say that the kitchen is full of zany mix-ups and misunderstandings, leading to comedy of the highest degree. Just last week, Martin Grammatica ordered a case of crabs, but Bill Grammatica thought that the cook had given him an STD. He disguised himself as a bowl of linguini, but was served to a customer, much to their disapproval. Then Martin slipped on a loaf of bread, knocking over a pan of oil, and accidentally started a fire that causing the horrible deaths of 32 restaurantgoers. This incident is being used as the premise for a new sitcom on UPN next season.

The NFC North sent to Canada: The NFL commissioner has decided to send the NFC north to the Canadian league, since it no longer is playing up to standards befitting a NFL professional division. The Lions and Bears are currently tied for first place of the division with 2-3 records, and Green Bay and the Vikings trail behind. "In Canada," the commish says, "this division will get the help it needs to gain back their self esteem and rebuild their respect around the league." Doug Flutie has been brought in to supervise and has been given the authority to ship the worst players to Europe unless they shape up.

Who's Riding the Pine: This feature will tell you who to put in and who to sit on the bench this coming fantasy week.

Kurt Warner vs. Jeff McCown: I'm going to have to go with McCown on this one, and not just because I'm bitter that I drafted Warner for the past three years and it's led me to nothing but heartache and severe concussions. If he gets any more hits to the head, he'll start trying to walk on water and probably drown in a seal tank at the zoo. Frankly, I think he is just trying to get killed out on the field like a man rather than having to go home to that Jesus-freak harpy of a wife. Jeff looks good right now and you will keep him in if you are smart like me.

Tatum Bell vs. Mike Anderson: Denver's running back by committee strategy has been the bane of fantasy players for years. You never know when one of them is going to get 100 yards and a touchdown, while the other one sits on the sidelines munching on a sno cone for a measly 2 points. (Sno cones count as 2 points in my system.) When it comes down to decisions like this, I always go with the guy who has a cooler name, because the biggest thing about being a running back is having the unique, flashy name. The rest is just clicks and whistles.

Santana Moss vs. a Pudding Cup: I think you have to go with the pudding cup on this one. The pudding cup is delicious, and it's playing against a weak Buffalo run defense.

Chris Osgood vs. Manny Legace: Sure Ozzy won the Wings a cup back in the day, and was in a great fight with Patrick Roy, but Legace is getting the job done and should keep his spot until he hits a wall. Don't be fooled by his GAA so far. With the new rules, the scoring is up and the shutouts will be rare. Plus, a rat told me that Osgood is a Wiccan and that can't be good for the team. 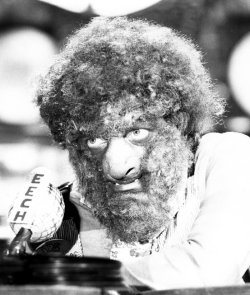 Frankenstein vs. The Wolfman vs. Dracula:Everybody thinks that this week the Wolfman will beat Frankenstein, but they fail to mention that he'll be on artificial turf, which is a weakness of the Wolfman. Frankenstein has those huge boots that can tear it up on the turf, negating his lack of speed and agility. But don't forget about Dracula. He will take advantage of the quarrel and try to claim the title of King of Monsters. Frankenstein isn't going to have any of that, though, and my prediction is that his brute strength and passing arm will carry him on to victory, as long as the mobs don't bring torches into the stands like last week.

Starbucks Coffee vs. Dunkin Donuts Coffee: I don't care what you Eddie Bauer wearing yuppies say, pure Arabian Dunkin Donuts coffee is the best coffee in the world, and your overpriced and overroasted turds-in-a-cup can't compare. Take that, you sycophantic java-fuckers.

Okay, I seem to have lost track of what I was doing. That tends to happen when I mix my Zoloft with rum and clove cigarettes. No, I'm sorry, you can't have your $14.99 back. If you follow this strategy pack to the letter, your team will be victorious for this week's outing and you can rub it in your friends faces until they do you bodily harm and stop calling. Of course, next week is a brand new fantasy week, and another $14.99 charge for the hottest rat-based inside information on the Internet.

The death toll soared to 79,000 Wednesday from South Asia's mammoth earthquake, following a survey of one of the two hardest-hit Pakistani regions — making it one of the deadliest quakes in modern times.