The whole world has gone Harry Potter mad all over again, with Deathly Hallows, the seventh entry in the seemingly endless series, making its debut over the weekend. We decided to do a little something special to mark the occasion children and adults who should know better have been eagerly awaiting. We start with Martin R. "Vargo" Schneider giving us his take on the latest film. To kick things up a notch, we cranked up the old Chron-E-Mail-O-Tron to find out what Donovan Laird, critic of the future, had to say about young Mr. Potter's cinematic outings. Finally, we all nipped out to the pub and left Montague "Legally Sane" Smythe on his own to ramble on about the damaging effects of magical fantasy literature on the children he is not allowed within 500 yards of.

EXPECTATIONS: Harry, what are you doing here? No, we can't do this. I've moved on. I'm in a good place now. You've hurt me too many times before. You told me you changed last time. You said you've changed six times already. I won't let you do this to me again.

REALITY: The fantasy genre is a difficult one to work in lately. Not to say "Kids These Days," but Kids These Days only want their magic dark and brooding, yet somehow bright and sparkly at the same time. What I'm saying here is that kids are dumb and like dumb things. So how do you make a decent fantasy movie in 2010? Turns out the answer is "Ignore the crap out of the fantasy stuff."

From the beginning, we're told this will be the darkest of the increasingly genocidal Harry Potter movies, and I mean that literally. It's like the very first line of the movie. There's an impressive opening sequence where we see our three heroes Harry Potter (Daniel Radcliffe), Hermione Granger (Emma Watson) and Ron Weasley (Rupert Grint) all grown up, revisiting their homes for the last time, and, in Hermione's case, deleting the memories of her parents and setting out on her own. The film goes out of its way to tell you how different it will be from the other six, which is good, because it gives Deathly Hallows the ability to stand on its own and not be judged against its predecessors.

What's brilliant about David Yates' direction is that while the film constantly reminds you of its dark tone, it also remembers to be a family movie, and there's levity to break up the tension, which actually helps the pacing of the film rather than making it feel uneven. Within the first twenty minutes, we're given the aforementioned heartbreaking scene between Hermione and her parents, followed by Daniel Radcliffe in a bra, followed by the murder of a beloved minor character who has been around for the entire series. Immediately following that, we see the dark-and-all-mighty wizard Voldemort get his ass handed to him by some power lines. Suck it, wizarding world.

Somehow it all works. The movie is not afraid to make younger audiences handle some of the darker stuff, and in fact, ends on kind of a hopeless note. This is the Empire Strikes Back of wizard movies, and that's said with nothing but respect. Deathly Hallows is unique in its tone, its lighting and pacing. This is not a movie about magic. This is a detective thriller that happens to contain magic wands. This is Brick with a flying motorcycle. There's a fantastic blend of muggle world/magic world contrast that the film series has been trying and failing to achieve ever since the third film, back when Alfonso Cuaron decided to let the actors ditch their fruity robes and put on some real clothes. 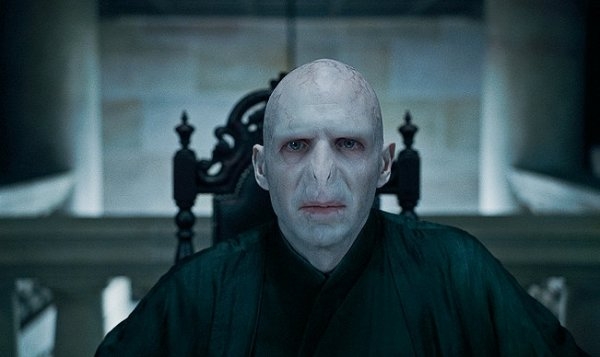 Remove an actor's nose and he becomes the embodiment of all evil. The same applies for eyebrows and penises.

What this does, however, is shift the dynamic that we're used to in a way that is unsettling at first, then gradually acceptable. Now that we're finally admitting that the wands are basically wooden guns, the character who is best with a wand is suddenly the biggest badass. Hermione shoots a man through the glass counter of a diner, gets rid of a witness, puts the place on lockdown so she can erase the man's memory, and then is only upset because she didn't get to give Harry his birthday cake. If I were to boil this entire review down to one sentence, that would be it. It's bizarre, but understandable. Just as it's bizarre to have Ron be talked out of killing a wounded enemy, and it's bizarre to have Harry send a pair of house elves to round up a con man for interrogation. It's also bizarre that both the house-elves and the con man look like Phil Collins, but there you are.

Harry and friends even pull the "knock someone out and take their clothes" staple of the detective genre, only instead of clothes, they use a potion to take the other people's identities. This leads to one of the more entertaining sequences in the film. The actors (David O'Hara, Steffan Rhodri, Sophie Thompson) portraying confused teens in another person's body wander around the Ministry of Magic with such bewilderment on their faces you almost forget that this set piece is designed to resemble a Nazi propaganda machine. This macabre comedy almost evokes the spirit of a Tim Burton movie, back when Tim Burton made movies worth evoking. In fact, the whole film has that sense to it, including a brilliant animation sequence that was almost certainly influenced by Burton/Henry Selick's work. If I were Tim Burton after seeing this, I'd start asking questions about Helena Bonham Carter's relationship with her director. After all, David Yates seems to be going out of his way to prove he's better than Burton at everything else, why not that?

Speaking of set pieces, the biggest departure from the rest of the series is that Hogwarts Castle is never seen. (The train is, though, in a hijacking scene that made me whisper "Kneel Before Zod!" in my theater.) Interestingly enough, even with all the freedom that opening up the world has given us, by confining our heroes to secure locations for most of the film, it actually feels more confining and claustrophobic. As a result, the ensuing relationship problems between the three seem more believable, though the way they're handled is one of the film's few faults. There is an a strangely forced dance sequence, and some fantasy nude make-outs that reminded me of the dream-sequence in Watchmen, in the only possible way to make that sequence more awkward. It's as though David Yates was desperately trying to force sexual tension between these actors who have literally spent most of their lives together, while still remembering that this is a family film, and the resulting failure is just off-putting. But when the worst thing you can say about a film is that the director didn't research teenage mating habits, you're in pretty good shape.