Christian Grey in the book and upcoming movie of 50 Shades of Grey is "50 shades of fucked up" when it comes to his temper and sexiness. But let's not limit things here. There are an additional 50 shades that could show you what a cold and mean sex man he can be. 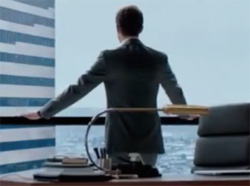 52. Motorcycle in the rain. Don't care about rain. He will ride it. Get on back.

53. (Looking real serious and mean) "Wear this airbrushed shirt with my cousin's name on it. I bought it at a state fair. Because I said so that's why."

54. A boa constrictor hanging on his shoulders. Probably one of those cool yellow ones.

55. Reflected in a window when it's raining hard outside the window he's listening to a cool podcast like one of the good Radio Lab episodes. Ana did you know we are all a tiny blue dot? Think about it.

57. He slowly licks an envelope while staring intensely. "Water bill."

58. "Turn around. I've made some improvements to our little game." It's a tennis ball tied to the sex whip.

59. If he is eating and a woman's hair is in his food he will just eat it anyway and savor it.

60. He takes off a cool gray suit jacket, hangs it over a leather sofa and says, "These fingers know more than just Javascript."

61. He goes to a zoo and the giraffes start getting nervous around him. "Guess they recognize a wolf," he says as he goes back to blowing on the referee whistle around his neck.

62. A bong? What's that? I don't put drugs into my sex body. Unless you consider sex a drug.

63. Never take the stairs if you are a cool guy. Elevators all the way. 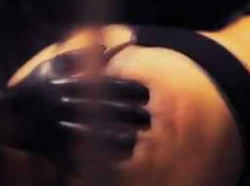 64. Turns around looking real intense, but it's scary because his voice is all quiet. "Show. Me. Your. Butt."

68. (His brow is furrowed with worry) "If you ever have a baby, you must swear to me that you will not vaccinate it."

69. Crisp suit of slate gray. Cold, emotionless face. Sitting on a burlap sack as he quickly goes down a slide.

70. Rain out the window. Thunder. "Can you buy me some deodorant I forgot to put it on after my shower."

71. Golden retriever drags its butt across expensive parquet floor. He doesn't even twitch but y'all know he is going to explode in a second.

72. Only listens to ominous classical music because lyrics make it harder for him to do crosswords.

73. Holy cow look at that Ana thought as she looked at the considerable length of his canoe. Is that even going to fit? She wondered as she watched it heading under some low hanging branches.

74. He likes feeling up boobs and nipples in a dominant way.

75. Never bothers with a clothes hanger or a dry cleaner. Just buys some new clothes every couple days.