Over the last few weeks an outnumbered but brave group of men calmly used facts and logic to conclusively prove that women are ruining video games with their lustful object bodies. You might recall that I wrote about the troubling topic myself a while back.

Those corrupt individuals who would mindlessly parrot coded phrases such as "maybe we should treat women like humans" and "games ought to be more thoughtfully made, which will ultimately benefit everyone" have been exposed as feminist propaganda spewers by the #GamerGate movement. That's great, but we run the risk of focusing on one enemy (women with breasts and vaginas) while other threats encircle us. And believe me, there are other threats.

To be specific, there are two other threats. If left unchecked they could potentially ruin video games as much as women have.

Did you know that dogs have unfettered access to game developers and the corrupt elitists who have the audacity to call themselves " " "games journalists" " "? There is no accountability, no regard for the ethical implications.

This collusion directly results in video games shoving unfairly positive portrayals of dogs down our throats. It also leads to cool parts of games getting cut to make room for preachy cutscenes where protagonists tell dogs that they are good.

And that's just on the development side. When you consider the ramifications of the dog/press relationship it gets worse. Higher review scores for games that fall in step with the disgusting "pro-dog" (anti-man) agenda. Lower review scores for games that portray violence against dogs. Actual news (such as info about DLC and platform exclusive pre-order content) going unreported while outlets run extended think pieces about milk bones. 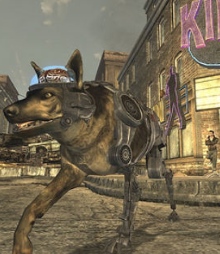 Even Fallout: New Vegas, the greatest RPG of the last decade, fell prey to the illegal and immoral influence of dogs and buildings.Don't get me wrong. Dogs can be cute, and that's fine. But they don't even play video games, so they should not influence the people who create and write about games.

If you doubt the seriousness of this issue, you must not have heard about the latest Smash Bros which features the Duck Hunt dog as a playable character.

When a game publisher executive cuts a budget, or forces a game to come out early, or issues a stern demand for a game to be dumbed down, where does he make that decision? In a building.

When a game designer adds mouse acceleration to a PC game, or panders to women by making female characters with needlessly complex and nuanced human qualities, where is he? A building.

When a games writer reviews a good game and gives it one less point on the ten point scale than it objectively deserves, where is he? A building.

Where does Gearbox Software make their games?

I think you can see where I'm going with this.

The hidden influence of buildings on the game industry is a massive cover-up of frightening proportions. Can you even remember the last time you played a game that didn't feature a building of some sort?

This games/buildings dynamic is protected by a fascist power structure, guarded by overly sensitive liberal media and Social Justice Warriors who will feign outrage over anything in order to get into buildings. Those who dare to speak up about the conspiracy are silenced by walls and possibly a ceiling.

The vast majority of game developers and members of the gaming press have been in contact with dogs and buildings.

Dogs and buildings have been featured in games.

These games have received coverage AKA free publicity AKA biased media AKA payola AKA conspiracy AKA blurfo.

The incestuous relationship between game makers, dogs, games press, and buildings has warped the industry for nefarious purposes and excluded the noble gamer. Unless we harass and threaten every person and object around us we will continue to be treated as outsiders in our very own lifestyle hobby.