Hey, Science, Can We Slow Down the Rush to Dystopia? 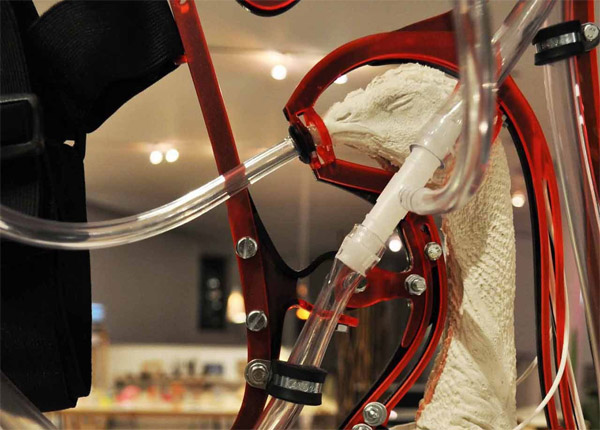 Architecture student Andre Ford wants to grow brain-dead chickens like grapes. DARPA is developing androids that a person can control on the battlefield like the movie Avatar. And then there are the genius scientists who cooked up an airborne, extra-deadly version of bird flu for no apparent reason.

Manhattan Project scientists were not so cavalier about turning the world into a living nightmare. Men like Einstein and Oppenheimer agonized over what they were doing and that was in the midst of a war that was seemingly for the existential survival of the free world. The stakes could not have been higher.

Yet, here we are, less than 70 years later, high-fiving in the lab about brewing up Mega AIDS and teaching a Roomba to double-tap tangos. It's not hubris or moral atrophy, it's the complete detachment of actions from consequences.

In the case of the chickens, Andre Ford devised a rack system, complete with circulating air and food and water, for brainless chickens to dangle in while they grow up. The premise is that chickens live in a nightmare of heat, overcrowding, death and excrement, and since nobody can be fucked to make chickens lives a little less shitty, we should just make it so they don't know how shitty their short lives actually are.

So here's the plan. Genetically engineer a chicken without most of its brain. Make a machine that cuts its feet off. Create a rack that holds the chickens, delivers nutrients and eliminates waste. All so we can cram an extra couple hundred chickens into every square meter of a chicken farm. The Wired article breathlessly describes the Matrix as the docile chickens sit and grow and, I guess, power our clanking evil octopods. Only there are no naked rave parties and subway karate fights in store for the chickens. I'm thinking their situation is less Neo and more like Johnny Got His Gun, where each silently-screaming bird must endure as a helpless prisoner within its own body. 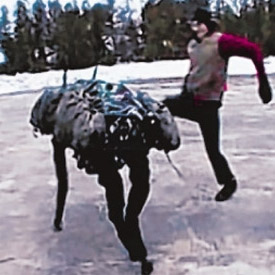 Making animals into brainless commodities may soothe whatever vestigial conscience we still possess. I argue, once you're filling racks with these zombie chickens you're opening the door to pretty much anything along those lines. Sure, let's make a pit we can fill with brainless cattle and, fuck it, let's make owls into simpletons and teach them to hang upside down from ladders by the hundreds. Slow down, scientists. I know you're in a crazy competition to be the guy who discovers the next cheeseburger in a can.

The DARPA death circus isn't much better. Every year the Defense Advanced Research Projects Agency attempts to devise some creepy new machine that will drive over us or crush us in evil robot skeleton arms. De-humanize our food, dehumanize our wars, hell, let's make a surrogate that is actually an exoskeleton full of brain-dead chickens. All of our casualties can be breaded and deep fried. Form a specialist unit. The 82nd Chicken Kickers w/ Zesty Ranch.

Then they can take that creepy donkey robot they're always trying to kick over and allow it to experience the world around it and give it emotions so that it resents us and grows increasingly hostile. Why not? They're scientists. They can do anything.

And do our Wal*Mart greeters really need a cerebral cortex? They just stand there welcoming people into the store. Their existence must be hellish. The right thing to do is engineer them to forget about their ungrateful grandchildren and the 15-minute breaks and shitty health insurance and the brown snake some fat lady in a track suit just Shawshanked out right there by the baked goods.

Come to think of it, my life is pretty lousy too. I live in constant fear of bird flu pandemics, I sit around pretty much all day complaining to people or reading the Internet.

Alright, Andre Ford, let's do this. I don't want to even care when the Roomba finally takes me out. Bring on the dystopia.