The Teens Call it Klooting 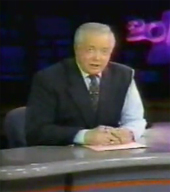 Up next: a stunning retrospective on the San Diego Chicken. You won't want to miss it.The teens call it klooting. We call it "bad news." All over the country. In your homes and backyards. Klooting has increased at an unprecedented rate. And your children could be at risk. Does your teen show any "trouble signs?"

Don't ignore the warning signs. Dr. Judith Ayer, health expert, states, "I have treated six klooting injures in the past week -- two fatal. Parents, talk to your kids about klooting. Before someone else does." Sound words from a sound mind. Klooting's a story of youth laid to waste for a cheap thrill. Young lives snuffed out like so many scented candles. And our so-called media embraces klooting. Teens can't escape its grasp, says media expert Jance Wingood. "Last week's number one sitcom had a klooting b-story and the rapt attention of our adolescents. Let's keep trash like that off the air, thanks. " 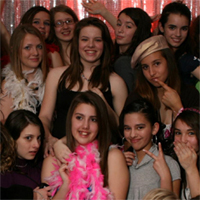 Thanks to klooting, three of these girls will be rendered unfit for marriage by age 25.Even our most Catholic of schools cannot escape the grasp of klooting. Rude teens only laugh at the threat of suspension. And these bad apples spoil the bunch, says religious teacher Helen Barch. "First comes klooting, then vandalism. I have confiscated several 'gang bracelets' from students clearly intending to engage in klooting. This red one means 'down for klooting all night long.' Pulled it off the wrist of an eight year-old. Someone should really alert an authority figure."

Even today's most popular, or "hot," radio stations endorse this vile act. Urban street bands and their pro-klooting "songs" hit the airwaves just as our youngest children begin climbing onto the school bus. But klooting equals money, especially for lead shouter Curtis "DopeFly" Polk of the FCC-fined musical group Krew 4 Klooting. Their song, "Klooting Skool," reached the top of the charts, despite its highly controversial message.

"I don't care what these motherf******* kids do, long as they don't stop klooting," says Polk, motioning to a small model of his mansion. But children caught klooting don't reap the same rewards as their celebrity idols. Often, the punishments are harsh. But fair? Sheriff Don Matley thinks so. His "Scare Them Straight" program has kept at-risk teens safe from klooting influences since its inception two months ago. "When I saw those backwards baseball caps, I thought, 'hell in a handbasket,'" says Don. "But I would take our current teen pregnancy epidemic and multiply it by ten if I didn't have to hear the word 'klooting' again." 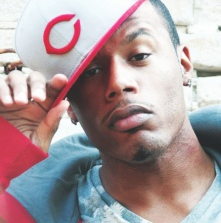 Rapstar Curtis "DopeFly" Polk, on the set of his video for "Klooting Skool." His hat brim's jauntiness is far above the legal limit.Matley's program, run out of an abandoned child jail, puts teens convicted of klooting on the spot. Offenders are forced to wear novelty pajamas, crawl around on their hands and knees, and serve five-year sentences without light or heat. And during their treatment, teens undergoing Scare Them Straight often receive weekly screamings by inmates serving life sentences. "Wish I had something like this to turn my life around," says Phil Boone, retired criminal. "Last time I had freedom, they could box your ears for ripped jeans. Klooting is still legal in more than 49 states, and several protectorates. At the risk of having rowdy teens crowd our workout yard, I say throw the book at them."

When man's law will not do, God's often takes its place. Pastor Tim Frehley, of Atlanta's Baptist Megadome, runs several teen pageants that display the consequences of klooting -- both in our world and beyond. These forty minute "passion plays" depict the klooting-free lifestyle as chaste, selfless, and devoted to the Lord. And what of those who fall to the temptation of klooting? Frehley has an answer. "Hell. A yawning maw of endless nightmares and eterrnal torment, full of mortal joys and flesh pleasures. If you're klooting, don't be surprised if your next car accident lands you in an inescapable realm full of enjoyment drug users and sex-makers as they drug and sex with you for an eternity." Chilling words.

If you suspect your teen may be klooting, pick the option that works best for you:

Scientific analyses report that we may have a klooting epidemic on our hands as early as this summer. Parents, don't let another night pass without having "the klooting talk." Hug your teen and let them know how much work you would miss if you lost them to klooting. It may be the most important conversation you ever have.

Next week -- Frazzing: Half Danger, Half Passion, ALL Deadly