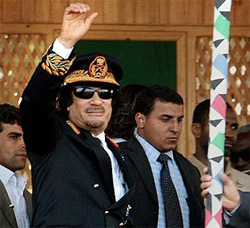 A scant three months ago I tapped out an open love letter to Libyan dictator Gaddafi based on details of his eccentric behavior that emerged from the wikileaked State Department memos. It's hard not to fall in love with a guy who always travels with a Ukrainian sex nurse and a platoon of female bodyguards, especially when he looks like former New York governor David Paterson wearing a damp fright wig.

In light of recent events in Libya I felt like I needed to revisit this topic. I've gathered the evidence and reassessed my views and, as you might have guessed from this article's title, I am doubling down.

These are uncertain times we live in. Oil supplies are dwindling, technology has transformed the speed of information, there's a new My Little Pony cartoon, and the world is currently burning with unrest. All of these things are related and each new revolution brings another attempt to quash the revolution. 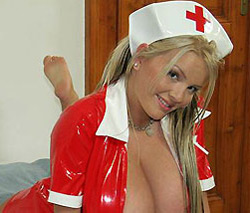 The Iranians kicked things off, but the government was able to put a lid on unrest by clamping down on the flow of information and attacking civilians using militias loyal to the regime. Many of the autocrats facing the surging tide of democracy in the Middle East and North Africa have tried to emulate these tactics with limited success. In Tunisia, incompetence reigned. In Egypt, the eyes of the world and nervous American backers of the regime prevented a brutal purge.

Being an iconoclast, Gaddafi looked at precedent and chose his own way. My man with the Fraggle fro decided that nothing legitimizes his authority quite like flying in Nigerian mercenaries to indiscriminately shoot protesters. A good choice! Slaughtering people with machine guns is Nigeria's third-largest export behind 419 emails and drug mules for the Chinese triads. 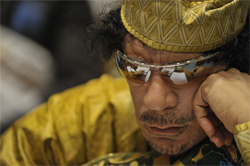 Just in case machine gun toting slaughter squads of foreigners patrolling the streets wasn't sufficient, Gaddafi told his air force to bomb protesters. Unfortunately, the lazy pilots dropping bombs on the civilians got tired and ejected from their planes or flew them to Malta, possibly to watch dudes named Magnus do ridiculous shit with beer kegs.

This has left Gaddafi in a difficult position. Fox Force Five is AWOL, his military is turning against him, and all he has standing between him and a noose are a few very, very bad men. It's times like these that test the mettle of a Brotherly Leader and Guide of the Revolution of Libya. Lesser villains have crumbled under the pressure, or at least fled to Saudi Arabia or London, but not Gaddafi. He has continued to inspire with his speeches that, well, somebody has got to be watching these videos besides me.


This instant classic is like something out of a Cronenberg movie. Gaddafi breaks into some sort of bedouin dance show with a lingering shot of a dystopian ruin lit by Christmas lights. The camera finally pans down to Gaddafi sitting in a van and holding an umbrella over his head. He reassures his troubled nation that he hasn't gone to Venezuela and that it is raining. He calls his opponents "dogs" and then right back to the bedouin dancing and a state TV host sputtering to explain what the fuck just happened.

Perhaps realizing his mysterious van video wasn't sufficient, Gaddafi went on the airwaves in a rambling speech in which he vowed to fight to the end and die in Tripoli. He also called out those he viewed as responsible for the uprising, including a mysterious cabal providing "tablets" to the "youths" that cause them to become wild and dangerous. Responsible parties include the United States, "Agents of Israel," Osama Bin Laden, and Zarqawi, who was killed four years ago in Iraq.

Despite having kill-squads of Nigerians roaming the streets and despite urging his own supporters to take to the streets and kill the opposition, Gaddafi has given everyone a big raise! Up to 150%! Is this his version of a 419 scam where you go to pick up your big paycheck and a Nigerian pops out and shoots you in the face? Probably not, since all the government buildings in every Libyan city are burning or already burned down.

Gaddafi Phones In the Crazy

In another Libyan state TV moment, Gaddafi phones in to explain the situation. It's simple, he claims. Al Qaeda is behind this uprising and they have been feeding hypnotic pills to the youth and teaching them how to misbehave. At the end of the clip he pathetically adds that he is more of a figurehead and that government institutions actually run Libya. It was the Department of Housing that hired those Nigerian mercenaries!

Fighting continues, but Gaddafi proudly stands with his Nigerian brothers-for pay and against Al Qaeda, America, Israel, and reality. No other world leaders are releasing quality material like this. Not even North Korea can keep up with this sort of flamboyant craziness. Gaddafi is the last of his breed. That's why I'm sticking with him and awaiting the exciting final broadcast from Tripoli. I'm sure he is already planning out that weird opening shot. I just hope his sexy nurse makes it out in time.