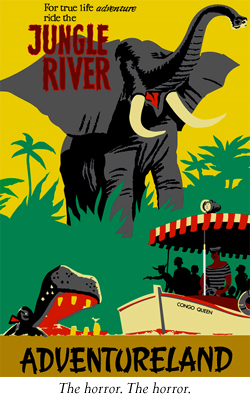 My first destination was Adventureland; here, I thought, I could at least reclaim my lost youth and silence the screams of regret cascading through my soul, as promised in the brochure. Seeing that Mr. Disney had installed a jungle cruise in his amusement center, I was a bit intrigued, but also wary. In my years, I have known many men who, under the promise of riches, had traveled into the darkest depths of The Congo, only to return with shattered countenances and Mulatto children. Seeing as I was armed, however, I knew I had nothing to fear; and within minutes, my tour guide "Chip" was guiding my party down an amazing facsimile of the Amazon.

Suddenly, danger! A large Hippopotamus emerged on the left side of our vessel. I heaved two children into the murky waters in order to reduce unnecessary ballast. Chip fired his rifle! But something was amiss -- nothing emerged from the barrel aside from a small whisp of smoke. I pulled out my revolver and caught the beast right between the eyes. Smoke and sparks showered from its split cranium. I knew then that I was right in despising the entire African continent, if such abominations could reside there, untouched by the Wrath of God. I was then told that it was permissible to fire weaponry on rides, but not while said rides are in motion. Curse these restrictive laws! 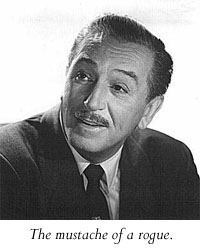 Defeated, I decided to take in one more attraction before dining on the pheasant that had been roasting in my oven since five-o-clock that very morning. Just then, something caught my eye: "It's a Small World." Knowing Mr. Disney's predilections, I originally assumed that this "ride" would simulate the comforts of a planet after necessary ethnic cleansing had taken place. I clambered into one of the cars, and was soon on my way to witness what I thought would be a scenario depicting a reality in which World War II ended in a satisfactory manner -- never bet on the dark horse, fellow gentlemen readers.

As my transport ventured through the tunnel, some Danish automatons started mewling an infernal tune; I pulled some throwing rocks from my satchel and made short work of them. Soon after, Italians, Switzers, Mongoloids: all had fallen to my mighty strength. But shortly thereafter my ammunition had become scarce, and the ethnicites were multiplying. Extreme fear of foreign-germs made my brain swell with fever, causing me to lose all manner of consciousness. I awoke in the park's infirmary, where the staff was very curt when I asked for the morphine necessary to cure my powerful head spasms.

In closing, I give Disneyland a three out of five. In the future, I suggest that Mr. Disney expand his parking lot, or provide ample hitching posts at the very least.

Addison Hillsdale IV is the Head Editor of Arts and Culture at Gentlemen's News Service and the author of 101 Scare-ifying Civil Rights Stories and Courtship Rituals, 1954 Edition.