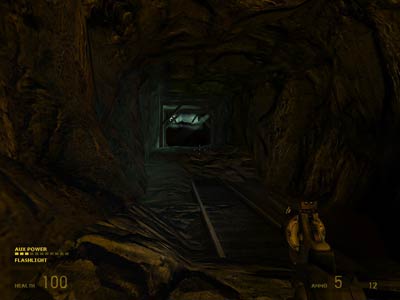 Screenshot of the abandoned mine level people waited five long years to play.One thing I've noticed as an Internet user (level 29 about to turn level 30) is that there seems to be something akin to a nerd apocalypse going on right now. You might not see it if you're not a gamer, but if you frequent any of the various gaming websites splattered all over the information superhighway you know what I'm talking about. Somewhere in the last decade or so, gamers have begun getting militant and combative. In recent weeks and months, the militant fervor that started with Halo 2 and Grand Theft Auto: San Andreas has reached critical mass with Half-Life 2. The nerds are becoming increasingly incapable of handling the passage of time and this is making them act out with threats of violence, immature behavior, and a total lack of sanity. This may seem like an inconsequential thing, but when you consider the problem is getting worse, we may be facing mass suicides and other pseudo-tragedies in the coming years.

When Pac-Man was released it was a revolutionary advancement in video games. However, there were no riots, no panic, and no complaints that it took too long. People weren't camping Arpanet forums to the extent that the flesh of their fingers became grafted to their keyboard's F5 key. It wasn't like that at all. It just came out and we all waddled up and fed it on a strict diet of quarters. Some arcade veterinarians decided their Pac-Man machines needed a specialty diet of arcade tokens, but that was fine for all of us. This was a golden time when gaming was simple. Gaming just happened. You didn't wait for gaming to happen.

Fast-forward a decade or two to now, the undead heart of the 1990s: 2004. It seems like people have been waiting for Half-Life 2 for ages. At first this was a minor thing, but in the days before release (which was early yesterday morning) human beings were regressing on a massive scale into brainless children lusting for a computer game. I won't deny I was very much looking forward to the release of Half-Life 2, but I accepted that the only way to play the game was to wait for it to come out. I passed the time by writing a fake review and coming up with intricate mythologies for the condiments in my fridge, so as to make my sandwiches taste more legendary. 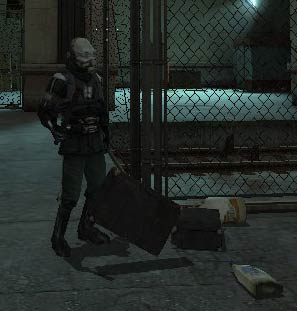 Half-Life 2 is about throwing suitcases and jugs at the forces of oppression. Thanks to Half-Life 2's Havok physics engine, you can rip out a man's heart and show it to him before he dies.Half-Life 2 brought an especially intense pre-release anxiety to many gamers. First they were told it would be out September of last year, then they were forced to wait another year by cruel game developers with nothing better to do than piss on the very fans they depend on to support their extravagant stretch rocket limousine lifestyles. True, Valve should look into public relations and marketing so as not to accidentally insist the game will be out at a certain time when there is no chance of completing it by then. I commend them for finishing the game before release, but they could have handled the whole ordeal a lot better. Granted, they achieved a type of cheap marketing in the form of hype and generating anticipation by making the audience wait like hungry dogs for a hit of sweet, sweet kibble. It's also a genius idea to let people download the game to their hard drives months before they can actually play it.

The hysteria can best be summed up in one funny sounding word: chuckleheaded. Gamers, not being able to play the game before the release date, scrambled to place blame. Some blamed Vivendi Universal, a giant monolithic corporation bent on creating a world where they can legally rape you, then legally force you to have an abortion. This heartless mega corporation defied a nation by holding saintly Valve to legal contracts they apparently signed while young and full of inexperienced naiveté, no doubt sapped dry now by the cruelness of the system. Others blamed Valve for creating some kind of legal quagmire with their decision to come up with a second distribution model that excludes the publisher. Others blamed retailers like Best-Buy, Wal-Mart, and Target for putting the game on store shelves before Valve put the game authentication servers online. A handful of more obsessive fans even called the developers at home and pleaded with them to release the game early. Strangely enough, the game was playable on the advertised day of release, so all the endless energy spent bickering, speculating, and crying resulted in nothing. Wealthy companies don't tend to change policies when you blame them for something minor, like sticking to a release date. 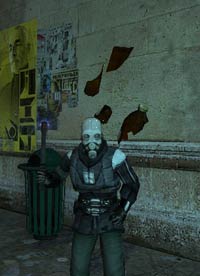 Half-Life 2 is about throwing a bottle at that same force of oppression's head and watching it shatter into a million pieces and then using the Havok physics engine to pick up each piece of glass and make a beautiful mosaic that honors our veterans.Six months before Doom 3 came out I wrote an article mocking the way the flashlight worked in the game. I read a few previews that said you would be unable to use the flashlight and gun at the same time and thought that sounded stupid. So, in an attempt to create some silly fun over a completely meaningless topic, I wrote an article discussing at length the flashlight dilemma. What can I say; I have to write about something every week. I think I got about a dozen e-mails from gamers calling me an asshole, a brainless shithead, and a moron for thinking id Software would actually do it that way. Sure enough, id Software did it that way. People were so inflamed with hate that they sent me angry e-mail because I joked about a flashlight in a game. It was worse when I wrote a brazenly fake review of Half-Life 2, where I gave the game an "A%" grade and made up a bunch of fake spoilers. I doubted such a horrifically bad attempt at a review could be taken seriously, but sure enough it was. Not only was I personally attacked for ruining a game that people "have been waiting five years just to play," one guy even had the nerve to suggest I wouldn't be removing the "Internet" from "Internet journalist" on my curriculum vitae. Lord knows I won't be getting that university job now that I've written a bad game review.

On the Something Awful Forums, a usual bastion of backwards sanity on this otherwise insane Internet, the fanaticism was just as out of control. Some goons were talking about skipping work or class to play the game, while others took more drastic actions such as forgoing SEXUAL INTERCOURSE and FEMALE CONTACT in favor of playing a video game. I don't know about everybody, but I'm fairly able to do more than one thing in a day. Usually at least two things and sometimes three if I'm on a roll. Now granted there are 24 hours a day in my clock, and of course I might be in the minority and other people might have less time each day. People all but stopped short of rescheduling major surgeries to be able to play this game on the day of release. All this after spending weeks hoping for an early release while also complaining that the game wasn't getting released early.

I foresee this trend of taking game releases too seriously continuing to more murderous extremes. I already mentioned possible suicides resulting from the crushing blow of delayed game releases or sold out store shelves, but that's just the tip of the iceberg. As games become more and more complicated and feature-packed, the fanaticism surrounding them increases. By the time Half-Life 3 or Halo 3 come out, I predict full-blown riots around Best Buy shopping centers when supplies run thin. I predict angry gamers will take petty arguments over unreleased games to bloody extremes with real life murder. If sports fans can go nuts and tear a city block up over a complete meaningless win or loss for their home team, why not game fans? There is no room for rational thought, no room for patience. These games are more fun than real life, and so we must dedicate real life to these games.

P.S. Half-Life 2 really is a lot of fun and well worth the A% grade I gave it when I lied about playing it before. Shame about Alyx turning out to be a lesbian, though.