Attack of the Beast Creatures 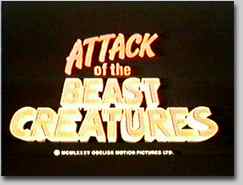 Overview: A rescue boat full of people who escaped from a 1920's-themed costume party crashes upon a deserted island. Well, deserted except for the zillions of tiny wooden monsters which run around chewing on people (a consistant theme in these types of movies). Features approximately 13 hours of footage of the director's friends running through the woods.

The Case For: Excellent scene in which every cast member is writhing in pain, screaming their lungs out, and covered with wooden dolls, "Beast Creatures" run like retards.

The Case Against: Entire movie takes place in the woods, you'll wish the whole crew was killed off within the first five minutes, music sounds like a broken analogue keyboard being repeatedly smashed with rocks. 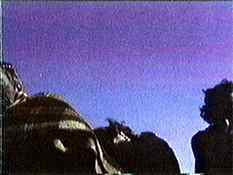 Do you like this great shot? Get ready, because the first 20 minutes are full of crap like this.

"Attack of the Beast Creatures" is just a bad movie. I don't know how else to start off this review, except to try and explain just how awful this film is. The sheer pain this video will generate does not nearly justify its limited comedic value. If you are able to find a copy of this movie in a drainage ditch somewhere, please do not watch it. You will end up depressed and unfulfilled, like after having sex with Rhea Perlman.

The first five minutes or so of this film are devoted solely to the cast screaming while various analogue keyboards play filter sweeps in the background. The film does an excellent job of convincing the audience that the movie is supposed to have taken place back in May of 1920. It does this by printing "May, 1920" on the bottom of the screen. Turns out the party boat that this crew of hack actors was aboard crashed or blew up or sank or something. I can faithfully recreate this opening scene for you here: 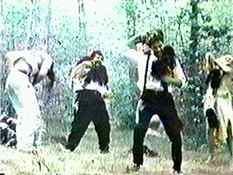 To make this scene even worse, the director chose to shoot night for night and severely underdevelop the film. Yup, the entire opening sequence is a smear of shrieking black blobs that clumsily lurch all over the screen. This proves to actually be a good thing, because the more you see of the cast members, the more you despise and loathe them and want to see them thrown into an active volcano.

They eventually wash up onto the coast of Florida which they misidentify as "Greenland." Our crew decides to trek into the woods and try to find some civilization, unaware that they're about to be attacked numerous times by the Beast Creatures which inhabit the island. Luckily for us, they've got some time to spare, so they fill the next four hours of video with sequences of the crew walking through the woods, stopping, and then walking again. The director was able to film the cast walking from every possible camera angle, both real and purely theoretical, tramping through the forest like some kind of idiot parade. The seamless interweaving of the eight cast members walking around the vacant lot next door to the director's house is one of the most thrilling pieces of cinematic excitement I have ever seen, second only to the time when Fred Savage scored 500,000 points on Ninja Gaiden in "The Wizard".