Furries + Camping = Fun for Everyone!Anyone who regularly reads Something Awful knows that the group of hobbyists / fetishists known as "furries" frequently show up as an Awful Link of the Day. For a fetish that I did not even know existed a few short years ago, they sure seem to have "blown up" like the proverbial rap sensation "Lil' Bow Wow," emerging from stuffed animal-filled closets to spread their unspeakable horror throughout the Inter-web. It naturally came as no surprise to me when I learned that the furries have insane little campouts where they all dress up as plush psychopaths and engage in their disconcerting animal roleplaying silliness. Yet when I read this article on PitchWeekly, I couldn't help but be extremely shocked and frightened. Why? Well read on...

Tyger, in his longhaired, authentic-clawed white tiger suit, is parade marshal. "Let's go shopping!" he roars, muffled by his costume. The others form a line behind him, and they march off toward the KOA's dumpy little commissary. Running to catch up with them is a fox with his tongue dangling off the side of his snout and eyes as balloonish as a cartoon's. He wears a Hawaiian shirt. A train slides by in the distance, providing a click-a-clack beat for the procession.

Essentially what the furries are doing is gathering at these campground events across America and living out their fantasies by pretending that a trash can with agitated bees swarming around it is actually a talking hippo who would enjoy being mounted. This of course gave me a great moneymaking scheme for Something Awful so we could finally stop relying on the generosity of our twelve fans to keep us afloat. I immediately contacted Dr. Frank Blacktooth, the CEO of State Og, and pitched my scheme to him. I suggested that we hold our own widely publicized furry gathering at a camp ground in Montana, jointly sponsored by Something Awful and State Og. Dr. Blacktooth readily agreed, so long as State Og could help plan the events at the gathering. I accepted the stipulation and immediately set up the long process of organizing the "First Annual SA and State Og Furry Jamboree Campoff and Parade of Shameful Horrors".

For those of you who aren't furries, I suggest you go to some less furrycentric web site immediately! Something Awful's many furry friends, please read on!

Description: Held in the scenic expanse of the Interstate 35 Exit 47 Rest Area forest, the Jamboree will be a wonderland for furries and furry admirers. Not only will it be a perfect environment for the wild beasts of the forest to strut their stuff, but also a great place to meet fellow furries and attempt to clumsily bring them to orgasm behind a concrete bathroom building.

DAY 1 MORNING - The day will begin with the festive parade of furries. Everyone should don their sicko fantasy gear and prance around like morons while the watchers in the hunting blinds area snap pictures and take pot shots with explosive ammunition. There is nothing quite like bonding with your fellow lion furries as you consume the twitching carcass of a zebra furry felled by a Marlin long rifle!

DAY 1 LUNCH - Buckets of grass and maybe some leftover hamburger from the BBQ in the hunting blinds area will be served promptly at noon (or whenever the event coordinators wake up). Please do not try to hump each other any more than possible during meal time.

DAY 1 AFTERNOON - Craft time! Get together at the craft tables with some camp counselors we bribed with marijuana and let them teach you the fine art of gluing pieces of glitter encrusted shit to construction paper. Have fun trying to do this while wearing those stupid paws. Again, we must stress that humping should be limited during craft time!

DAY 1 DINNER - Children will be brought in to feed you pellets of grain and pieces of raw meat. DO NOT HUMP THE CHILDREN OR YOU WILL BE PUT INTO THE PUNISHMENT CAVE. After feeding time, the children can pelt those of you confined to the punishment cave with empty whiskey bottles, light bulbs, and softballs which have been made significantly "less soft."

DAY 1 NIGHT TIME - Get face to face with the real thing! Several wild animals will be brought in for the furries to bond with. This year we have scheduled a tiger, three lynxes, a cheetah, two pumas, a hippopotamus, and 500 rabid rats. DO NOT HUMP THE WILD ANIMALS AS THEY MAY NOT APPRECIATE YOUR BEHAVIOR AND MAY TRY TO EAT YOUR FACE. Neither Something Awful nor State Og take responsibility for eaten faces. 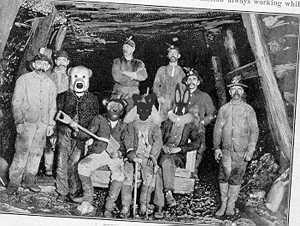 "Fun times" are had in the "fun zoo" by "everyone".DAY 2 MORNING - You will be roused bright and early at the crack of 3 AM by the "game wardens" provided graciously by State Og, and loaded into a truck bound for the "fun zoo". The fun zoo is currently known as the "State Og Salt Mine," but please disregard this as it is a zoo containing boundless amounts of fun. You will be issued "fun equipment" including a pick axe and bucket for your upcoming "fun activities". Do not attempt to hump the bucket; it is not a gazelle.

DAY 2 LUNCH - Feel free to lick one of the delicious and fun "salt licks" you have uncovered while enjoying your "fun time activities" in the "fun zoo". Do so at your own risk however as the "game wardens" are constantly on the look out for shiftless animals. Even though there might be a giant furry head on a rock, do NOT hump the rock! Chances are somebody simply left his furry head mask on the rock while he went to get a drink of water from the "fun water bucket" or left to hump a different rock.

DAY 2 AFTERNOON - After you have enjoyed your delicious and "fun" salty treats, you will be assembled into rows and inspected by Japanese and Arabic "wild life supervisors". Please do not be alarmed if you hear reference to "buyers" or "white slavery"; the "wildlife supervisors" like to joke and have "fun". DO NOT ATTEMPT TO HUMP THE "WILDLIFE SUPERVISORS"! Any humping that occurs during this important wildlife survey will result in some sort of punishment with EXTREME PREJUDICE, most of which involving automatic weapons fire.

DAY 2 NIGHT TIME - Those of you who were in LINE A will be returned to camp. Do not be alarmed by the men in uniform emptying out your luggage and searching for valuables. Just drink the soothing and relaxing punch offered to you. We promise the next chapter of this adventure will lead you to an exotic land and pleasures unimaginable.

Doesn't that sound like a heck of a lot of fun? We promise that you won't be able to complain under any circumstances! According to those wacky folks at State Og this is a gag order reinforced by hypnosis and under the penalty of further time in the "fun zoo".

Did Somebody Say Fire?!

K-Dog has once again cooked up another scorchingly hilarious Fireman comic for us all. Here, just have a look:

Honestly, I'm glad I lead with the update, that was hot, hot, hot. Will those silly elves ever learn not to deny a fireman his rightful treasure? I think you and I both know the answer to that.