How To Properly Camp Out For A Console

In recent years, it has become increasingly commonplace for gamers to not only wait in line to buy a new console the day it comes out, but to camp out in that line for an entire night or even several days beforehand. The Playstation 3 doesn't come out until next Friday, and people are already lined up, shivering in lawn chairs outside Wal-Marts across the country. They're doing the same for Nintendo's Wii, which won't be released until two days after the PS3. These people are not normal, and I am one of them. 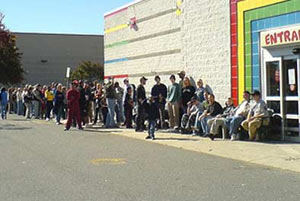 I'm not quite sure what it is that drives this compulsion. Video games don't fill an empty spot in my soul where a healthy social life should be. On the contrary, I have a terrific best friend in Zack Parsons, whom I email at least once every few months for help with very stupid problems I encounter while preparing my updates. I also leave the house every day to walk my dog. Sometimes we walk all the way down to the gate. Everything about my life is perfectly fine, enviable even, but when new video game hardware rolls around I feel the need to bring it home the day it's released.

So why wait in a line for several days? One reason is obviously to ensure that you get a system from the store's limited stock, but there's something to be said for the sense of camaraderie one encounters while braving the elements with a group of like-minded individuals. It can be liberating to be surrounded by people who have so many things in common with you, from their passion for video games and their misguided fashion senses to the "Samus Aran nude" entries in their Google caches.

Whatever your reasons may be, if you're determined to wait in line for a video game system then I am here to lend a hand in making your experience relatively painless.

Tip #1 - Show Up As Early As Possible

Unless you're reading this while in the line for your console of choice, you are probably too late. Sorry! If you make a mad dash right now, though, you might get a good spot in the line for the next round of consoles that will be hitting shelves in 2010.

It would be nice if man could subsist entirely on his daydreams of playing a lightsaber game on the Wii, but unfortunately that's just not possible. Yet.

For now, the old standby of beef jerky and Gatorade will have to do. Beef jerky is great because it has all the major food groups (the spices), and its waxy coating protects the meat when the jerky is dropped into a puddle of motor oil and tobacco bits. Gatorade is also great because it replenishes all those nutrients your body loses from getting boners all day and twiddling your thumbs on your lap to hide those boners.

You'll probably be in line for at least an entire day, if not more, and as far as I know it's impossible for the human body to remain standing for more than three minutes at a time before severe injuries set in. That means you'll need somewhere to sit.

Most people choose to bring a simple folding chair or a comfortable sleeping bag. These people are wrong. What you really need is a wheelchair, preferably your grandmother's. Not only is a wheelchair comfortable and mobile, but it nets you some serious sympathy points which could translate into the store manager letting you inside first when your console goes on sale.

Many stores have adopted a policy that forbids people from holding your place in line, making trips to the restroom an impossibility. How can you deal with this?

The most obvious option is the one-two punch of a colostomy and a permanent catheter, completely eliminating the embarrassment of going to the bathroom in public. As an added bonus, after you bring your console home you'll never worry about hitting the pause button to run to the bathroom again. It's a win-win situation.

For those of you who are unreasonably adverse to unnecessary surgery, a leak-proof briefcase is your best bet. Relieving yourself into a glass jar or a mostly empty plastic soda cup from Taco Bell demonstrates a complete lack of class, but doing it in a briefcase says "I'm an important person who's really going somewhere. In five days. To play a video game. And that somewhere is home." 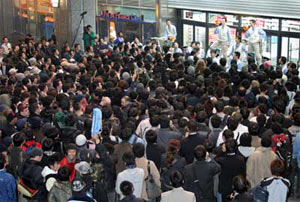 Nerds are generally shy by nature, but by the fourth day of waiting in line you should be able to exchange a nervous nod with the person next to you. By day six, you'll be ready to exchange names. After this sudden whirlwind of conversation you may find yourself grasping for something to talk about, so here are a few suggestions:

While you're socializing, be on the lookout for an unsuspecting potential mate. It's very rare to find a special someone who is fanatical about video games, so if you come across a mildly attractive girl or guy in line with you then you were obviously meant to be together forever. To be absolutely sure that you are compatible for a love match, determine precisely how awesome he or she thinks Star Wars and The Lord Of The Rings are.

Bring along a Nintendo DS if you can. Most people in line will probably have one, and you can kill quite a bit of time facing off against each other in wifi games. Be sure to react loudly to everything in the game, broadcasting what's happening as if everyone cares.

"Argh! That guy just passed me! Shit! He just bumped into me! Woah! I just pressed the power button! Dude! I just closed the DS and put it away!"

Some reading material would also be good. If you collect a few articles and advertisements for the system you're getting, you can obsess over each trivial detail to get the most information out of it as possible and understand your console more than those other chumps. Hmmm, that advertisement shows the PS3 standing next to a Rubik's Cube. Does that mean that a virtual Rubik's Cube game will come on the hard drive, and you'll be able to tilt and twist the cube with the completely original motion sensing Sixaxis controller? This clearly warrants another hour and a half of reading through the gaming magazines' previews of the system.

The enemy lurks among us. He takes on a thousand different forms and appears in a thousand lines, but he is singular in purpose. He is the eBay Asshole.

The eBay Asshole knows that consoles are difficult to get ahold of when they first come out, so he takes a spot from someone who actually wants one in order to sell the system on eBay for a profit. These heathens can be identified by their beady eyes, razor sharp talons, and a general indifference toward your argument that Mutant League Football was the most accurate representation of mutant sports to ever grace a console.

If you should spot an eBay Asshole, alert the authorities immediately. Do not attempt to apprehend him yourself, as the eBay Asshole is armed with the delusion that there is nothing wrong with what he is doing and your arms have basically no muscles.

Tip #8 - Shield Yourself From Shame

During business hours, hundreds if not thousands of normal people will walk by you on their way into and out of the store you're camped out in front of. Naturally you will want to keep your eyes downcast, but it is inevitable that you will look up momentarily only to see someone looking at you with disgust or pointing and laughing. The only surefire way to deflect this type of attack is to hold a mirror in front of your face, turning your attackers' hurtful reactions back upon themselves.

While you and I have built up a sort of immunity to the aspersions of others over the years, most normal people have not. As a result, when they are assaulted with a sudden blast of their own derision the results will most likely be devastating. Bring plenty of bleach to dissolve the bodies.

Tip #9 - Advance Your Position In Line

The only way to be 100% sure that you're going to get a console is to be the first person in line, but chances are that you've been angrily staring at that guy for hours, hoping for your latent telekinetic powers to kick in and stop his heart. That might not work.

The best way to advance your position in line is to smell as bad as humanly possible, pushing your competition's gag reflexes to the limits until they run away, abandoning their spot. You'll need to smell bad before you get on line, which requires that you go twice as long as usual without taking a shower. For most of us this should be about 14 days.

If you follow my tips and all goes well, you'll make your way to the front of the line in no time and have everything you need to survive the remainder of your journey in comfort. Good luck out there, comrades.