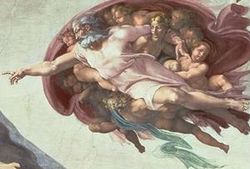 God...we have to talk. I'm afraid we've done some reorganizing in your department.

We here at Philosophy Sunday believe strongly in accountability. We also believe in typin' words and makin' G's. Today, we hope to combine these interests while at the same time providing an important community service.

God. We've all heard of him. Some of us have even had personal relations with him (a suspiciously large number of us, if you ask me). But what is he like, really? Does he ever get bored knowing the outcome of everything before it happens? Could he grant me magic powers right now, but chooses not to, or can he only work within the laws of nature? Just what did he find so attractive about Mary anyway? Today I hope to answer not a single one of those questions. Hell, I've already written the article, so I know for a fact that I didn't answer any of them. I don't even know why I just wrote them down.

The only question we'll be answering is one we don't even have to go to the big man himself to ask: Is God doing a good job with the world? Today, Philosophy Sunday is giving God his first ever annual performance review, in which we consider how the world's events reflect on his character and abilities, and then we make fun of him a lot. The structure of this review is simple. We'll look at a world event from the last year, and we'll decide whether it should constitute a positive or negative performance rating. Then, when we get tired of typing, we'll stop doing this. Then we'll arbitrarily decide if God is doing a good job. Let's get started!

I think we’ve gathered enough data now to make our decision. Looking over the events of the last year, and considering that question, I have concluded it doesn’t matter even the tiniest bit what I think about the issue. Or what you think about it. Or even what the pope thinks about it.

Because, honestly, even if you thought that God was doing an incompetent job of handling the world (and I think you could probably make an argument for that) how exactly do you go about giving God input? How exactly do you tell God that he has to step down and let someone else have a go? I guess what I’m saying is we kind of have to live with the dude as long as he wants to live with us. Better start trying to get on his good side now.

God, have I told you that you look great today? Just terrific. Email me at maxnmona@somethingawful.com if you want to hear more about what a seriously great guy you are. (You’re great.)

Big thanks today to my man DocEvil for his great animated gifs that show a stunning and vivid vision of the afterlife. You the man now, doc.