The proliferation of rap music and the decline of our public schools caused this image to be created.For over six hundred years street gangs have been an American institution. By using violence and intimidation, gangs claimed territory and ran others off their land, much like the United States of America did in its rebellious years. But unlike the United States, gangs lacked fiat currency and the manifest destiny it takes to make it all good and legal.

Still, street gangs persevered, becoming as beloved as a million Dennis the Menaces could be. But instead of slingshots they were packing gats. They were killing motherfuckers since the slave ship, with the same clip, with the same .45. Their idealogical leaders were visionaries such as Biggie Smalls, who penned the above scripture, and Snoop Dogg, whose real name is Calvin Broadus, a fact that the news media has a boner for and mentions at every opportunity.

By the mid-90s gang membership reached over 11 billion and street gangs controlled a territory roughly half the size of Alaska times three divided by the number of good things to ever come out of Florida (DIVIDE BY 0 ERROR). Within these massive organizations inefficiency began to brew, the worst kind of -ciency. Much like the Ottoman empire, gangs became too big to control and began to crumble.

By the turn of the century gang membership dwindled down to the last six guys who happened to own doo-rags and they were much too lazy to do a drive-by. Gang-related homicides were down and street gangs were on the endangered species list. Gang members of various affiliations began to wash up on beaches only to be nursed back to health by researchers at Sea World and released back into the wild. If our beloved gangs were to survive, something had to change in their organizational structures.

That change, my friends, was the Internet.

Many gangs brought their operations online. Using the same tools that we've been using to mock those with different beliefs than us and stalk girls, gangs restructured, eliminating on average 54% of overhead and 63% of bustas.

Today, I'm going to take you into the online world of street gangs. You'll learn how gangs have adjusted to the information age and you might even learn a thing or two about yourself. 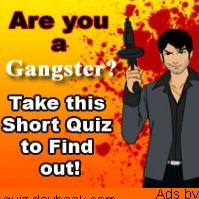 I'm not a gangster, but I found out that I'm most like Knuckles from Sonic the Hedgehog.Many street gangs have consolidated their operations into web sites such as the Street Gangs Resource Center. Here, gangs support themselves with ads for GANG WAR RINGTONES and "Are you a gangster?" quizes, eliminating the need for petty theft jobs that just waste precious resources, leaving gang members more time to run up on niggaz and/or vatos. Music has been provided on its front page for readers to enjoy, getting them pumped up for the gangbanging to come.

Here gangs can read the latest quarterly reports. Gang-related murders are way down this year team. We have a long way to go until we reach 1992 levels of mayhem!

Though by far the greatest tool in the gang's online arsenal is the Internet forum. Here, gang members can keep in touch and inform each other of ballin' activities such as drive-bys and birthday parties. Today, gang initiates are not "jumped in". The process has been streamlined into a system where potential gang members plead their case to forum moderators, post their resumes, cover letters and references, and if they meet all the "criteria", they're in.

Unfortunately as with any Internet forum drama can brew when applicants aren't allowed in.