The Origin of Neon Colors

How is neon created? Why is it making a comeback? These are the questions they do not want you to ask. Many people are infatuated with the unnatural colors, but very few know the troubling past behind their creation. Since the discovery of neon pigments in the nineteenth century, millions of people have died in the production of the colors. Aside from a few rebel neon producers, one company (the CCC) is responsible for the world’s supply of neon. Though globally ignored, every nation understands (and fears) the powerful organization.

Neon peeked in the 80’s, when one out of every three American owned a piece of clothing decked out in the glowing colors. To produce such high quantity of pigmentation, the CCC was forced to collect impossible amounts of corpses (one of the prime ingredients of all neon pigmentation) for the sake of matching demand. It is no coincidence that the first wave of neon fashion runs alongside the introduction of AIDs in the world.

Experts believed that as neon faded out of fashion so would the infection, but that is not the case. Instead, the CCC has made new attempts to introduce the fashion in mainstream America. Their primary agents, including American Apparel, Urban Outfitters, Kanye West, surrounding posse, and other hipsters, have reinjected the craze, and new waves of killings have begun.

However, the AIDS epidemic was not the CCC’s first foray into global issues, for their power stretches back over 100 years. The brilliant sheen on your sneakers comes with a long and troubled history that is shrouded in secrecy. In a possible multi-part piece, I hope to expose the repulsive origins of this inhumane color spectrum one color at a time.

One of the earliest and most popular neon colors, Electric Blue has nothing to do with electricity at all. The color is actually one of the two byproducts when silver nitrate is injected into the veins of a living human. The other byproduct is a corpse. A Prussian scientist, Dr. Busenitz, discovered that as the foreign fluid travelled through the body of the patient, the subject’s muscles gelatinized and turned the glowing hue we all know. Though the original experiment (an attempt to cure fits of hiccups) failed, the scientist is credited for finding both the first neon pigment and the most painful method of death. Through further experiments, he found ways to bottle the blue fluid and processes to funnel the fluid through the scalp to avoid the liquefied muscles from blackening and burning prior to the patient’s death. Once the sizzling of the body becomes louder than the screams, Dr. Busenitz would stop applying silver nitrate. The glowing corpses would then be put out on people’s doorsteps as Dr. Busenitz knocked on the door and ran into the Prussian woods. The startled people, believing they were witnessing a ghost, would often shoot the corpse, and the bright fluid would spill out onto their porch where porters were sent to collect the ethereal spillings. For that reason, the original name of Electric Blue was Ghost Blood Blue. Soon people were putting out treats and ghost traps in an attempt to hunt the glowing bodies. When the doctor began to grow tiresome of his pranks, he began siphoning the brilliant fluid into airtight containers ready for sale. Thus was the creation of the CCC. 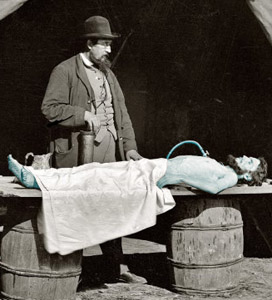 Determined to make the best color imaginable, Dr. Busenitz attempted to find the most pure pigmentation. The muscles of women, preferably young women under the age of fourteen, seemed to give the brightest color, though it should be noted that they also have the lowest muscle density. During the early days of Ghost Blood, it was still easy and cost effective for the scientist and his trained color practitioners to acquire prostitutes; however, as the market for the rare color grew, the practitioners moved to other types. The shift from young women to older women and ultimately men can be seen in the late 1820s. Though the glimmer was a little less vibrant, the market continued growing. The rarest Ghost Blood made from the young women of royal Prussian families was still available for the richest and most powerful courts in the world, including numerous kings, queens, barons, and filibusters of the century. Like the furs of an extinct animal, the richest men of the world sought to paint their most prized possessions in the hue.

Martin Van Buren was the first U.S. president enticed with neon. Believing the substance to be crafted by aliens, his desire to obtain neon eventually consumed his daily life. Numerous accounts exist graphically describing his public bowel movements and appearances in front of congress nude with only a ring of glowing blue around his mouth. One story involving the White House chamber maid and a gallon of neon earned him the nickname the “Little Magician.” At the threat of “getting cut real bad,” congress gave full control of the navy to Van Buren, and during his presidency his military actions account for the majority of fresh subjects acquired by the CCC, as the navy collected prisoners of war in every conflict throughout the late 1830s and early 1840s in Peru, Argentina, Mexico, Sumatra, Fiji, China, the Faulkland Islands, and Canada. The stories of these P.O.W.s was grim, for their lives were worth a pittance of the quantity of Ghost Blood their supple bodies stored. The secret practice was outlawed within the first week of William Henry Harrison’s term in office. He died three weeks later of “pneumonia.” 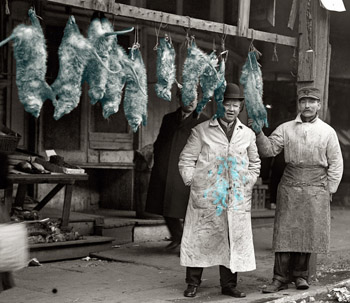 With the help and finances of Victor Victor, a millionaire financer and publically known sociopath (more information on V. Victor can be found in the Neon Red section), the burgeoning color industry grew beyond the small organization founded by Dr. Busenitz and into an unmentionable superpower. Evidence hints towards the CCC’s involvement in the Civil War, though such claims are uncertain. It is clear, however, that by WW1 the CCC had moved beyond human subjects to obtain Ghost Blood. The great grandson of Dr. Busenitz discovered a method to infuse human tissue into opossums, allowing the color to be mass produced without being a drain of human life. For his discovery, he was given a Nobel Peace Prize and murdered by a follower of the Cult of Martin Van Buren. Since the CCC could acquire fifteen opossums for the price of one child, price dropped drastically. Because of this production shift, it is believed that Ghost Blood, then rebranded to the world market as Electric Blue, was the first neon color to be produced for the common man.

Electric Blue is only the first of numerous neon colors to be exposed. If interest is shown, further secrets shall be revealed.