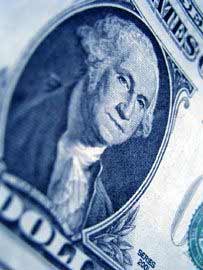 You know you want it, and now you can have it!As a reader of Something Awful, you are most likely aware that we are all about writing hate speech on the Internet. But a little known fact is that we are also about making lots and lots of money. We are proud to put the "sell" in "sellout," and by that I mean we sold ourselves out wholesale. Long ago, we gave up trying to be genuinely funny for fun, and instead decided to pursue a path of endless profits and decadent riches. Hell, I stopped writing actual articles over a year ago because it just wasn't financially viable for me to invest my time doing anything that didn't involve spending money. No one noticed, because that's when I started using a fairly crude mad libs program I downloaded off of IRC to generate fresh content each and every week. I've obviously learned a lot about money along the way, as anyone involved with the endlessly booming Internet industry does, and so I'd like to take some time to share with you my tips for success. With my advice, you will learn all the quick shortcuts for making money while doing next to nothing. With that extra time, you can do like me and spend hours staring vainly into a mirror, admiring that corpulent reflection of perfection.

The first lesson in becoming financially successful is to familiarize yourself with the tools of the trade, or money as it's widely known amongst the professionals. Money tends to come in several forms, including paper, coin, and credit. You will note the coins are metal, and almost always round. I'm not sure why coins don't come in other shapes, such as stars, clovers, squares, or triangles, but I think it may have to do with the cyclical nature of circles. With circles, everything always comes back to the beginning, similar to how an economy should operate. This is not unlike the minstrel cycle women go through, which was in turn named after the traveling musicians that visited villages once a month to sing nagging songs. Money differs from country to country, but paper money is commonly rectangular in shape, and features lovely designs hallmarked by pictures of dead people. You will note that these old gentlemen (and sometimes ladies or Canadians) served as leaders in times long evaporated from the present. Credit is the most peculiar type of money, because it exists only in record and often shares a symbiotic relationship with your bank account, which is where you stick the money that isn't gestating in your wallet.

Now that you have an understanding of money, the basic building blocks of a capitalist economy, you can start making lots of it. Some will tell you that the best way to get money is to earn it through hard work. I disagree, because I am tender like a woman, and work would all but destroy my free and gentle spirit. Instead, I recommend investing in things that are going to rise in value. That way you can sell them for more than you paid, turning what we in the know call a "profit." Seeing as how you are a novice to this whole new economic world of instant cash, allow me to give you a good overview of the kind of things you should buy, as well as the kind of things you should start selling if you haven't already. 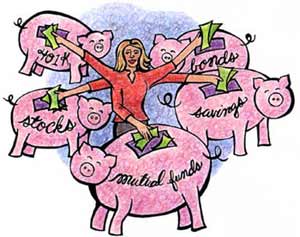 Investing is somewhat complicated but does not require extra arms as this picture would seem to suggest.

Endangered Species
Right now there are millions of animals near extinction. Supply and demand dictates that the less of an item is available, the greater the demand for it. Endangered species are rare, and thusly quite in demand. I recommend starting your investment portfolio by getting a hold of as many endangered creatures as possible. The good thing about an investment like this is that it can often be done without any money save for what it costs to build or purchase traps. Once you have your endangered species secure, put them in a safe place like a basement or tool shed. Then you wait. Sooner or later you will hear about extinction, and that's when you make your move. You will blow people away by seemingly resurrecting a species and make a killing at the same time!

"Highlander" Memorabilia
The "Highlander" movie and television franchise captured the imagination of a generation, and spawned an entire industry. Every week people of all ages were glued to the ongoing saga renowned for its sword fights and drama. You would be an absolute fool not to sign yourself up for "Highlander" merchandise catalogs and buy your weight in awesome swords and capes. If you run out of money to continue buying this stuff, simply sell your dignity. There won't be much left anyway.

Hydrogen
In the coming decades we will slowly be transitioning into a hydrogen economy, eliminating the need for fossil fuels. Now is the time to get a head start on the hydrogen highway! Invest in bulk, filling closets, shelves, garages, and storage sheds with all the hydrogen you can afford. When the market first opens, you're going to be in a prime position to profit like a banshee.

Something Awful Merchandise
As a personal favor to my boss, Richard "Lowtax" Kyanka, I must plead with you to purchase valuable Something Awful merchandise. Let me tell you, this represents a premium investment opportunity, as right now this merchandise is just waiting to skyrocket in value once somebody removes it from the dank, moldy, asbestos-laden warehouse Rich rents in the local red light district. Once you clean the rat feces off, you've got yourself wearable money!

Other Commodities Worth Investing In:
Egyptian cotton, Louie Anderson murder contracts, hair extensions, Iraqi flags from before the regime change, skeletons of dinosaurs and/or historic figures, magic reagents, and fine Indian spices are all great investments.

Children
It is said that children are our future, but unfortunately that is wrong. Unless they find a way to transfer our brains into the bodies of children, there is no way for that statement to be even remotely true. However, there are those who still believe such crazy old wives' tales, and they are a prime market for selling unwanted children. If you have children, I recommend unloading them immediately. The returns are nowhere near the expenses of childrearing, so drop that dead weight! If you don't have any children, know that they are plentiful and can be found virtually everywhere, especially around schools and playgrounds. They are worth a lot of money to the right kind of people.

The Elderly
If children represent the future, then the elderly represent the past. Investing is a progressive endeavor, not one to be chained up by the shackles of age. Science can use your unwanted elders for important experiments beneficial to us all. Sell them immediately and for whatever you can get. Medical cadavers aren't worth as much as live subjects.

Oil
Oil will be a thing of the past in several decades, which kind of means it's a thing of right now. Right now is an ideal time to sell any barrels of oil you are holding onto, because gas prices are only going to get lower in the near future. If you have any oil reserves in your yard, sell the drilling rights as fast as you can. If you need help with that, let me know. I have a shovel and I'm available weekends so long as there are sandwiches on the table and a fair share of the profits. Actually, I don't really want to help dig for oil, but I'd be happy to help with the sandwiches. Eating them, that is. You have to make them.

Now don't think for a minute that I've told you everything. Investing does require some work, but it's all common sense when you get down to it. It's about anticipating needs for the future, and selling before those needs have been fully satisfied. It's a lot like shooting a gun, except your bullets are filled with potential and your target is success. If you shoot right, you can succeed. But if you shoot wrong, you waste your potential. Actually, it's nothing like a gun at all, especially since you can invest in guns. If investing in guns was like a gun, then that would probably be a paradox of some sort. I highly recommend carrying a gun, though, because you never know when a business deal is going to turn sour. Also, I recommend not conducting business in dark alleys or parking garages, because that's just asking for trouble. Good luck in your future successes!

...The next seat to your right is much more comfortable. We'll give your crappy folding chair to Frank Agrama, director of "Dawn of the Mummy." It just so happens that I, by which I mean Ben "Greennipple" Platt, have had the pleasure of watching this piece of, as the French say, "crappe." And now I want to share the experience with you.

Setting the standard for every other movie to come in the 1980s, right after the title screen comes some cheesy synth song played over a montage of the various models walking down various streets in New York. We then bounce right back to Egypt, where the models are traveling in search of a good background for their fashion shoot. That's right, the entire New York scene is just them walking. No dialogue, no character development, it doesn't even introduce the plot device of the models' trip to Egypt. Just try to calculate the amount of money wasted by having one single, moronic city scene in a movie that is otherwise nothing but desert shots. Then weep at the realization that that's more money than you will ever be able to waste on anything in your life.

This movie hurt me. Help me strike back. Read the review and find out how!