Granny Henderson thinks video games are the devil.Initially, I had refused to review Gunz Online on the basis that most people that know bad MMOs have either played or heard of this atrocity. As a game gains some kind of popularity, either for good or bad reasons, people tend to make fun of it. Once it has been driven into the ground much like any internet meme, making jokes about it tends to lose it's fun and originality. For this same reason I will never review Furcadia, World of Warcraft, Everquest, DAoC, or any well known MMO. Not saying that Furcadia should be clumped with actual MMOs but that game is so laughably horrible that it has it's own kind of "ha ha look at this piece of crap" popularity.

I think I may make an MMO one day. It really doesn't seem very hard to mash the basic components of today's massively multiplayer games into a grotesque package of filth. In preparation of the next best MMO I have compiled a detailed list of all things that Gunz Online (and other MMOs) employ to guarantee success!

Soon I will be rolling in all sorts of currency when my game, Zombie Anime Monster Truck Rally Online: The Pain Bringer hits the theoretical internet shelves!

Gunz online can actually be fun if you drink heavily and listen to the heaviest metal (osmium) while shooting other players in the face. However, even with all of these conditions the fun lasts approximately ten minutes and then you search for anything else to do. Hell, even searching for something to do beats actually playing Gunz Online. Perhaps I am just spoiled by the simplicity of World of Warcraft and my ability to delay gratification has long been destroyed but when I play a game for a good half hour, come out on top with the most kills and experience, and still only receive sixteen of the game's currency when a weapon costs thousands, I become a tad discouraged.

One interesting game mode involves running through dungeons and slaughtering hordes of monsters in an environment that resembles the Lord of the Rings movies. You know when Merlin the wizard tries to fight Diablo and the stone bridge collapses and they go to hell? That part is basically in the game but replace Merlin with your dumb anime character, his staff with your character's replica katana, and Diablo with some stubby little orc in armor. 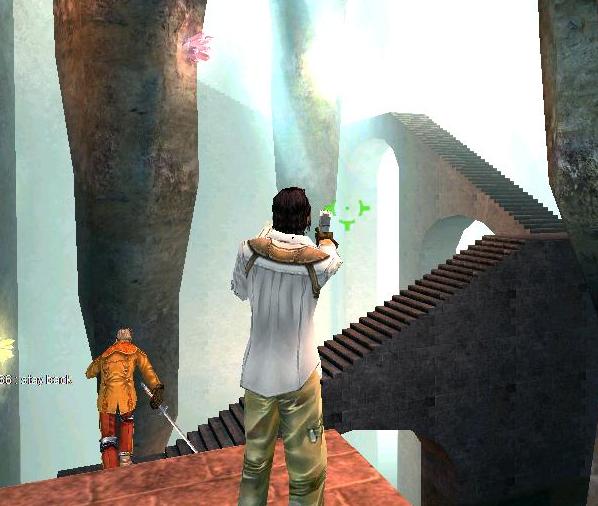 Why does this look so familiar...? 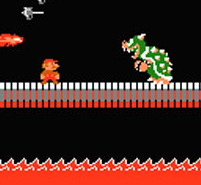 Mario did it first.I have to admit that after spending an hour bored out of my mind in the normal game, the quest mode seemed refreshing. However, this became short lived when I found out that I had to grind level after level in the main death match mode to continue my quest into Mordor and the volcano that destroys the [+1 Ring of invisibility].

The Gunz Online community easily falls into the Battle.net category of every online MMO which probably comes to no surprise. Most people are hilariously bad at this game and once you dominate them in the ancient sport of online gaming they tend to blow a gasket. Throughout my Gunz Online experience I believe I had been called a hacker, cheater, or Hitler more than a few hundred times. Even if I were in dead last and managed to kill someone with an inferiority complex (see: entire community) they would get the nails and the cross. That's right folks, I am comparing my online persecution with the crucifixion of Christ. Interesting fact: creating an MMO is eerily similar to creating an organized religion including the anime. I am not kidding, there is actually a bible to appeal to the brain dead youth that sit around writing fan fiction of Dragon Ball Z and Sailor Moon crossovers.