Your Idiot Kid Doesn't Need to Watch Movies All Day 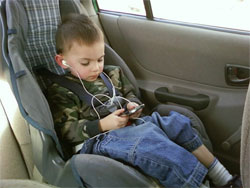 It's weird how when I was a kid and walking around outside or in a store I would, you know, look at stuff and do things. Who are these little kids walking around in public watching movies on a smartphone? Does your child truly need constant Pixar exposure? What year are you from?

Most folks who have been alive in the industrialized world in the past year or two have probably seen it, too: a parent with their kid in tow, marching through a store or other public setting, and the kid is gripping an iPod or the parent's iPhone and watching a movie on it. This all happens in public, without shame or regard for anything else. In fact, earlier this week I was in a Target and saw a boy not more than 5 or 6 standing and watching a movie on his, all alone, in the TOY AISLE.

Kid, you are in the TOY AISLE. PUT THAT THING DOWN WHAT ARE YOU DOING.

It's not so much that I object to kids being placated or watching any movies, because I don't in theory, but it's now the rule rather than exception that a child must be tranquilized at all times, it seems, by high technology. Rather than letting your son or daughter explore the world around them within reason, it seems far preferable for working parents to placate them with gadgets and just drag them wherever they need to go. It happens in stores, restaurants, in the car, everywhere.

Unfortunately, this means your shit-for-brains kid is going to grow up with a lessened reasoning ability because rather than learning about their surroundings, they simply watched Shrek 2 about 60 times and have no idea what is going on. In effect, as a parent you have chosen a form of neglect for your child. You are stunting their mental growth.

Which brings me to an aside: If your idiot child needs a movie in the car to make it through an hour-long car ride, that's a supremely-shitty kid you've got there. Don't suggest it's some genetic issue that requires a kid to be in front of a gadget all day-- there were only hundreds of thousands of years before gadgets that human kids grew up in. You have almost undoubtedly conditioned the child to be this way, and for that you are probably a bad parent. 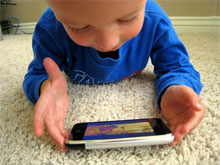 Frankly speaking-- and I don't care who you are, really-- nothing you're doing beside your parenting is so important that you need to put your child's development on hold day in and day out. Nothing you are doing at work or anywhere else in your life is so important that you have to put your child in some kind of fuck-off gadget stasis for their formative years. You are not that important. Your child is actually more important than you, in case you forgot. Get the fuck off of Facebook or Classmates.com and talk to your shitty kid.

Parents, I must ask: When does it become just too much to be the same parent that every generation previous to you had been? When did you give up and stop trying to live up to the same standard? At which point exactly did you just throw in the towel and get the iPod Touch because you can't stand answering questions about why planes fly or how cars work or whatever else curious, brilliant children ask? When did it become easier to just put on a movie and not talk to them?

Obviously you can parent how you want, just keep in mind that no great person in the future will ever say, "Yeah, as a kid I watched the same movies over and over for years. Want to hear me recite Cars?"