In our slightly belated edition of Current Releases this week we're going to be taking a look at two very good films. Firstly, Martin R. "Vargo" Schneider enjoys the violent beauty of The Raid 2, then Sean "Keanu Grieves" Hanson gets excited about haunted mirror movie Oculus.

EXPECTATIONS: I absolutely loved The Raid: Redemption, and this is looking to have more of the same "punching and kicking dudes really really fast" formula, which as I learned last time, is really all I could ask for. All the promotion for this seems to be centered around this films expansive cast of characters,however, all of whom seem to have their own "gimmick". I compared the last Raid movie to a video game, so it just makes sense that the boss battles are being pushed to the forefront. Button mashing time!

REALITY: Y'know what doesn't get enough attention paid to it? The "arts" part of "martial arts." The first Raid film reveled in grit and intensity, but with the blessings of a bigger budget, The Raid 2 explores the potential for beauty amongst all of its bloodiness. It does this through incredibly accomplished cinematography, a fantastic score and thoroughly-choreographed sequences of dozens of people kicking the crap out of each other. 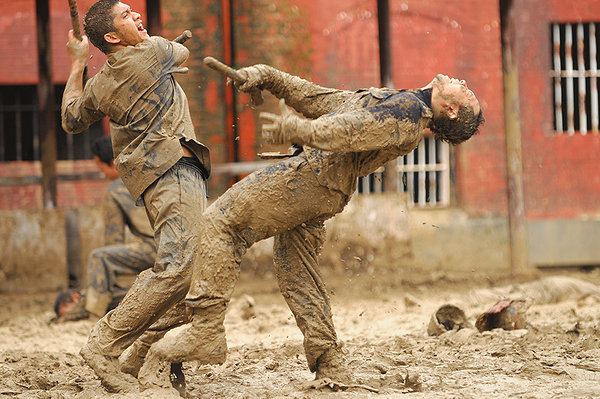 
Raid 2 picks up immediately after the previous film, and then time jumps several months later to show supercop Rama (Iko Uwais) joining a task force dedicated to sniffing out dirty cops. Rama allies himself with Uco (Arifin Putra), the son of a major Jakarta crime boss named Bangun (Tio Pakusadewo). Bangun struggles to keep a long-standing truce with rival family Goro, while Bejo (Alex Abbad), a new face on the underground crime scene, threatens to disrupt the balance of power between them. As Uco becomes more ambitious and violent, a war between at least two of the three parties becomes more imminent. This is a very short paragraph, but we've already got double the amount of plot that The Raid had, very little of which actually involves Rama. (Y'know, the guy that this movie is supposed to be about?)

This is actually where the film takes its biggest misstep. I actually greatly enjoyed the simplicity of The Raid's plot, because it did what it had to do: Serve as a narrative device to get us from fight scene to fight scene. It didn't need to be any more complex than that, and it wasn't. When you expand further than this basic functionality, however, a lot gets called into question. It doesn't matter that Rama is a non-character when you're telling a non-story, but when you add extra complexity, it becomes apparent that he just does not fit into the world they've placed around him, and that he doesn't have any background to emotionally connect him to the audience. Why should he? He came from a film that didn't need any. Likewise, since there's more screentime for the villain in this one, those comparisons are essential as well. While I enjoyed Putra's performance, he's nowhere near as interesting or memorable as Ray Sahetapy's Tama. Essentially, we wind up with a film that's been stretched to two-and-a-half-hours to include a lot of plot bloat, most of which stops mattering by 90 minutes in anyway. 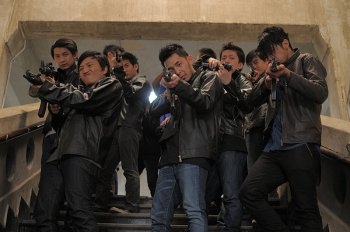 Cla-click. BADDADDADDADDA!As I mentioned earlier, the artistry, cinematography, and set design of this film is astounding, and strangely Kubrickian. Besides aping the trademark triangular framing at every opportunity, Director Gareth Evans expands the film's battlegrounds beyond the crowded slums of the first film into grand sweeping red-walled restaurants and stylishly lit nightclubs. Fortunately, the film doesn't completely lose the sense of claustrophobia I loved from the first film, and the best sequences take place in small spaces like a bathroom stall, a prison yard, a car. What I appreciate the most about the fight scenes in this franchise is the sense of geography, which I've talked about before. The obvious understanding of where things are, where people are, and the distance from one thing to another is key to a good action sequence, and while Evans can do this easily in a large room, it's the close-quarters work that shows off the mastery of technique from everyone involved. Further, even the most rudimentary art design serves to assist the film's main ideas. Most notably, an early prison yard fight culminates with every person involved, guard and inmate, being covered in identity-disfiguring mud. When it comes to real battles, everyone becomes equals, in keeping with the "every cop is a criminal" attitude from the last film.

Ultimately, The Raid 2 outdoes its predecessor on style and action, but it does so by including a ridiculous amount of excess that would have killed any lesser action movie dead. You can't have it both ways, franchise. Either you admit that no one cares about your plotline and is just there for the kicking and throat-stabbing, or you have to make the storyline and the characters better. If you want there to be emotional attachment to these fights, you have to be a lot better than literally naming your bad guys after the weapons they hold. ("Hammer Girl" and "Baseball Bat Guy", respectively.) Also, you can't get away with bringing the actor who played your last movies' penultimate badguy back, as a different character, with no explanation. As is, The Raid 2 is beautiful but disjointed, suffering from the fact that it frequently pushes its main character out of his own film. If you're really just there for the punching (and who among us isn't?), then this film will more than suffice. It's still the most artistic (and incredibly graphic) violence in theaters for years.