The geese are back, which means Summer is pretty much over. Perfect time to dump a whole heap of crap into cinemas, right? Martin R. "Vargo" Schneider kicks us off with The Cold Light of Day, a bland star vehicle for bland star Henry Cavill; then Sean "Keanu Grieves" Hanson endures Resident Evil: Retribution; Joseph "Jay Dub" Wade explores The Odd Life of Timothy Green; and Vargo returns to rave about Arbitrage. To close, Ian "Professor Clumsy" Maddison catches us up on the latest offerings from Britain: The apparently perfect Berberian Sound Studio and the evidently not-perfect Anna Karenina.

The Cold Light of Day

EXPECTATIONS: Boy, this thing just has "New Star Vehicle" written all over it, doesn't it? It's one of those movies that exists just to say "Hey, look at this guy! He's gonna be big! Seriously!" This never works, and you know why? It's the movie-star version of "But she's got a great personality!" If you need to sell us on someone this desperately, they're not worth selling. But on the other hand, this does come from Mabrouk El Mechri, director of the better-than-it-had-any-right-to-be JCVD, so go ahead, movie. Cram Brandon Routh 2.0 down my throat. Whatever. Let's just get this over with.

REALITY: One of the things you have to accept about action movies is that much of the time, the bad guys are infinitely more skilled than the good guys. It's a standard practice that's there to create tension and drama, and it's incredibly easy to understand with only the slightest disbelief suspension. However, when you have a protagonist with absolutely no special abilities and antagonists with seemingly limitless resources and expertise, at some point you just have to say "Oh, you gotta be freaking kidding me." 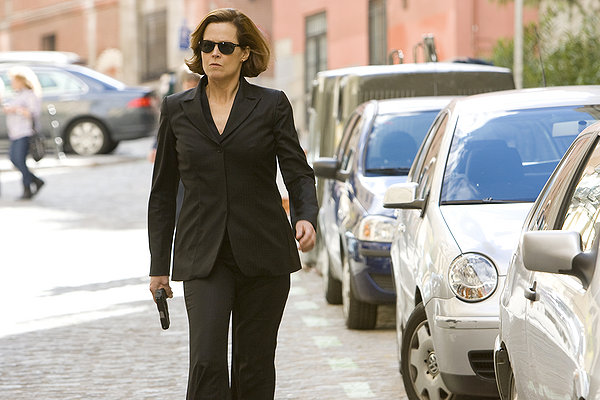 That's what we're dealing with here in The Cold Light of Day. (In case you were wondering, no, that title never starts to make sense.) Henry Cavill plays Will Shaw, a Wall Street trader on vacation in Spain with his family, and you know what let's just stop here. The whole "business guy who can't get away from work" trope? Why aren't we done with it yet? It's some of the laziest writing ever. All you have to do is have a character look at their cell phone and then boom, you've told the audience that this is all the character explanation they are going to get.

Anyway, while Will is off having a pity party about something, people kidnap his family because his father (Bruce Willis) is actually a CIA agent who stole a briefcase full of powdered McGuffin or was set up by Sigourney Weaver or something. You may think that this is a father-son bonding movie where Willis teaches Cavill how to kick ass and then they go get their family back, but no. Willis' character is killed twenty minutes in (Spoilers, I guess) and instead we're treated to a lot of shots of Will running in no particular direction. It's like director El Mechri watched the Bourne movies but was making a sandwich during all the parts where Jason Bourne actually punches a guy. 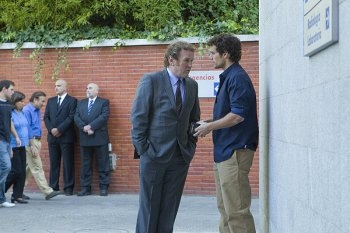 Oh hey, it's Colm Meaney. Remember him from good films? Well, now he's in this.I know that I'm always quick to denounce the "tactical realism" cries from moviegoers, but there is absolutely no reason why Will shouldn't be the easiest person in the world to kill. He doesn't have any Special Ops training, He's not a military experiment, he's not even a cop. He's a business consultant, which means he buys Men's Wearhouse suits and gets paid to say douchebag words like "corporate synergy" and "personal brand." And the antagonists are CIA and Israeli Mossad agents, all of whom are apparently completely incompetent. There's a scene where Will wins a fight because the bad guy literally falls on a knife. That's it, he falls on it, because the knife is sticking straight up somehow. The problem with this is that underpowering your hero does as much to destroy dramatic tension as overpowering him does. You can make him fall off buildings and suffer non-fatal wounds all you want, but at some point, the audience is going to realize that the good guy is going to win through sheer stupid luck. After the fifth or sixth time a CIA assassin barely misses this guy, you start to think maybe they just don't really want him dead.

That's not even the film's worst sin. (Although, wait, if the bad guys were watching Will's family, how did they not realize he wasn't with them? This entire film's premise is based on spies being complete fuck-ups.) No, the worst problem is that the movie is just so very bland. There's nothing here that's interesting or unique. It's stuff you've seen in other movies, just done by people who aren't very good at it. It must be very difficult to be a lighting technician in Hollywood, because apparently directors still don't understand that if you set a fight scene at night, nobody can see anything. That's honestly just as well, because there's nothing there to see. It's the natural evolution of Shaky-Cam fights, meaning the technique we're employing here is "Literally not showing who the hell is punching whom," or as we in the business call it, "having no idea how a camera works."

If you're on the fence about how you feel about Zack Snyder's upcoming Man of Steel, this film will not help. You can blame it on the script (written by the guy who wrote The Condemned), but the fact remains that Cavill is just not very good. He's about as blank as it is possible to be. He's like James Marsden without any of the charisma. That's right: This dude has less personality that Cyclops. At one point Cavill says the line "My father was killed and I'm wanted for a murder I didn't commit!" with absolutely none of the emotion that someone in that situation should be expected to have. Also, it just occurred to me that the wanted-for-murder subplot is never mentioned again after this line.

In The Rundown, there's a moment where Arnold Schwarzenegger shows up and tells The Rock "Good luck in there" because it's a symbolic "passing of the torch." This movie is just a sad reminder that someday all the cool dudes from The Expendables will be dead, and we'll be left with guys like this. Good thing we still have Jeremy Renner, right? ...Right?

MINORITY REPORT: Who is supposed to benefit from this film? Is this supposed to be our introduction to Henry Cavill: Action Star in time for next year's Superman movie? Is this meant to ease us into the idea of Bruce Willis's son kicking ass in next year's Die Hard sequel? Or is Sigourney Weaver trying to apologize for her part in last year's Abduction? Whatever the case, I don't think it's working. - Joseph "Jay Dub" Wade